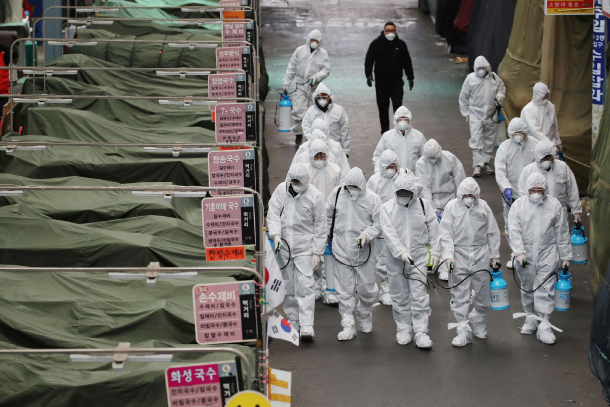 Four more fatalities from the new coronavirus were reported in Korea over the weekend, bringing the total death toll to six as infections skyrocketed to 602.

The Korean government elevated its official alert level for the coronavirus on Sunday to “red,” the highest in its four-tier system, in a meeting presided over by President Moon Jae-in and pledged to mobilize all resources to subdue the outbreak.

Infections remain heavily concentrated in a single city, Daegu, and the surrounding province of North Gyeongsang, with 495, or 82.2 percent of the total. Four of the six deaths are linked to Daenam Hospital in North Gyeongsang’s Cheongdo County, where nearly 110 other people including medical staff have contracted the disease.

A 40-year-old man in Gyeongju, North Gyeongsang, who died Friday posthumously tested positive for the coronavirus Saturday, officials from the Korea Centers for Disease Control and Prevention (KCDC) said. 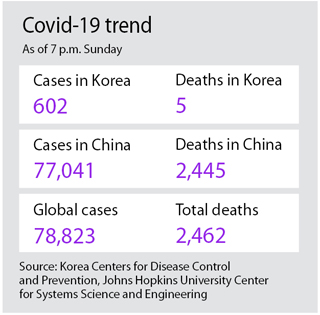 A 57-year-old man who was hospitalized in the psychiatric ward of Daenam Hospital before being recently transferred to Dongguk University Gyeongju Hospital in Gyeongju died Sunday morning.

He was one of the first two patients in Daenam Hospital who tested positive for the coronavirus last Wednesday; the other patient, a 59-year-old man, died Sunday night at the same Dongguk hospital in Gyeongju.

A 57-year-old woman hospitalized at Kyungpook National University Hospital in Daegu died Sunday afternoon while receiving treatment for the coronavirus and a kidney problem. Officials from the hospital and the Daegu Metropolitan Office said the patient had been hospitalized from Feb. 15 and tested positive for coronavirus three days later.

The KCDC said they were investigating all four deaths.

It was not immediately known whether the 40-year-old man and 57-year-old women were linked to Daenam Hospital or the Shincheonji church in Daegu.

By Sunday afternoon, 111 infections had been traced to the Daenam Hospital and 329 to the Shincheonji Daegu church.

Local health officials say they still don’t know for sure how the virus first reached the hospital or got into the Shincheonji church community, or whether or how the two are related to each other.

But Daenam Hospital was where a mourning altar was set up between Jan. 31 and Feb. 2 for the older brother of the Shincheonji church’s leader, Lee Man-hee. Many followers are believed to have attended the service.

The Shincheonji church is a controversial Christian sect known to have some 200,000 followers by some estimates. The Daegu church alone is attended by more than 9,000 worshippers, the KCDC said.

On Saturday and Sunday, 398 new infections were reported throughout the country, bringing the total number of infections to 602, which is the second-highest figure after China.

Among 602 patients, 329 people, or 54.7 percent, were described by the KCDC as either people who went to the Shincheonji Daegu church building recently or were in contact with churchgoers.

By Sunday afternoon, 18 people had been discharged from hospitals after full recoveries, while most patients were in stable condition.

Daegu Mayor Kwon Young-jin said in a press conference Sunday that a 4-year-old girl in the city appeared to have contracted the disease from her day care center teacher, becoming the youngest coronavirus patient in the nation.

It was the first time in Korea that a person under the age of 10 was reported infected by the disease, which seems to be most prevalent among middle-aged males. There are at least three other patients under the age of 20 - ages 11, 14 and 19.

Gangwon, Daejeon and Ulsan, which were the last remaining patient-free areas in Korea, all reported their first coronavirus patients Saturday. The virus has now officially spread to every single metropolitan city and province.

Seoul has seen 25 patients, many from Jongno District, central Seoul, where at least nine people got infected.

Daegu officials and health authorities said Sunday morning they were running down a list of some 9,336 people who attend the Daegu Shincheonji church to check whether they were experiencing any symptoms, and that about 1,261 responded saying they might be. They were all put through a virus test or were in the process, Daegu’s metropolitan office said.

Roughly 710 Shincheonji followers were said to be ignoring phone calls and text messages asking about possible symptoms. Daegu Mayor Kwon said Sunday if they don’t respond by that night, his office would devise “special countermeasures” with relevant government agencies to track them down.

Despite the Seoul Metropolitan Government’s announcement last Friday of a temporary ban on all public rallies on Gwanghwamun Square, Cheonggye Plaza and Seoul Plaza - the three most frequently used public spaces in Seoul for demonstrations - Rev. Jun Kwang-hoon, a Presbyterian pastor, led crowds of anti-Moon protesters to Gwanghwamun Square Saturday to call for Moon’s impeachment.

Exactly how many demonstrators attended the rally was not known but the organizers claimed 8,000.

Seoul Mayor Park Won-soon and scores of other officials from the Seoul government office arrived at the scene early Saturday afternoon to dissuade protesters from joining the rally, warning they could be fined 3 million won ($2,500) for violating the Infectious Disease Control and Prevention Act, only to be heckled.

Jun vowed to hold another rally this Saturday.

“According to epidemiological findings, there’s no case of contracting [the new coronavirus] when you’re outdoors,” Jun told the protesters, accusing the government of citing the virus as an excuse to ban his rallies.

“Even if our lives end here after getting infected by the virus,” he said, “we will still protect our country.”

The Jongno District Office said Sunday it filed a complaint against the organizers of Saturday’s rally with the Jongno Police Precinct.

Moon said Sunday afternoon in a coronavirus meeting at the Central Government Complex in Gwanghwamun, central Seoul, that the outbreak has reached “a very crucial watershed” in Korea and that the next several days will be “extremely important” for the nation to bring the contagion under control.

The Blue House chief called on Shincheonji churches and their followers to cooperate with government guidelines and asked protesters to stay away from big rallies.

The Education Ministry said Sunday it would order kindergartens, elementary, middle and high schools nationwide to postpone the start date for the spring semester by a week, from March 2 to 9, and monitor the situation closely to decide whether to delay the date again.

In a video uploaded on YouTube Sunday afternoon, Shincheonji spokesman Kim Simon urged the public not to discriminate against Shincheonji followers, saying they were the “biggest victims” of the outbreak.

“We gave the full list of our followers to the government,” said Kim, “but the list was leaked and some people were forced to take leave from their work, discriminated against, insulted, and even pressured to quit their jobs.”

Kim said Shincheonji has informed its 245,000 followers nationwide, including 9,000 listed with the Daegu church, to refrain from outdoor activities and halted all church-related activities, including services and missionary work, from last Tuesday. Some 1,000 churches and offices related to Shincheonji have been closed and disinfected, Kim continued.