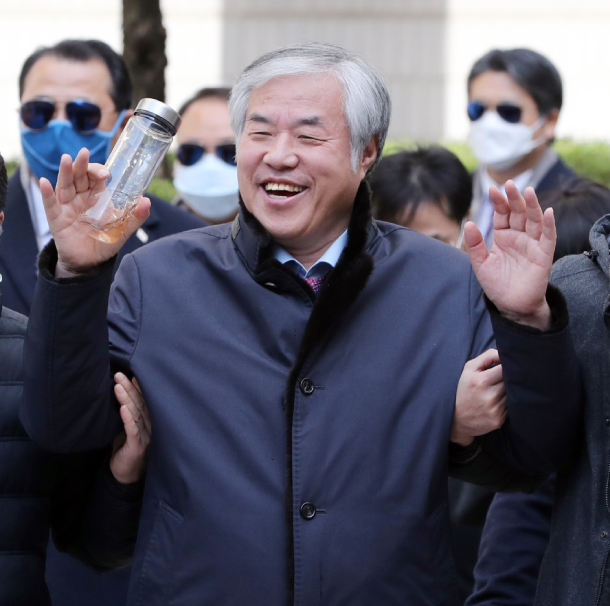 Controversial pastor Jun Kwang-hoon, an organizer of the anti-Moon Jae-in protests, said Monday he will host a massive street demonstration on March 1, despite the Seoul city government’s ban on rallies to stop the spread of the coronavirus.

Reverend Jun, the leader of the Christian Council of Korea and a coalition of conservative groups demanding the resignation of President Moon, said he is undeterred by the Seoul Metropolitan Government’s warning. “I will hold the March 1 rally, no matter what happens,” he said after attending an arrest warrant hearing at the Seoul Central District Court. He is currently being investigated on several charges including election law violation.

The Seoul Metropolitan Election Commission and a Protestant civic group have asked the police to investigate Jun for allegedly asking participants of street rallies to vote for a particular political party. On Thursday, the police, through the prosecution, applied for a warrant to arrest Jun on charges of violating the Public Official Election Act. The hearing was initially scheduled for Friday, but delayed to Monday at Jun’s request.

After a two-hour warrant hearing, Jun was sent to the Jongno Police Prescient to wait for the decision. About 30 followers gathered outside the police station to express their support. The court is to announce its decision as early as Monday evening.

It was his second time attending a warrant hearing. The prosecution last month asked the Seoul Central District Court to issue an arrest warrant against Jun for organizing a violent rally. The request, however, was struck down for lacking grounds.

Before entering the police station, Jun told the press that he will go ahead and hold massive rallies near Gwanghwamun Square this coming weekend. The anniversary of the March 1 Independence Movement falls on Sunday.

“Doctors, who are the best experts, said no infections were reported at outdoor rallies,” Jun said. “If they want to ban rallies, they should stop indoor gatherings. There is no ground for our peaceful, outdoor assembly.”

Despite the Seoul Metropolitan Government’s request, Jun did not halt massive street rallies on Saturday and Sunday. According to the organizer, about 8,000, mostly elderly people, attended the rally on Sunday.

The Seoul Metropolitan Government asked the police on Monday to investigate Jun’s anti-Moon coalition on charges of violating the Infectious Disease Control and Prevention Act by holding the rallies over the weekend. The act allows the health minister, mayors and governors as well as county heads to ban a mass gathering to prevent the spread of infections. A violation, however, faces perhaps a slap-on-the-wrist punishment - a fine less than 3 million won ($2,500).

The Supreme Prosecutors’ Office has also launched a task force team to counter crimes associated with the outbreak. Prosecutor General Yoon Seok-youl issued an order that prosecutors must aggressively investigate those who spread false information about the outbreak.

The Sokcho branch of Chuncheon District Prosecutors’ Office indicted a 54-year-old man on charges of spreading false information about a hospital in Sokcho. Another man was also indicted earlier this month for spreading rumors that a hospital in North Gyeongsang will be shut down due to the outbreak.

“Ordinary people can unknowingly and easily be a part of the dissemination of fake news,” said lawyer Kim Gwang-sam. “In the past, they were just ordered to pay fines, but stronger punishment is now possible.”

The lawmakers are also working to revise a loophole in the Infectious Disease Control and Prevention Act. Anyone who refuses to cooperate, obstruct or avoid an epidemiological investigation of an infectious disease faces criminal punishment of up to two years in jail or a fine of up to 20 million won, but the law has no clause forcing a suspected patient to take a test. The Health and Welfare Committee last week passed a revision bill, and it is pending to be voted on.

The government also plans to punish those profiteering from face masks and hand sanitizer. The Ministry of Food and Drug Safety imposed emergency orders on Feb. 12 that mask producers and sellers report to the government about their production and sales details. Any violation of the new measures or market cornering and price gouging of face masks will be punished by up to two-years imprisonment or a fine of up to 50 million won.