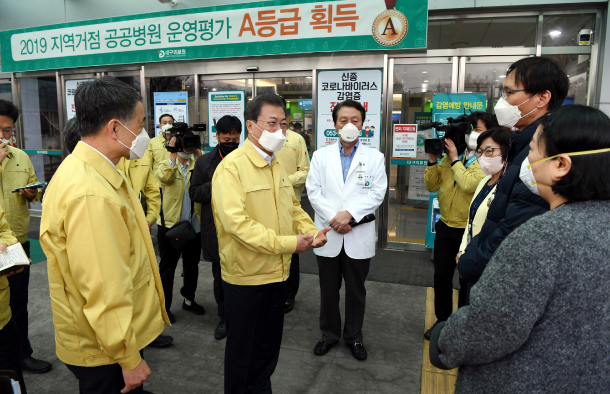 President Moon Jae-in spent four hours in Daegu on Tuesday, where an outbreak of the novel coronavirus is mostly concentrated, to calm residents’ growing panic and promise support from the government.

“The government will fight the battle against the virus by putting forward all national capabilities,” Moon said as he started the visit with a meeting with city officials. Daegu Mayor Kwon Young-jin, Daegu Metropolitan Council Chair Bae Ji-sook and Daegu Metropolitan Education Office Kang Eun-hee attended the meeting.

“The government mobilized the military and police troops and operated the national support system including medical manpower from the private sector. We must stop the spread of the virus within the region and outside,” Moon said.

Moon’s visit to Daegu took place amid snowballing fears in the city that the government will enforce a containment policy to isolate the area. Earlier in the morning, the ruling party fanned the panic. “Daegu and North Gyeongsang will be designated as special crisis management zones, and maximum barricade measures, beyond ordinary quarantine measures, will be enforced,” Rep. Hong Ihk-pyo, chief spokesman of the Democratic Party, said after a meeting between the party, government and Blue House officials. He also said the government was considering a plan to stop movements by exercising administrative power.

His remarks immediately sparked panic in Daegu as residents fear that the city will be shut down like Wuhan of Hubei Province, China, the epicenter of the deadly outbreak. The party, government and Blue House later clarified that Hong did not mean a “physical isolation” of the city.

During his meeting with Daegu officials, Moon reiterated that the government has no plan to enforce a blockade to quarantine Daegu. He also said Prime Minister Chung Sye-kyun will remain in the city to oversee the crisis management. “The key is time and speed,” Moon said. “Within this week, we must create an inflection point on the surge of infections.”

Moon also promised special assistance to lessen the socioeconomic damage in Daegu and North Gyeongsang. The government will get the legislature’s approval for a supplementary budget and aggressively help the region, Moon said, promising support plans stronger than merely designating the areas as special disaster zones.

Following the meeting, which lasted 70 minutes from 1:35 p.m., Moon visited Daegu Medical Center, where 115 infected patients are being treated in isolated wards. He received a briefing about the situation at the hospital and offered encouragement to the medical workers. Moon only stayed there for 13 minutes from 3:06 p.m. Dr. Yu Wan-sik, head of the center, asked for the government’s full support for medical manpower and supplies. Moon promised all possible support.

As the number of infections surged to 500, Daegu is suffering from a lack of isolated hospital wards. The city said Tuesday it has secured 783 wards including 224 in Daegu Medical Center and 240 in Keimyung University Daegu Dongsan Medical Hospital and is consulting with the central government to send patients to state-run hospitals in other regions.

According to the city, not all infected people are hospitalized in isolated wards. Among the 500 patients, 142 are currently at their homes under quarantine measures.

Moon also visited the Nam District Office of Daegu, checked on the welfare system and offered encouragement to the public servants. “Of the infections nationwide, a significant number are reported in Daegu,” said a Blue House official. “Among those in Daegu, most are in Nam District. The president is visiting there because it is suffering a great hardship.”

Moon completed his trip with a meeting with small business owners of the city at Dongdaegu Station.

Meanwhile, leaders of the main opposition United Future Party tested negative for the new coronavirus, the party said Tuesday. Chairman Hwang Kyo-ahn and three representatives including floor leader Shim Jae-cheol took the tests on Monday. Shim and two lawmakers attended a seminar last week at the National Assembly with an infected person, and Hwang sat next to Shim at a party meeting on Monday. The National Assembly has been shut down for disinfection since Monday afternoon. It will reopen today.