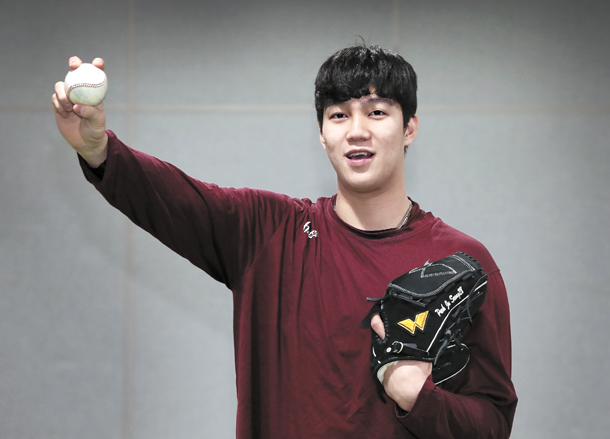 Kiwoom Heroes' pitcher An Woo-jin poses for a photo at Gocheok Sky Dome in western Seoul on Jan. 22. [PARK SANG-MOON]

This week’s interview is with the Kiwoom Heroes’ two young hopeful,pitcher An Woo-jin.

His 1.91 meters, over six feet, could lend An Woo-jin to a plethora of sports that require height, but he’s chosen baseball, specifically, pitching for the Kiwoom Heroes.

An’s height, which he puts down to “just genetics,” led him to try his hand at other sports before he finally settled on baseball.

Since his mother used to be a volleyball player, An first decided to follow in her footsteps, but he called it quits because of the pain he felt in his arm when he received the ball.

“I first started volleyball, but when I received, it hurt,” An said. “So I played baseball. Stepping on the base, throwing balls and catching baseballs was fun so that’s why I chose it.”

When An was younger, he enjoyed running around the bases more than pitching. Up until middle school, An used to bat and pitch, just like many other players, but once he got to high school, he set his sights on becoming a pitcher. He may seem shy and quiet off the field, but when it comes to baseball, the 20-year-old is just as serious as the veterans.

“When I first started baseball, I had a dream of [playing in the] major league,” An said. “My final goal is to get to the major league. As I got older, I started to realize the reality of getting to the majors, so I set my goal as to turn pro.”

Though he’s played two seasons in the KBO, An says he still gets nervous when he gets on the mound, but as he continues to pitch, his nerves slowly start to dissipate.

“I still have nerves but not the ones that will affect my game,” An said. “It’s the nerves that help me focus.”

An successfully achieved his first goal of turning pro, as he was drafted first by the Heroes in the 2018 KBO rookie draft. He had high expectations set on him thanks to his outstanding performance in high school, and shortly after he was drafted, there was already talk of him as a possible candidate for the Rookie of the Year.

But then he faced his first setback. Just a few months after he got drafted, An found himself at the center of some controversy with an old high school teammate and the club slapped him with a 50-game ban.

An’s ban came as another blow to the Heroes who were already off to a shaky season in 2018. As they were missing a number of starting players due to injuries and other scandals, An was immediately added back to the starting entry as soon as he completed his ban and made his KBO debut on May 25, during a game against the Lotte Giants, as a reliever.

“I was added [to the roster] that day,” An said. “I wasn’t sure if I was actually going to throw because I didn’t think I was ready, mentally. I was really nervous, and it was against Lotte so the atmosphere was already tense. But then the coach got a call to the bullpen. I was nervous at first, but as I started to warm up, all that disappeared.”

Going back and forth between the bullpen and as starting pitcher, An didn’t have the best rookie season, picking up two wins and four losses with a 7.19 ERA. But it was during the postseason that An really had a chance to shine. During the first round of the playoffs against the Hanwha Eagles, An picked up two wins as a reliever with a 0.00 ERA, and in the playoff against the SK Wyverns, he once again fulfilled his role with a 2.70 ERA.

With his outstanding performance, An began his sophomore season with the Heroes as a starter. Up until June, An had been on the mound as starter as he had a 5.15 ERA with six wins and five losses. Then, due to shoulder pain, he had to miss two months, and once he returned, An switched his position over to the bullpen.

Although his second season didn’t go as he had expected, he finished with a 5.20 ERA by picking up seven wins and five losses, and once again, An proved his worth in the postseason. In the first round of the playoffs, An helped the Heroes advance by giving up one run throughout three and one-third of an inning over two games with a 2.70 ERA.

Then, in the playoff round against the SK Wyverns, he had a clean 0.00 ERA throughout three games, while tossing one and two-thirds of an inning. Although he struggled in the Korean Series, where the Heroes lost the title to the Doosan Bears, his performance up until then was good enough to leave a lasting impression as the Heroes’ must-have pitcher.

“I think I get stronger mentally,” An said. “Even during the season, I consider each and every one of my pitches just as important, but since the postseason is such a big stage, the atmosphere changes, in terms of the number of fans and the cheering. From those factors I think although I’m not the best player on the team, I feel a responsibility.”

In Korea’s cheering cultures, the fans have songs for their batters. So pitchers not only have to face off against the opposing batters, but they also need to zone out from all the chanting and shouting of the fans. Although An can hear all those sounds, he said that doesn’t affect his performance.

“I can hear it very loudly,” An said. “Sometimes it feels like the ground is shaking. Even though I can hear them, I don’t care about it. It’s not that I don’t care, I can’t. Since I’m just focusing on the games, I think I don’t really get to care about that and just focus on my game.”

Throughout An’s first two seasons, he’s been switching between the starting rotation and the bullpen, but starting this season, their new manager Son Hyuk has hinted that he will be in the bullpen. Although An hopes to be a starter, he says he’s in no rush.

“I thought about it a lot, too,” An said. “There are great senior starting pitchers like Ryu Hyun-jin, Kim Kwang-hyun and Yang Hyeon-jong. I would love to become like them, but right now, I’m not there yet, in terms of tossing long innings against the batters. So our manager said it would be right to be in the bullpen for now. Statistically I was better in bullpen so I have confidence. But later, I want to become the best starter in Korea.”

For An, his most unforgettable game is still his debut.

In terms of a game he wants to forget, it was against the Hanwha Eagles in Daejeon on May 16, 2019. Until that game, An only had good memories of Daejeon, and even on the day of, when he was warming up, he felt great. But that one game turned out to be the one he wants to erase from his memory.

“I felt like I was good that day,” An said. “I had good speed. But there was nothing for me to throw. I tossed two and one-third of an inning, and I gave up nine runs. That day, there was just no way [to fix it]. There will always be days like that.”

But through that game, he learned a valuable lesson: “The better you feel, the more be careful you have to be.”

An was not completely satisfied with a single thing about his 2019 season so he is preparing for this season a little differently. Although it’s proven that he is a needed player in the Heroes’ rotation, An hasn’t left to Taiwan for spring training. Instead, he’s in Korea, training at his own pace.

“Since my back has been hurting since the postseason, my trainer suggested to take care of that and see if I can join later,” An said. “The trainer coach told me not to push myself [by going to spring training] and to just take my own routine, slowly.”

In terms of his goal for the 2020 season, it’s simple: “to not get injured and play through the season.”

However in the long term, An’s dream has never changed.

“I want to play well and play in other countries,” An said. “Just like Ryu Hyun-jin, I want to go to the United States and play well. But to do that, I need to play well.”