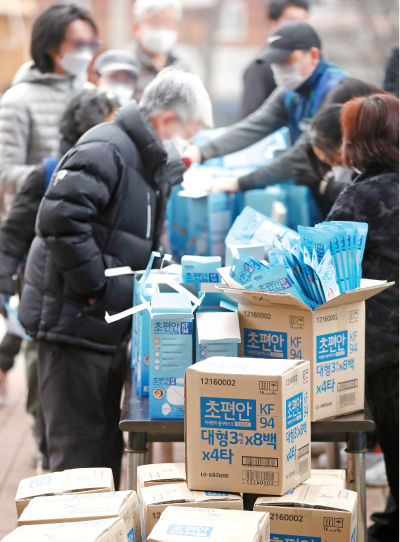 People buy face masks at a Hanaro Mart in Jongno District, central Seoul, on Sunday. NongHyup, operator of Hanaro Mart, supplied 5.5 million units of face masks to all 319 branches in Seoul and Gyeonggi on Sunday. [YONHAP]

Mask exports have dropped dramatically amid a nationwide buying spree as Koreans attempt to stay safe from the coronavirus outbreak.

The Korean government has been implementing a number of regulations on sales of masks outside of the country in order to secure sufficient quantities for people in Korea as the number of confirmed infections continues to grow.

The country surpassed 3,700 confirmed cases of the virus Sunday.

The authority on Feb. 26 banned mask manufacturers in Korea from exporting more than 10 percent of their daily production.

Manufacturers were also required to sell 50 percent of their products through the government’s official retail channels, such as the post office or Hanaro Mart starting from the same day.

Individual sellers are also banned from taking bundles of masks outside Korea. Previously, individuals were only required to file a declaration with customs if they exceeded 1,000 units or 2 million won ($1,700) worth of masks.

Under the current situation, however, those individual sellers must get approval from the Ministry of Food and Drug Safety beforehand to transport more than 300 units of face masks outside the country.

Despite these measures, however, many Koreans are still struggling to buy masks.

Under the government’s instructions, Korea Post started selling masks on Feb. 27 in the Daegu and Cheongdo County, North Gyeongsang, areas, where the lion’s share of coronavirus infections have occurred. Availability was expanded nationwide the following day.

Despite a limit of five units per person, the supply of masks remained far short of demand. According to Korea Post, 150,000 units of masks were sold out within 30 minutes in Cheongdo and Daegu on Feb. 27. The next day, 550,000 units were available for sale nationwide at post offices, yet many people who waited in line to buy the masks returned home empty-handed.

In response to rising complaints, the government has pulled in military forces to lend a hand in resolving the supply shortage.

The Ministry of National Defense on Sunday announced it would supply 72 military personnel and 12 trucks to help pack and deliver masks from six production facilities in Busan, Jeonju in North Jeolla, Paju in Gyeonggi and other locations.

As a temporary fix, Korea Post said it would start selling the masks three hours earlier than scheduled, beginning Sunday.

NongHyup Hanaro Mart, another official retailer for the government-provided masks, said Sunday it had begun selling 1.1 million units of masks in 319 locations in the Seoul and Gyeonggi areas.