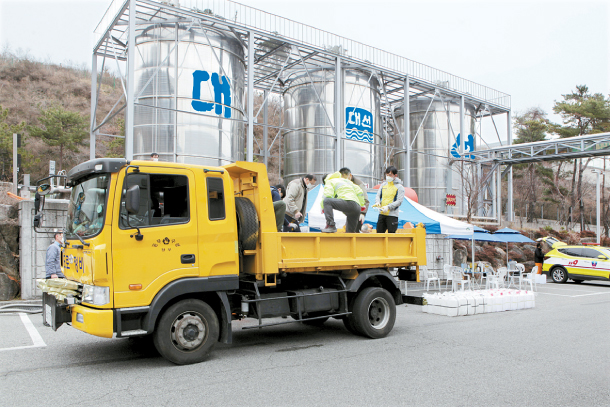 Daesun Distilling staff load soju base liquid on a truck to be sent to 16 regional offices at Busan. [DAESUN DISTILLING]

The economic fallout from the new coronavirus has found another victim in Korea’s producers of soju, an alcoholic beverage synonymous with drinking in the country.

Soju factories in Daejeon and Busan are either shutting down or pivoting to sanitizer production as demand falls steeply, with residents increasingly unwilling to leave their homes.

The Mackiss Company is a soju maker based in Daejeon, with its O2 Linn soju ranked a best seller in the city and across the Chungcheong provinces. It halted production of the soju line Feb. 27, the first time in the company’s 47-year history.

“February’s soju shipments tumbled around 40 percent compared to the same month last year,” said a company spokesman. “Soju demand plummeted, and we thought our staff should also be given a chance to do checkups for the coronavirus.”

The timing was unfortunate, following the company’s January release and heightened marketing of a brand new barley-based soju, Lin21. In late 2018, Mackiss had lowered the alcohol content of its main product O2 Linn in line with a changing trend that prefers lighter alcoholic beverages. Lin21 was supposed to attract consumers that miss the old days of strong soju. As its name implies, the alcohol content is 21 percent.

Daesun Distilling is a Busan-based soju maker with the highest market share in the city. Instead of halting its factories, it found another way to put the soju glut to use - donating 32 tons of its 95-percent ethanol solution to 16 district offices in Busan to produce sanitizing liquid.

This is the first time Daesun’s “soju base” has been used for anything other than the alcoholic beverage, Daesun CEO Cho Woo-hyun said. The company had to request permission from Busan’s tax authorities for the donation, as domestic law strictly forbids it to be used for other purposes. The approval came on Feb. 26.

“Despite having no precedent cases, Busan tax authorities gave us a fast approval for the plan, considering there was zero possibility of illegal distribution of the ingredient and the fact that it contributes to a national crisis,” Cho said.

Unlike soju, demand for sanitizing liquid soared after the new coronavirus outbreak, creating a scarcity of ethanol. Daesun plans to supply the ingredients to other regions as well until the situation stabilizes, the company said.

“We haven’t pulled the figures yet, but it’s true soju sales have greatly plunged due to the disease’s spread,” said a Daesun spokesman. “We decided to donate in the hopes it would help overcome the crisis as soon as possible.”

In the food segment, a product that’s seeing an excessive hike in demand is instant noodles, or ramyeon.

Along with water bottles, ramyeon is one of the top two products that fly off retailers’ shelves in a national crisis as people stockpile them at home.

To prevent further shortages, convenience stores implemented a cap on the number of ramyeon units their store owners can order at a time. CU did so last week for an extensive list of 10 best-selling ramyeon brands, while GS25 has limited orders of four Nongshim products.

The stockpiling in Daegu and North Gyeongsang of Nongshim products coincides with a major jump in popularity for Neoguri and Chapagetti noodles. Both products appeared in Director Bong Joon-ho’s film “Parasite,” which won four Oscars last month, as the ingredients for a dish called “ram-don” or chapaguri. Both brands are subject to order limits at CU and GS25.