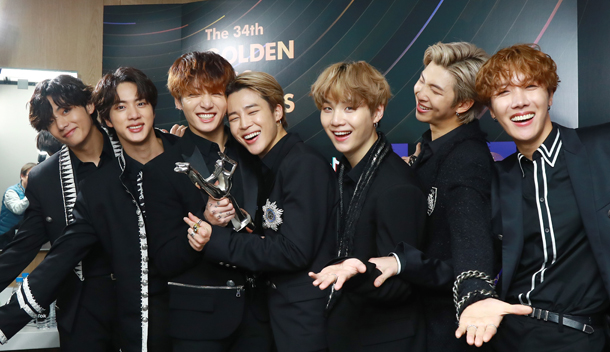 “Map of the Soul: 7,” the new album from K-pop super band BTS, landed atop the Billboard 200 chart this week giving the group a history-making fourth No. 1 on the American album list, Billboard said Monday (Korean time).

“‘Map of the Soul: 7’ storms in atop the chart with 422,000 equivalent album units earned in the U.S. in the week ending Feb. 27,” the music magazine said on its website, citing data from Nielsen Music/MRC Data.

This means that the 20-track album was streamed 74.79 million times in the first week of its release.

It was the biggest week for any release in the United States so far this year.

This latest chart victory marks the band’s fourth Billboard No. 1 in less than two years, a rare feat even for an American artist.

The band first topped the album chart in May 2018 with “Love Yourself: Tear” and its two following albums - “Love Yourself: Answer” and “Map of the Soul: Persona” - landed at the top spot in September 2018 and April 2019, respectively.

The only band to generate four No. 1s on the albums chart faster than BTS was the Beatles. Starting in 1966, it took the British band one year and five months to achieve the feat, while BTS took a little more than one year and nine months, according to Billboard.

“Map of the Soul: 7” is also the 10th non-English album to top the album tally, it said.

Since “Love Yourself: Tear,” BTS has continued to grow in first-week sales in the American music market.

The first-week sales grew even further with “Map of the Soul: Persona” to 230,000 equivalent album units before the latest album topped 422,000 units, according to Billboard.

Billboard has not yet disclosed how “On,” the lead track of “7,” performed on the Hot 100 singles chart dated March 7.