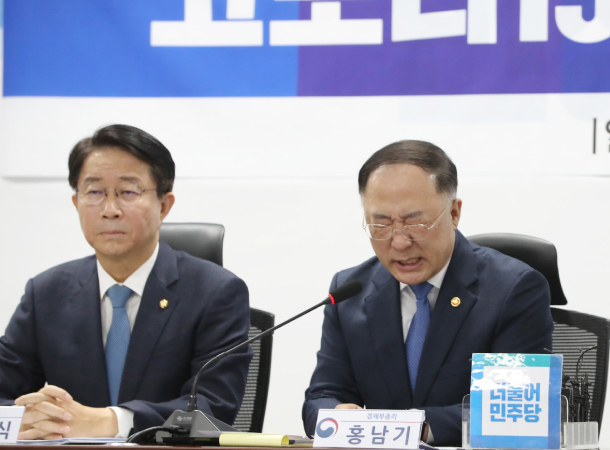 Finance Minister Hong Nam-ki, right, chokes up as he speaks during a meeting with the leaders of the ruling Democratic Party at the National Assembly on Monday. [YONHAP]

Finance Minister Hong Nam-ki choked up several times Monday as he asked the public to hold on a little longer as the country works to overcome the coronavirus epidemic.

Hong’s emotional remarks came during a meeting with the ruling Democratic Party’s leaders as they work to craft a supplementary budget - with an expected price tag of 11.6 trillion won ($9.74 billion) - to counter the outbreak’s impact. The leaders plan to have the budget ready for approval by the National Assembly by March 5.

“Without sanitation, there is no economy,” the Finance Minister said. “The best measure in overcoming the damages inflicted by the coronavirus and improving the economy is ending this coronavirus situation even a day sooner.”

Before saying that patients must overcome the illness before they can get back on their feet, he paused for few seconds before finding his composure to end the sentence.

He again became visibly emotional as he said that struggling small businesses need to hold on a little longer, his lips trembling as he spoke.

“The government will work harder in [trying to] understand the people’s minds, the damages [inflicted], complaints and requests more deeply,” he continued.

Hong was visibly shaken by the epidemic. By Monday evening, the government’s tally of confirmed coronavirus infections had passed 4,300, with a death toll of 26.

Hong said the government has worked night and day on the supplementary budget, which it expects to pass the cabinet meeting on Wednesday before being sent to the National Assembly for approval the next day. Monday’s meeting included former Prime Minister and Democratic Party general election candidate Lee Nak-yon, who is also leading the party’s coronavirus response team, as well as the Democratic Party’s floor leader Lee In-young.

“[The government,] without having to wait for the supplementary budget, has immediately used the 2 trillion won contingency reserve for disaster relief in supporting sanitization,” Hong said.

He added the government is also using every policy measure at its disposal to assist industries that have been affected by the virus outbreak, along with small businesses and those in the vulnerable classes.

Still, he said, the government’s need for National Assembly’s cooperation is “absolute and desperate.”

“As much as there has been an agreement between the President [Moon Jae-in] and the leaders of the four political parties on Friday, we have worked on the supplementary budget so that it could be confirmed during the special session of the National Assembly, which ends on March 17,” Hong said. “We have worked under a hyper-speed schedule.”

He said the government has worked to select projects that meet three principles - urgent, likely to be executed and temporary.

The size of the budget is expected to be similar to the 11.6 trillion won supplementary budget created when the country was heavily hit by the outbreak of Middle East Respiratory Syndrome (MERS) in 2015.

Within the new budget, at least half is expected to be spent primarily on containing the spread of the coronavirus. During the MERS outbreak, 6.2 trillion won was used on sanitization efforts.

If passed, it would be the current administration’s fourth supplementary budget, with one created every year since Moon took office in 2017.

Until early last month, Finance Minister Hong had repeatedly said the government’s contingency reserves would be sufficient to avoid a supplementary budget. Since then, however, the number of infections in Korea has soared along with doubts over the government’s 2.4-percent growth target this year.

Many international institutions have lowered their growth forecasts to below 2 percent, and the Bank of Korea shaved its growth projection last week from 2.3 percent to 2.1 percent.

The Organisation for Economic Cooperation and Development (OECD) was the latest to announce its revised projection, down to 2.0 percent from 2.3 percent.