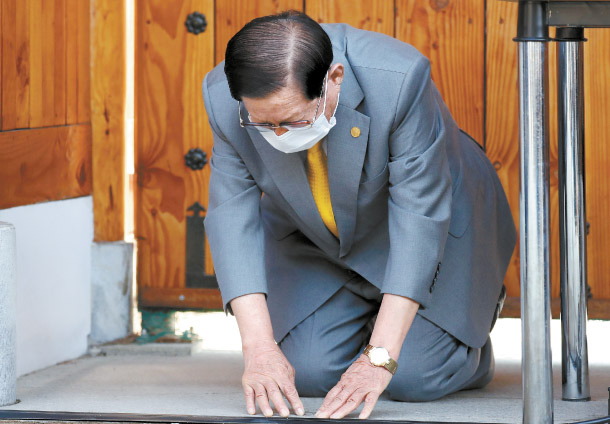 Lee Man-hee, founder of the Shincheonji Church of Jesus, bows at a press conference outside the group’s Palace of Peace in Gapyeong County, Gyeonggi, on Monday. [JOINT PRESS CORPS]

Lee Man-hee, founder of the Shincheonji Church of Jesus, issued an apology Monday as his secretive sect is investigated for manslaughter for refusing to cooperate to stop the deadly coronavirus outbreak.

“Regarding the mass infections linked to Patient No. 31, I, as the leader of Shincheonji, offer a sincere apology to the people,” said Lee, 88, in a press conference. “We had no intention [to allow it], but many were infected. We did our best, but we could not completely stop [the spread of the disease]. I apologize to the people.”

After Patient No. 31, a 61-year-old woman and a Shincheonji follower in Daegu, was diagnosed last month, health officials said she may have helped spread the disease. As of Monday morning, 3,260 infections were reported in Daegu and nearby North Gyeongsang.

In his first public appearance since the church emerged as a nexus in the outbreak, Lee, who founded the controversial doomsday sect in 1984, said Shincheonji is “actively cooperating” with the government and all gatherings of the followers have been stopped. “We will do our best to offer all human and material resources to the government,” he said.

After reiterating apologies and begging for forgiveness from the government, Lee dropped to his knees and touched his head to the ground twice. “Now is not the time to investigate who is at fault,” he said, “and heaven will help us.” He also asked the public not to “misjudge” his followers.

Shincheonji Church of Jesus, the Temple of the Tabernacle of the Testimony, to use its full, formal name, has 12 branches nationwide and more in other countries, including China. Followers regard Lee as a physically immortal messiah figure.

The press conference took place outside the group’s Palace of Peace in Gapyeong County, Gyeonggi, as the province banned any indoor event to prevent infections. Dozens of journalists attended, and protesters also rushed to hold demonstrations. More than 200 police were dispatched to control the area, and health authorities dispatched disinfection vehicles.

After reading a statement, Lee took questions from journalists. A follower sat next to Lee to help him because his hearing is impaired, and it was evident he was having problems answering questions.

The moderator of the press conference intervened and clarified that Lee was tested at a hospital and was negative. The assistant started feeding answers to him when he became incoherent, and church officials rushed to end the press conference. Lee insisted on continuing, but the officials ended the session and took questions instead.

The Shincheonji officials insisted that they cooperated with authorities investigating the outbreak and gave a list of the sect’s followers but admitted there were some discrepancies between the names on the list and actual members because some churches were abruptly shut down.

“We offered a list of 212,324 members on Feb. 25,” an internal affairs official of the church said. “Because it did not include members overseas, it triggered a misunderstanding.”

He said the church sent a list of all members to the Korea Centers for Disease Control and Prevention on Feb. 27 - 50,476 in Korea and 10,951 overseas. He also denied reports that the church erased a computer server that contained records of the members.

Earlier in the day, the Seoul Central District Prosecutors’ Office said it assigned criminal investigation team II to open a case into the sect. Around 8 p.m. on Sunday, the Seoul Metropolitan Government filed a criminal complaint with the prosecution accusing Lee and leaders of the Shincheonji church’s 12 branches nationwide of gross negligence manslaughter and violations of the Infectious Disease Control and Prevention Act by hampering public authorities’ efforts to fight the outbreak.

The city said more than half of the people infected with the coronavirus in Korea are linked to Shincheonji. “Lee and the leaders should have taken tests voluntarily, and the followers should have cooperated with the authorities’ clinical and epidemiological investigations to stop the outbreak, but no such measures were taken,” the complaint says.

The city accused the sect of actually obstructing the authorities’ operations by submitting faulty lists of followers to the central and regional governments. The Seoul Central District Prosecutors’ Office said Monday that criminal investigation team I will look into a complaint filed by the United Future Party (UFP) against Lee. Last week, the party urged prosecutors to investigate Lee on defamation charges by falsely claiming that he had named the UFP’s predecessor, the Saenuri Party. “The party’s honor is disgraced by Lee’s lie,” it said.

In Korean, “Saenuri” literally means new world, and Shincheonji translates as “new heaven and new earth.” Former Shincheonji followers recently told the media that Lee, after the conservative party changed its name in 2012, claimed to have given the name to the party.

At the press conference on Monday, Lee wore a golden watch bearing the Blue House emblem and signature of former President Park Geun-hye. Park was the acting chairwoman of the Saenuri Party in 2012 when the conservative party changed its name. Former aides in the Park Blue House said the watch was fake because no golden watch was produced during her presidency.