2019 wasn’t good for Koreans in terms of pocketbooks, wealth

2019 wasn’t good for Koreans in terms of pocketbooks, wealth

Koreans got poorer last year, according to the central bank Tuesday.

Gross national income (GNI) per capita in Korea dropped by 4.1 percent on year in 2019, the sharpest drop since the global financial meltdown in 2009, when the index fell by 10.4 percent, Bank of Korea (BOK) data showed. 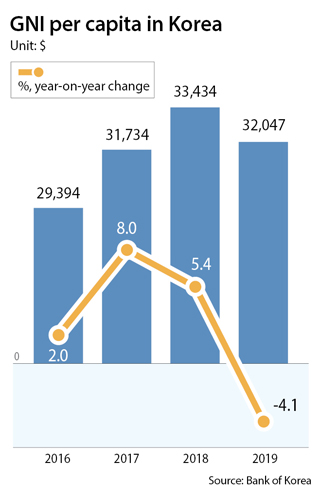 It was the first decline since 2015, when Korea was hurt economically by an outbreak of Middle East respiratory syndrome. For the past three years, GNI per capital continuously rose, peaking at $33,434 in 2018.

The BOK blamed an unfavorable global trade environment and trade conflict between the United States and China for the gloomy stats. Low prices for semiconductors, Korea’s main export item, also took a toll.

The on-year growth rate for 2019’s real GDP, which factors out inflation from the nominal GDP, was 2 percent, also the lowest since the 2009 financial meltdown, when growth was 0.8 percent on year.

In 2019, investment in equipment and construction in Korea fell by 7.7 percent and 3.1 percent, respectively, compared to the previous year.

Government spending, however, rose by 6.5 percent on year during the same period.

“With the profitability of companies worsening, they lacked the capacity to make investment. The government tried to make up for it with fiscal policy, but there were limits,” the BOK official explained.

Looking ahead, the figures could get worse.

The coronavirus crisis is already hurting the economy, especially the service sector. The BOK warned of negative growth in GDP in the first quarter of this year.

It trimmed its outlook for 2020 GDP growth from 2.3 percent, which was made in November, to 2.1 percent last month.

The Organisation for Economic Cooperation and Development also slashed Korea’s growth outlook from 2.3 percent to 2.0 percent on Monday.