‘Kingdom’ returns for another bloody battle: The palace continues to fight off zombies in Netflix’s global hit

‘Kingdom’ returns for another bloody battle: The palace continues to fight off zombies in Netflix’s global hit 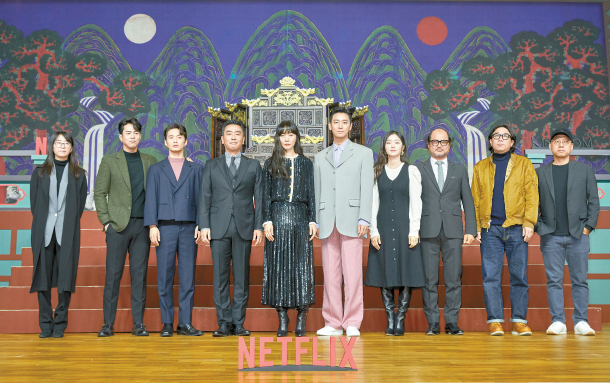 Friday the 13th may usually be considered a bad omen for the superstitious, but fans of the hit Netflix show “Kingdom” are counting down the days until Friday, March 13, when the second season will be made available worldwide.

The story of a zombie apocalypse happening during the Joseon Dynasty (1392-1910) and the power struggles between the royal family in the face of a epidemic made the show Netflix Korea’s first original series to become an international hit.

The series was included on a top 10 list of the Best International TV shows in 2019 selected by The New York Times, and fans of the show all around the world have become increasingly excited as the trailer for the second season was released and posters promoting the series went up on Sunset Boulevard in Los Angeles, on the Westin Michigan Avenue in Chicago and Times Square in New York City.

“I think [the global audience] are curious and excited about the series because we tried to create something that was our own, that derives from the heart of Korean culture,” writer Kim Eun-hee said during a press conference held on Thursday. 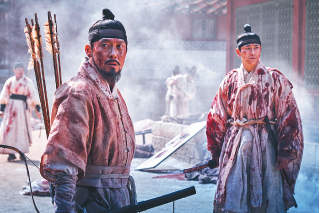 A scene from the second season of “Kingdom,” in which a new character, army Gen. Min Chi-rok (played by Park Byung-eun) and the prince, Lee Chang (played by Ju Ji-hoon), stand in the palace, covered in blood. [NETFLIX]

“Working overseas as an individual and appearing in foreign films is of course an achievement, but there are really no words to describe the indescribable joy I feel to be loved and recognized through a local film for Koreans. I’ve never been so proud of ‘Kingdom’ as I am now,” actor Bae Doo-na said.

What avid fans of the show will be most eager to find out is whether or not all the “bait” that was thrown in the first season - all the detailed hints and mysteries that remain unsolved - will be resolved in the next season.

“Not only will they all be resolved, but Kim also leaves new bait for viewers to chew on at the end of the season,” actor Ryu Seung-ryong said.

“As I read the scripts for each episode, at the end of each episode I would exclaim, ‘Really? Is this how it happens? Through this character?’” Bae said, complimenting the writer’s meticulous yet tight plot. “There are new twists and surprises around every corner, every episode. We even didn’t expect the story to be thrown off this way.”

The end of first season leaves the main characters - the Crown Prince Lee Chang (played by Ju Ji-hoon) and his forces - waiting in fear as hundreds of zombies emerge from a thick fog, running at full speed towards their line of defense.

All the actors and creators agreed that the second season is where the story “really begins to spread out.”

The actors also dropped hints about how their characters change in the second season.

“Lee Chang transitions from a target to a pursuer,” Ju said. “It all comes down to his role and responsibility as the crown prince who grows into his position as a true king for his people and his kingdom.”

“Seo-bi continues to be a physician on the front lines working to save as many people as she can,” Bae said. “But as Seo-bi joins forces with the prince she becomes smarter, I think. If in the former season she spent most of her time trying to get her bearings, now she’s calmer and more focused on trying to find a solution.”

“I tried to retain the tension from the first season,” Ryu said. “The viewers will be able to witness how Cho Hak-ju’s greed for power reaches its climax. Even though there aren’t any big actions for Cho, I wanted to show how a human desire can be even scarier than a plague.”

Actor Kim Hye-jun, who plays the young ambitious queen, is still vicious in seeking to quench her thirst for power.

“She became a queen at such a young age, and yet she is still power-hungry, obsessed with taking control of the kingdom through ‘her’ baby,” Kim said. “In this season, she may be plotting her own schemes that even her father [Cho Hak-ju] can’t imagine.”

Director Park In-je, who directed most of the second season, was extra careful not to say anything in fear of spoiling the show.

“The story spins off like a roller coaster ride,” Park said. “But basically, the story is about how the prince dives deeper into finding out what the plague exactly is, how he will accept it and what his responsibilities are as a king and lastly, how the kingdom is ruined.”

The creators and actors hinted quite strongly that the second season will not be the show’s last. As the “Kingdom” universe continues to expand, writer Kim Eun-hee said that if she can, she would love to extend the series into 10 seasons.

“But next season will only be possible if the second one does well,” Kim said.

“If the first season’s theme was about hunger - the commoner’s hunger due to poverty that led to the spread of the plague versus the hunger for power in palace politics - the second season is after blood. Not just regarding the plague, but about heritage and bloodlines as well. Viewers will see the sharp comparison between how the zombies’ cravings for blood and power-driven humans’ desire to continue their bloodline co-exist.”

“No matter what viewers have imagined, it’s going to be more,” Ryu promised the awaiting fans. “If BTS rocked the music industry and ‘Parasite’ wowed the film market, ‘Kingdom’ will once again impress the global audiences through streaming platforms.”

The second season will be released on the platform at 5 p.m. on March 13.