Recoveries from virus more than double

Recoveries from virus more than double

Illegal workers queue up at the immigration service center in Terminal 1 of Incheon International Airport on Thursday to report their voluntary departures. Many illegal workers are leaving Korea over fear of Covid-19, or coronavirus, infection. [NEWS1]

The number of people who recovered from the coronavirus more than doubled to reach 88, local health officials said Thursday, the largest number of such patients reported in a single day. 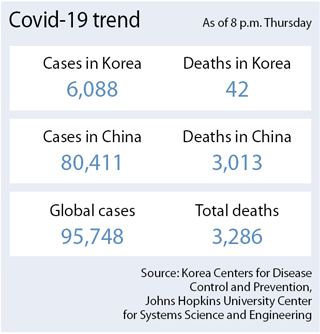 The Korea Centers for Disease Control and Prevention (KCDC) announced that 88 patients had been cleared by Wednesday midnight, up 47 from the day before amid signs of a slowdown in the nation’s coronavirus outbreak.

By 4 p.m. Thursday, 6,088 infections were counted by the KCDC, up 467 from 4 p.m. Wednesday. The number of new cases was slightly higher than that reported Wednesday, 435.

Yet both figures are still lower than on previous days when government officials extensively tracked down followers of the Shincheonji religion, whose church building in Daegu has been the epicenter of the outbreak.

Based on statistics from the KCDC released at 4 p.m. daily, there were 813 new cases from last Friday to Saturday; 586 from Saturday to Sunday; 599 from Sunday to Monday; and 851 from Monday to Tuesday.

Patient No. 31, a middle-aged Korean woman, was the first known case linked to Shincheonji’s church in Daegu, and most of Korea’s infections have been traced to the same church building since, either in churchgoers or people who contacted them.

The latest infections were again mostly from the southeastern city of Daegu, Korea’s fourth-largest city with a population of about 2.5 million, and surrounding North Gyeongsang.


The death toll stood at 42 by Thursday at 8 p.m., nine more than the KCDC’s total count by Wednesday at 8 p.m.

The latest deaths were mostly senior citizens with underlying illnesses such as high blood pressure or diabetes and lived in Daegu or North Gyeongsang.

In explaining the surge in recoveries, local health officials implied the phenomenon was natural and not surprising because many patients exhibited light symptoms that didn’t require special treatments.

In Daegu, where 4,327 coronavirus patients have been counted so far, officials say around 80 percent seem to fall in that light-symptom category.

Daily counts of new recoveries were mostly five or less before Wednesday, ever since Patient No. 2 was first pronounced fully cured on Feb. 2.

“When we look at [coronavirus] cases from foreign countries,” said Vice Health Minister Kim Gang-lip Thursday in a press briefing, “we can see that it usually takes about two to eight weeks to treat the virus, so we can expect to see more patients” in Korea recovering soon.

Kim said new infections in Daegu were also expected to drop, as Daegu officials complete their examinations of over 10,000 Shincheonji adherents and so-called trainees.

On a national scale, Kim said Korea was still “sporadically” seeing more patients here and there but that no serious community infection such as the one in the Shincheonji church community has appeared.

The vice health minister added that from now on, local health officials would shift their focus from tracking down and testing Shincheonji adherents across the nation to examining non-Shincheonji sporadic cases in order to block further transmissions.

KCDC Director Jung Eun-kyeong said Wednesday she expects to see a continuous rise in the number of patients getting fully well because more than two weeks have passed since Patient No. 31 was diagnosed.

Jung said the number of daily new recoveries would likely “pace up” as the peaks of daily new infections in Korea once had.

In Seoul, 105 patients were counted by 10 a.m. on Thursday, up by six patients from the previous day.

A 49-year-old woman in Bogwang-dong, Yongsan District, central Seoul, was the first Yongsan resident to have been diagnosed with the coronavirus after contacting a previously diagnosed patient.

Health officials said they were tracing all the people she was in contact with.

Jung District, central Seoul, is the only district among 25 in Seoul that hasn’t seen a coronavirus patient yet. Jung District is considered downtown Seoul.

Health authorities said Thursday afternoon that some 26 patients were in critical condition.

In part of efforts to subdue the crisis, the Korean government announced Thursday that Gyeongsan, North Gyeongsang, was added to its list of so-called special care zones for infectious diseases, the third area to be designated after Daegu and Cheongdo County, North Gyeongsang.

Daegu and Cheongdo were named special care zones last Saturday. The status usually comes with more medical resources and staff assistance. Cheongdo is home to Daenam Hospital, where at least 119 cases have been traced, making it the second-largest group infection locus after Shincheonji.

Nearly half of North Gyeongsang’s Shincheonji adherents live in Gyeongsan, which is why the city saw such high cases of diagnoses, officials said.

Fears of yet another group infection rose in Bonghwa County, North Gyeongsang, Thursday when 34 people in a nursing home for the elderly tested positive for the coronavirus after two patients were diagnosed Wednesday morning, bringing the total toll there to 36.

All 112 doctors, nurses and patients at the establishment are being tested.