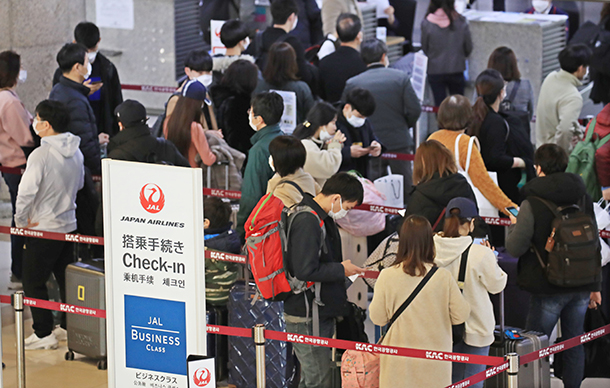 People await check-in for flights to Japan at Gimpo International Airport on Sunday, hours before Korea was set to suspend its visa-waiver program for Japanese citizens starting Monday. [YONHAP]

All Japanese citizens will need visas to enter Korea starting today, announced the Korean Ministry of Foreign Affairs Friday in response to Tokyo’s slapping of quarantines on visitors from Korea over fears of the new coronavirus.

Seoul is suspending its visa-waiver entry program that allows Japanese visitors to stay in Korea up to 90 days, and starting today will invalidate visas that have already been issued.

On Sunday, Korea’s Ministry of Justice said all Japanese citizens will be required to obtain new visas to enter Korea starting from 12:00 a.m. Sunday night, including those with diplomatic passports.

Cho said Japan’s latest travel measures stemmed from a “lack of understanding” of Korea’s “advanced” quarantine system, while pointing to a “considerable lack of transparency” in Japan’s own handling of the coronavirus outbreak and a low rate of testing for the disease.

The Justice Ministry added it would strengthen rules for visa issuances at Korean consulates in Japan. All Japanese citizens seeking visas to enter Korea will now be required to submit a form on their health status and whether they have recently experienced symptoms associated with the coronavirus, like a high temperature, body chills or headaches.

“All our consulates in Japan will conduct sufficient reviews of visa applications before granting entry permits,” read the ministry’s statement. “Based on future developments, we may also require applicants to submit health certificates from medical centers.”

Independent of the visa measures, Korea’s Ministry of the Interior and Safety and Ministry of Health and Welfare will deny entry to all foreigners coming from Japan deemed to be health risks.

The Japanese government has been criticized by health experts for its handling of the Diamond Princess cruise ship off Yokohama last month that resulted in some 700 infected passengers.

Japan’s latest measures were close to a banning of Korean visitors.

There are 103 countries with some form of entry ban or bolstered quarantine measures on travelers from Korea as of Friday.

“We have the best diagnostic capabilities by far compared to any other country,” said Kang. “Currently, we are able to test 18,000 cases per day. That means one case every 4.8 seconds. We have also introduced drive-through testing stations.”

Korea’s measures affecting Japanese visitors represent yet another escalation of an ongoing diplomatic spat between the neighboring countries.

Last year, Japan imposed restrictions on the export to Korea of a number of strategic industrial materials as a result of a Korean Supreme Court decision ordering Japanese companies to compensate Korean forced labor victims.