Travel between the two neighboring countries is all but cut off.

Following the implementation of the new restrictions, a Jeju Air plane with a capacity of 190 passengers landed at Narita airport, near Tokyo, from Seoul around 8:00 a.m. in the morning. There were only eight passengers.

Among them were two Korean nationals who were residents of Japan. The remaining passengers were foreign nationals or Japanese citizens.

Japanese authorities are requesting people coming from Korea and China to undergo self-quarantine in their homes or other accommodations in Japan such as hotels. They are expected to declare to officials where they will stay during the two-week period and will be asked to check their health daily and report if they develop symptoms of the virus. 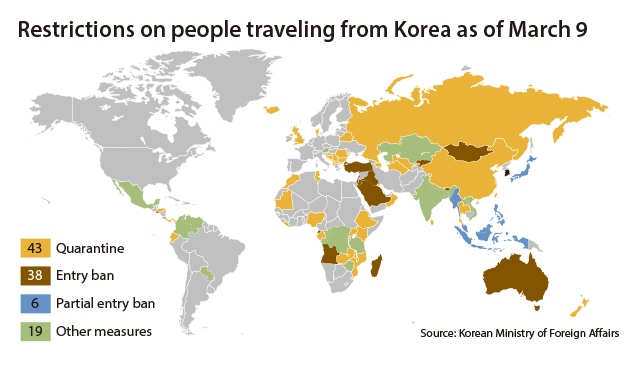 Japanese Prime Minister Shinzo Abe announced the new travel restrictions on Thursday evening including the 14-day quarantines and the suspension of the visa-waiver program for Koreans, including the invalidation of visas that were already issued. The measures are expected to be in place through the end of this month.

The Japanese quarantines are not legally binding, according to Japanese authorities. Thus, it is unclear how well-enforced they will be, and they will essentially be voluntary.

Entry procedures for the Jeju Air flight from Korea to Narita took around 45 minutes, according to passengers, who were asked to provide contact information and undergo health checks.

A 25-year-old U.S. citizen working for a fashion company told the JoongAng Ilbo, “I live in Tokyo and fly back and forth from Seoul and Tokyo for work. I plan to work from home for two weeks.”

He added that while he provided his home address and phone number to authorities at the airport, there was no mention of whether Japanese officials will check on him everyday or make sure he is keeping the quarantine.

“I don’t think they will be checking up on me,” he said. “They said not to use public transportation, but how will they keep track of that? It seems that Japanese officials are unclear of what to do.”

The situation was similar at Kansai International Airport in Osaka Monday morning, usually bustling with Korean tourists. Another Jeju Air flight from Seoul arrived at around 8:30 a.m. carrying three passengers. Only one passenger was a Korean citizen.

A senior Ministry of Foreign Affairs official said that teams from Korea’s Embassy in Tokyo and Consulate in Osaka have been dispatched to the two airports to monitor the situation and offer support. There was no particular difficulty for the Korean passengers to enter Japan, the official said.

Japan already had a travel ban on Daegu, which was expanded Saturday to include other areas of North Gyeongsang.

Korea on Monday also raised its travel advisory for Japan one notch to Level 2, or the “yellow” alert in a four-tier system, calling on people to refrain from visiting the country. The highest Level 4 calls for an evacuation from the country. Korea already has a Level 3 advisory for Fukushima, the site of the 2011 nuclear meltdown, which advises an evacuation.

Seoul’s Foreign Ministry said that the change in the travel alert reflects “many questions in the international community over the lack of transparency within Japan on the infection situation.”

The mutual travel restrictions are expected to have an impact on students ahead of the start of a new school year and businesspeople, as well as tourists.

Some 17,000 visas for Koreans were invalidated, according to the Japanese Foreign Ministry.

Korean airlines have canceled most routes to Japan.

In response, some Koreans boycotted Japanese products and stopped traveling to the country.

Seoul’s Ministry of Trade, Industry and Energy said Korea and Japan are scheduled to hold their first trade meeting since December on Tuesday through a video conference, rather than in person in Seoul as originally planned.

Prime Minister Abe has faced criticism domestically for his administration’s response to the virus.

Japanese authorities were criticized by health experts following the failed quarantine of the Diamond Princess cruise ship, docked off the coast of Yokohama, last month. Some 3,700 passengers and crewmen were quarantined on the ship for over two weeks, resulting in over 700 patients and seven deaths. There are over 1,100 reported cases in Japan, including those from the cruise ship and 14 deaths. But experts point out that there has been a low number of tests conducted.

Japan has been scrambling to contain the coronavirus amid talks of a possible delay in the Tokyo Summer Olympics, scheduled to kick off in July. A visit by Chinese President Xi Jinping to Japan in April was postponed.

Travelers from China and Korea account for about half of all inbound tourists to Japan, so the restrictions are expected to have repercussions on Japan’s economy.

As of Monday afternoon, a total of 106 countries have implemented entry bans or strengthened quarantine procedures for travelers from Korea over the coronavirus.

The number of countries increased by three countries since Friday, and now 38 countries or territories have entry bans on people who have been in Korea, the latest addition including Oman, according to Seoul’s Foreign Ministry. Six others have implemented entry bans on people coming from Daegu and nearby areas in North Gyeongsang.

The coronavirus that originated in Wuhan, China, has spread globally, bringing total cases to over 110,000 and causing more than 3,800 deaths.

Korea pledged to provide $3 million to the World Health Organization (WHO) to help global efforts to fight the coronavirus, the Foreign Ministry said in a statement Monday.

Korean Foreign Minister Kang Kyung-wha held a phone call with Tedros Adhanom Ghebreyesus, the director-general of the WHO, late Sunday and briefed him on Seoul’s efforts to contain the disease in a “transparent and active” manner.