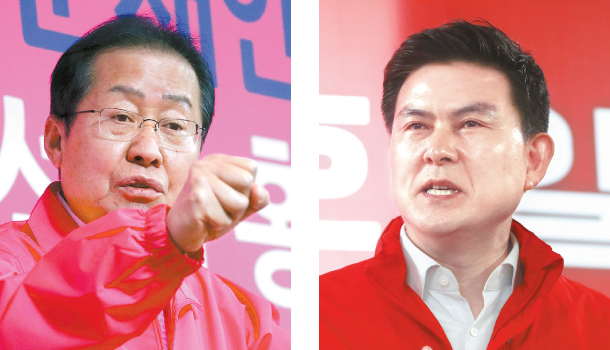 Conservative political heavyweights are challenging the United Future Party (UFP)’s decision to disqualify them, after the party announced over half of its candidates in a bid to speed up the nomination process ahead of the April 15 general elections.

The party’s nomination committee, led by former National Assembly Speaker Kim Hyung-o, named candidates for 140 out of 253 constituencies as of Sunday, while scheduling primaries in 73 districts to finalize contenders. Among those who failed to pass the screening process was Hong Joon-pyo, one of the UFP’s celebrity politicians.

“I sacrificed my 25 years of political life in this party,” Hong said Monday in a press conference held at his campaign office in Yangsan, South Gyeongsang. “I chaired this party twice, and I was also its presidential candidate to save this party. But it decided to throw me away after 40 days of humiliation. This is inhumane.”

Hong, 65, is a former prosecutor who served as a four-term lawmaker and was elected twice as South Gyeongsang governor. He was the presidential candidate of the Liberty Korea Party, the predecessor of the UFP, in the 2017 election, but was defeated by Moon Jae-in.

Hong argued that the decision to oust him was influenced by Kim’s personal feelings toward him. “The decision should be invalidated,” he said.

Over the past weeks, Hong and the committee were at logger heads as it demanded he run in a tough district in the capital region. Hong, who initially wanted to run in his hometown of Changnyeong, South Gyeongsang, changed his district to Yangsan B of the same province, but the committee disqualified him on Thursday.

“I went to the interview despite insults and humiliation given by Kim,” Hong said. “I also stood up against maligning forces inside the party. But I was patient for the sake of the unity and reconciliation of the party.”

Hong said he won’t immediately leave the party to run as an independent, pressuring UFP Chairman Hang Kyo-ahn to reverse the nomination decision. “The time is ticking, so I need an answer soon,” he said, adding that he will wait until the end of this week.

The UFP’s nomination committee also disqualified Kim on Thursday as he insisted on running in a district in South Gyeongsang. The committee has asked him to run in a capital region, but Kim also said he wanted to run in his hometown. He said he will run as an independent, win and then go back to the party.

Fates were also split for the loyalists of former President Park Geun-hye, impeached and removed from office in March 2017, and their adversaries. While the public have been critical of the Park loyalists, her diehard supporters have condemned politicians who voted for her impeachment in 2016.

As of Monday, only Chung, a four-term lawmaker, was nominated to seek reelection in his district of Gongju-Buyeo-Cheongyang. Chung was the floor leader of the Saenuri Party, a predecessor of the UFP, when the impeachment was passed in December 2016.

Reps. Kim Moo-sung, Kim Sung-tae and Yoo Seong-min have declared that they won’t run in the upcoming general election.

Reps. Lee and Ha will have to go through primaries. The nomination committee is undecided on the fate of Rep. Kweon, who was the chairman of the Legislation and Judiciary Committee of the National Assembly at the time of the impeachment. During the Constitutional Court’s impeachment trial, he also represented the legislature against Park and her lawyers.

Ten politicians are known as Park loyalists and their fates are also split. Reps. Jeong Kab-yoon, Won Yoo-chul and Yoo Ki-june said they won’t seek reelection. Reps. Yoon Sang-hyun and Kim Jae-won, key members of the Park loyalist faction, were disqualified but will seek reelection in their constituencies.

Yoon has decided to run as an independent, while Kim said he will run in a primary in Seoul’s Jungnang B District.

Reps. Lee Jung-hyun and Cho Won-jin left the party in 2017 and Reps. Suh Chung-won and Hong Moon-jong in 2018 in the aftermath of the impeachment. They have proposed alliances to the UFP, but no arrangement has been made.

Last week, Park made public a handwritten letter from prison, urging the conservatives to unite with the UFP at the center. Yoo Yeong-ha, Park’s lawyer, revealed the message on behalf of the former president, who has been imprisoned since 2017, as she undergoes a trial on abuse of power and corruption charges.

Meanwhile, the Future Korea Party (FKP), a satellite political party of the UFP for proportional representation, said it received over 500 applications ahead of a 5 p.m. deadline on Monday.

The FKP said its goal is winning 20 proportional representation seats.