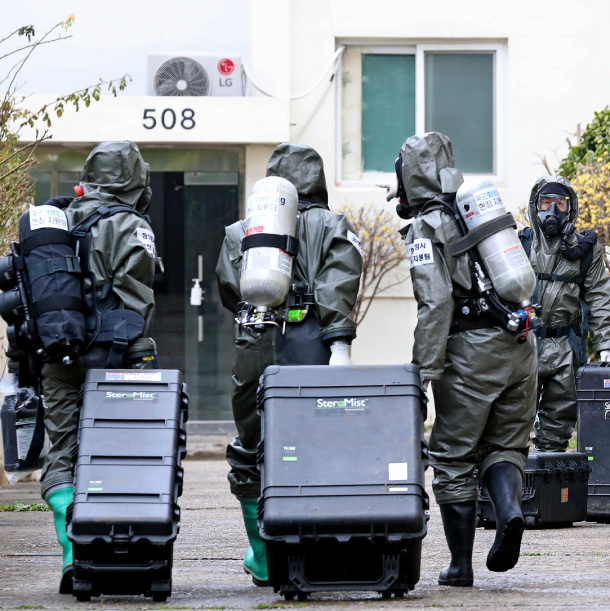 Military quarantine officials conduct a disinfection operation on Monday at the Hanmaeum Apartment complex in Daegu, where 46 people, all Shincheonji worshippers, tested positive for the novel coronavirus. [YONHAP] 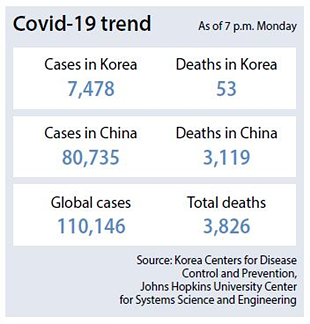 New coronavirus infections dropped to their lowest number in two weeks on Monday, with 165 new patients confirmed, a sign that the pace of contagion continues to slow.

Monday’s number was more than 100 fewer patients than on Sunday, when 272 new cases were reported. From Friday to Saturday, 448 new infections were reported.

The total number of virus cases in Korea stands at 7,478 by 4 p.m. Monday, according to the Korea Centers for Disease Control and Prevention (KCDC). According to KCDC statistics from noon on Monday, around 90 percent of all confirmed cases were found in Daegu or North Gyeongsang.

Two more fatalities were reported: a 75-year-old man and a 69-year-old woman, both in Daegu. That brought the virus’s death toll in Korea to 53.

Yet the number of new infections in Daegu - the epicenter of the outbreak in Korea - dipped below 200 for the first time in weeks, as the government wrapped up its tests on nearly all known adherents of the Shincheonji Church of Jesus in the area.

President Moon Jae-in in an meeting at the Blue House highlighted the positive news, saying the country’s infection “trend is consistently on the decline” but added it was too early to be optimistic.

“In various regions, including Daegu and North Gyeongsang, there have been sporadic cases of small cluster infections,” Moon said. “Continuing small-scale cluster contaminations means the danger of larger group infections can occur, so we cannot relax.”

Health officials on Monday also noted that a significant majority of Korea’s coronavirus infections - 79.4 percent - were collective occurrences, in which those affected were contaminated in clusters as opposed to on an individual basis.

Out of all cluster-related infections - numbering 5,881 as of Monday morning - 62.5 percent of were linked to Shincheonji, a controversial Christian sect.

Daegu Mayor Kwon Young-jin told reporters Monday that 97.6 percent of all 10,471 Shincheonji worshippers in the city had been tested and that results were available for 9,651 of them. Of these, 42.9 percent, or 4,137 people, were confirmed positive for the virus. A remaining 50 people have refused testing so far, but Kwon said city authorities would file a police complaint if they do not comply.

On Saturday, the Hanmaeum Apartment complex in the city was placed under a so-called cohort isolation - the quarantine of an entire building - after 46 residents, all Shincheonji adherents, were confirmed to have contracted the disease.

But Shincheonji devotees are already believed to have spread the disease to regions beyond Daegu and surrounding North Gyeongsang.

In Gyeonggi, which as of Monday 8 p.m. had a total of 152 cases, Seoul National University Bundang Hospital in Seongnam locked down one of its departments after a worker tested positive. In a Facebook post, Seongnam Mayor Eun Su-mi revealed the employee in question - a 35-year-old woman - is a Shincheonji member.

Around 10 co-workers who had close contact with the employee at the hospital were placed in quarantine.

Local authorities all over Korea have focused their epidemic response on identifying Shincheonji worshippers in their respective regions. Incheon’s metropolitan government announced Monday it had shut down a total of 90 Shincheonji-related facilities, while Seoul’s government is in the process of revoking the church’s corporate license on the basis that the organization has endangered public safety by allegedly concealing its membership records. As with the official responses surrounding Shincheonji, the highly contagious nature of the virus has propelled the government to undertake measures that some deem controversial.

In Seoul, a 78-year-old woman from Daegu hospitalized at Inje University Seoul Paik Hospital was diagnosed with the virus on Sunday and became the subject of public criticism and official scrutiny after it was revealed she had lied about her place of residence.

The patient was hospitalized on March 3 complaining of stomach pains and vomiting, after denying multiple times to hospital representatives she had visited Daegu recently. On Sunday, she tested positive for the virus.

The woman later said that she lied about living in Mapo District, western Seoul, where her daughter lives, because a number of other medical facilities she visited earlier in Seoul had refused to treat her when she revealed her place of residence.

Both the hospital and the government said they were considering filing lawsuits against the patient for violating the country’s infectious disease control act, which mandates patients reveal necessary personal information to medical professionals.

Police Commissioner General Min Gap-ryong on Monday said that a total of 20 people in Korea are under investigation for violating disease control laws and that if the patient at Paik Hospital was confirmed to have committed an illegal action, she would be “swiftly and seriously” subject to legal action.