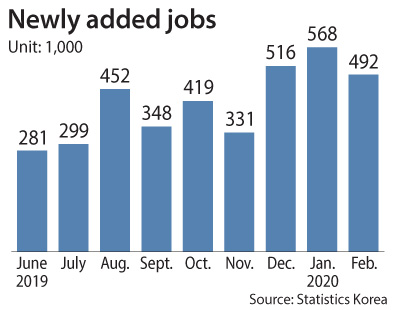 The coronavirus crisis has already made its impact on jobs in Korea.

On the positive side, the transportation and storage industry hired 99,000 new employees in February compared to a year earlier, up 7 percent. Statistics Korea credited a sharp increase in home delivery services as people refrained from venturing out to avoid getting sick.

But in the wholesale and retail industries, new jobs shrunk 106,000, down 2.9 percent year-on-year, as people shunned trips to shopping malls and stores like Lotte Mart and Emart, according to Statistics Korea on Wednesday.

The latest survey was conducted between Feb. 9 and Feb. 15, a few days before coronavirus cases started to soar.

“Since the February job study was conducted before the number of confirmed cases started to go into full swing, the impact [on February’s] job study was limited,” said Eun Sun-hyun, director of social statistics at Statistics Korea. “As March’s study starts next week, we are expecting to see a more accurate impact [from the novel virus] on each industry.”

The lodging and restaurant sector last month continued to see new jobs increase, adding 14,000 new jobs last month, up 0.6 percent year-on-year. But that number is much smaller than the 86,000 jobs added in January.

The statistics agency speculated that a decline in tourists hurt the lodging and restaurant businesses.

For the whole economy, 492,000 new jobs were added last month compared to a year earlier. Although this was a slight drop from the 500,000 jobs that were added in each of the last two months, it was the seventh consecutive month in which more than 300,000 jobs were added.

New jobs continued to be added in manufacturing, 34,000 last month, up 0.8 percent compared to the previous year. This was a sharp increase than in the previous month, when 8,000 jobs were added, up 0.2 percent year-on-year.

The manufacturing sector, which accounts for 16.6 percent of all jobs in the country, added jobs for the first time in almost two years in January.

The biggest number of new jobs was created in the health and welfare service industry, which includes government-funded jobs for the elderly. Last month, 202,000 new jobs were created, up 9.7 percent compared to a year ago.

On Facebook Wednesday, Finance Minister Hong Nam-ki said the increase in jobs and the lowering of the unemployment rate were welcome news

“[The latest report] on one hand shows the desperate need for more aggressive policies against the risks of a slowing economy,” Hong said.

However Hong said he was worried about March’s job report.

“It’s likely that the downward risks on jobs will expand in March,” Hong said. “Several areas especially centering on the service industries are showing signs of being impacted by Covid-19.”

Statistics Korea said it expects the full impact of the outbreak to be felt in March.

These are people who although are employed have taken leave within six months including those that are on unpaid leave. These people, however, are still included in the total number of people employed.