U.S. decided not to ban travelers from Korea

U.S. decided not to ban travelers from Korea 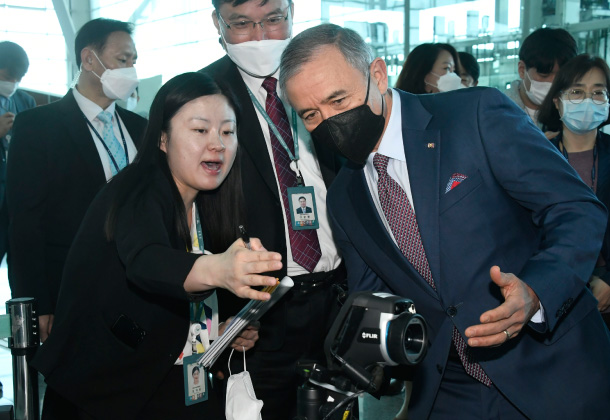 The Donald Trump administration discussed barring travelers from Korea and Italy as the coronavirus outbreak spread in those countries but ultimately decided against it, according to a U.S. media report.

Senior Trump administration officials discussed shutting down travel but decided not to because the virus was spreading too quickly to be contained, U.S. news website Axios reported Tuesday, citing sources with direct knowledge of the discussions.

Italy, Iran and Korea are among countries with the highest number of confirmed coronavirus cases outside of China. There are over 119,000 cases and 4,200 deaths globally in over 100 countries as of Wednesday.

At the end of last month, the U.S. State Department banned foreign visitors who had been in Iran in the previous two weeks from entering the United States. It implemented a similar ban on visitors from China earlier.

However, the United States stopped short of implementing similar entry bans on foreign travelers from Korea and Italy, taking into consideration their advanced health care systems. Both countries have tested high numbers of patients after confirming cluster outbreaks.

It called for Korean and Italian airports to implement a screening process for passengers heading to the United States but did not impose further restrictions on inbound travelers from those two countries.

The State Department also raised its travel advisory to Level 4, the highest in its four-tier system, urging Americans not to travel to Daegu, the epicenter of the coronavirus outbreak in Korea.

Sources told Axios that the U.S. State Department and Pentagon were especially concerned about cutting off travel from the two countries because the strong U.S. military presence in Korea and Italy’s central location in the European Union would complicate restrictions.

One source said that once the virus begins spreading across the United States there are “diminishing returns” on travel bans.

U.S. Vice President Mike Pence’s chief of staff Marc Short told Axios that he wouldn’t “comment specifically on conversations” inside the White House Situation Room but that “many viewpoints are represented everyday.”

Pence heads the White House task force for the coronavirus.

U.S. President Donald Trump told reporters in Washington Tuesday amid concerns over the economic downturn because of the coronavirus, “This was something that came out of China, and it hit us and many other countries… And it hit the world.”

He said Washington is “prepared” for the virus and “it will go away,” while stressing, “We want to protect our shipping industry, our cruise industry … our airline industry.”

However, U.S. health experts have expressed concern at the continuing shortage of coronavirus test kits despite assurances by the White House that a million tests have been distributed.

Last week, U.S. Centers for Disease Control and Prevention (CDC) officials visited the Korea Centers for Disease Control and Prevention (KCDC) to observe Korea’s system of containing the coronavirus, which has been characterized by a high level of diagnostic capability and transparency and swiftness in the sharing of information.

“U.S. authorities are well aware of the efforts being made by Korea,” said a senior Korean Ministry of Foreign Affairs official Wednesday. “They have remarked that they are impressed by Korea’s data on the coronavirus, and some officials said that the numbers being provided by Korea are the most trustworthy.”

The official said, “When speaking with U.S. State Department and health authorities, they have consistently regarded highly Korea’s transparency and abilities in containing Covid-19.”

He added that U.S. CDC officials after visiting the KCDC said that the data gathered by Korea in the past three weeks has been “exemplar and useful” and that “while the Korean system cannot be exactly applied to all of the United States, it could be useful for the United States when setting up their countermeasures.”

Starting Wednesday, the Korean government took over the health screening process for passengers heading to the United States that has been previously handled by airlines, dispatching military doctors to two airports. Travelers with temperatures over 37.5 degrees Celsius (99.5 degrees Fahrenheit) can expect not to be able to board flights. The number of new coronavirus cases in Korea has slowed, totaling over 7,700 patients as of Wednesday. However, there has been a major dwindling of travelers in and out of the country.

The Bahamas imposed an entry ban on foreigners who visited Korea in the past 20 days.

The Korean Foreign Ministry on Wednesday raised its travel alert to Level 1, the lowest in a four-tier system, for all regions of Italy, advising caution when visiting the country. It already has a Level 2 alert for five provinces in northern and central Italy that advises people to refrain from visiting those areas.

Seoul also implemented stricter quarantine screenings for people entering from Italy and Iran starting Wednesday, requiring travelers from the countries to answer a health questionnaire and be checked for a fever. Similar measures have been in place for people arriving from China, Hong Kong and Macau since last month.

Friction between Seoul and Tokyo increased over travel restrictions. The Blue House Tuesday shot down Japanese Chief Cabinet Secretary Yoshihide Suga’s claim that Tokyo had given Seoul prior notice about its new travel restrictions on Korea.