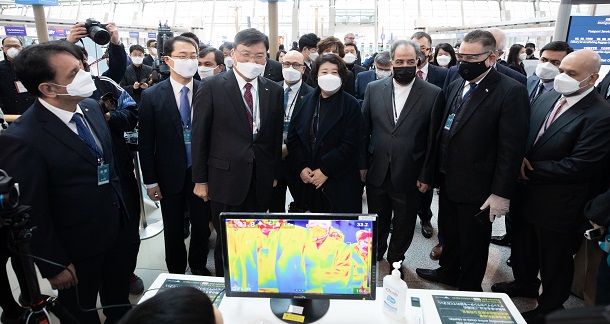 Diplomatic corps in Korea listen to explanations about health check procedures for incoming and outgoing flight passengers at Terminal 1 of Incheon International Airport on Friday. [NEWS1]

While new coronavirus cases in Seoul continued to increase Friday, the speed of transmission slowed from earlier in the week, easing fears over a possible mass transmission in the metropolis.

In Seoul, where a group transmission at a call center had spawned concerns, 13 more cases were reported, raising the total to 225 as of Thursday midnight, according to the KCDC data.

The increase marks a sharp slowdown from Wednesday, when 52 new cases were reported in the capital following a group infection among call center employees working in the southwestern neighborhood of Sindorim. It is also smaller than the 19 new cases reported Thursday.

Seoul Mayor Park Won-soon told reporters that most of the 1,091 workers, residents and their contacts in the affected building have been tested.

Of those who have been screened, 109 have tested positive, including 74 in Seoul, 17 in Incheon, west of Seoul, and 18 in Gyeonggi, according to Park.

Most of the patients were those who worked on the 11th floor of the building and their family members, while no cases have been reported among residents who live on the top seven floors so far.

"We seem to have extinguished the big fire, but we cannot lower our guard [...] There is a possibility that [the call center infection] may emit sparks to other areas," Park said in a press briefing streamed on YouTube.

Authorities have been on alert for group transmission in the wider metropolitan area, including Incheon and Gyeonggi, where around 25 million people live.

Some 80 percent of all cases in South Korea currently trace to group transmissions, with a majority of them tracking to the fringe religious sect Shincheonji.