TURNING 20
We’ve all had our coming-of-age moments growing up, unless you’ve managed to travel through time (in which case we’d love to interview you).

The Korea JoongAng Daily is turning 20 this year. We’ve had our own coming-of-age moments, but rather than boring you with stories about us, we decided to bring you stories of people, animals and organizations “Turning 20.” 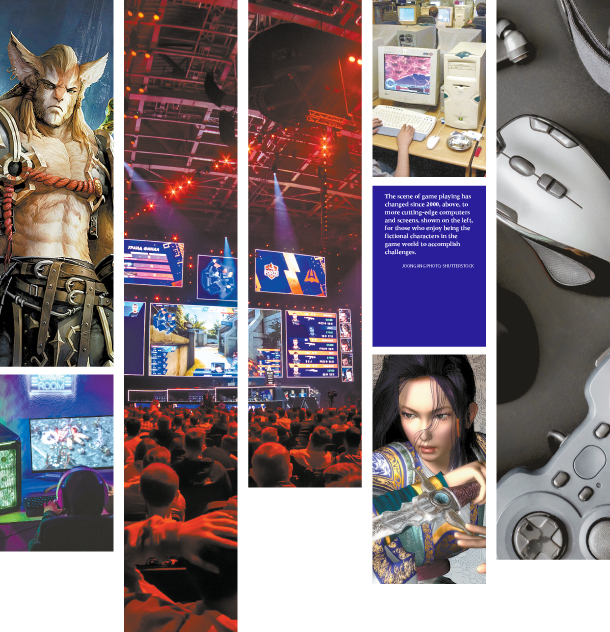 A whole new world is created with a quick slide of a mouse to the left and to the right, and even more changes appear depending on what you click with your index finger. Online games, which first started to emerge about two decades ago, have become a whole new world unto themselves, with the emergence of professional e-sports and proliferation of regulations to keep youngsters from playing too many games.

Korea first started seeing venture companies developing computer games in the early 1990s. As the computer became a part of people’s daily lives at the start of the new millennium, more people jumped in to the local gaming industry and helped build a robust new sector in Korea by not only making games but also creating places to play them comfortably as well as an infrastructure, such as a fast internet connection.

The year 2000 was a huge moment for the gaming industry and even saw the establishment of the first television channel dedicated to broadcasting game-related news as well as previews and reviews of new games.

OnGameNet (OGN) aired top gamers playing popular games on television to huge home audiences. The company changed its name to OGN in 2015 and became more focused on big -name games like Starcraft or League of Legends.

Gameshot, a popular online portal site for gamers, also started in 2000 and catered to those who needed the latest updates on the industry.

The rise in game-focused media also paralleled the jump in the number of game companies in the country. Gamevil, established in 2000, introduced one of the better known creative mobile game series titled Nom in 2003, and it went on to win many awards from state-run and private entities. The game’s fifth edition was released in 2011.

WeMade followed suit to create games for local and international gamers with the series The Legend of Mir as well as Lost Saga and Icarus.

Besides more companies popping up, major international companies launched new games that grabbed the attention of local fans. Diablo 2 from Blizzard Entertainment was released worldwide in 2000, keeping fans glued to their computers for hours and sometimes even days.

Over the years, the industry has evolved rapidly - while PC-based games were popular in the late 1990s all the way through the early 2000s, the market grew even larger thanks to the shift to mobile games as smartphones become part of people’s everyday lives.

According to a white paper about Korea’s game industry until 2018 published in January, the local game industry grossed over 14 trillion won ($11.6 billion) in 2018, up 8.7 percent from the year before.

The export amount has also increased by 8.2 percent on-year to reach $6.4 billion, which is over 7 trillion won.

Back in 2000, the local gaming industry’s market size was around 3 trillion won. In 2017, the industry had grown by almost five times, with more sales coming from mobile games than PC games for the first time.

Korea’s game market took 6.3 percent of the global game industry in 2018, making it the fourth largest in the world, after the United States, China and Japan. But in terms of PC-based games, Korea is in second place, behind only China.

To highlight the local market to fans and international buyers, the Korea Association of Game Industry, often referred to as K-Games, has hosted the G-Star trade show every year since 2005. The convention not only features game companies but also different start-ups that work to grow traffic or provide promotional tools to the gaming industry.

One of the key elements that led to the growth of the local gaming industry in Korea is the prevalence of PC rooms, where people gather to use computers with faster internet connections, the latest software and tricked out computers. Instead of getting together to play sports on a field, students often get together to play games in PC rooms, sitting side by side. And it’s not uncommon for young office workers to visit a PC room after work to play some games and let off some steam. Some nicer PC rooms offer a variety of foods other than the classic instant noodles, giving them no reason to leave.

While PC rooms are not as abundant now as they were in the 2000s and don’t make as much money as they once did, it still is a great place to understand gaming trends not only for local companies but also for international businesses as well.

Overseas game companies find the concept of having gamers all in once space interesting and see it as an opportunity to spread the word on the emerging e-sports world. Getting the attention of gamers in PC rooms means they will have an easier time distributing their games in the local market.

Local companies also see PC rooms as opportunities to grow, and some indirectly invest in PC room operation companies so that they can not only manage their frequent players but also establish sturdy distribution channels.

Some PC room franchises continue to diversify their business portfolios as well, looking to introduce unmanned PC rooms in regions outside of Seoul, according to local media reports.

With more people trying to grow the game industry, the social sentiment about game playing has also slowly changed over the past two decades. Parents no longer just scold their kids for playing too many games, and instead, in some cases, try to help them become professional gamers.

Meanwhile, industry experts also spend time researching ways to build healthy game-related behavior, as many people voice their concerns about game addiction. Korea’s Health and Welfare Ministry, working alongside the Cultural Ministry, have recruited entities that will execute special studies to see whether game addiction can be considered as a disease. The release of the study results is scheduled for October.

The goal is to have a follow-up measure for the revision of the classification of gaming addiction as a disorder by the World Health Organization last year, which it defines as “a pattern of gaming behavior characterized by impaired control over gaming.” The classification is supposed to go into effect on Jan. 1, 2022. Some worry that naming gaming disorder a disease might put a scarlet letter on playing games altogether and eventually discourage the industry from expanding.

Although Korea has earned its name in the game industry with is PC- and mobile-based games, especially in Asia, it is still working on diversifying its profile. Game companies of all sizes including Nexon, NCSoft and Next Stage, are working on developing new console-based games to expand Korea’s share in the global market.

NCSoft is expected to participate in E3, the global game expo in the United States in June for the first time in seven years, according to local media reports, and introduce new console games there.

Console games took up about 27.5 percent of the global market in 2018, and were more widely enjoyed by users in North America and Europe. Korean game companies see the console game market as another engine to grow its presence across the world.

More immediate changes are expected as well. Researcher Oh Dong-hwan of Samsung Securities forecasts that game companies that offer web-based board games may see an increase in sales now due to the spread of coronavirus, which has been keeping people at home and looking for ways to kill time. He explained that such games are easy to start even for novices, and the longer they play, the more sales can be made for the company.

“Due to the coronavirus outbreak which has kept people from engaging in outdoor activities, greater play times for games can contribute to better sales,” said An Jae-min, a researcher at NH Investment & Securities.

For instance, the government has put a limit on the amount of money one can invest when it comes to online board games including card games like poker. Even adults aren’t allowed to play games for 24 hours after they lose more than 100,000 won on one game. They can only use up to 500,000 won a day to play games and these have been applied since 2014.

With the expected modifications, researcher An forecasts that the local market for web board games will grow more than 20 percent this year.