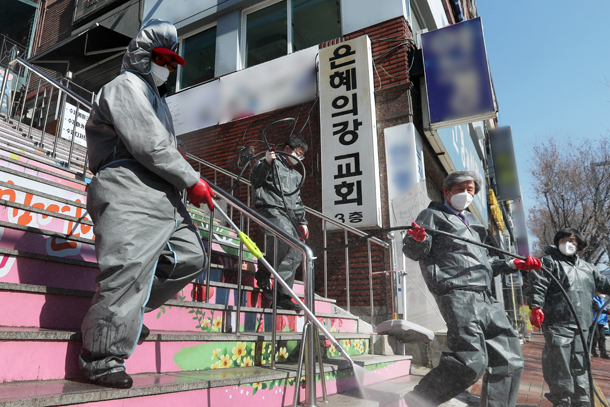 Quarantine officials on Monday disinfect the area around the River of Grace Community Church in Seongnam, Gyeonggi, where another virus cluster was found. [NEWS1]

At least 46 infections of the new coronavirus have been traced to a small Protestant church in Seongnam, Gyeonggi, just south of Seoul, health officials announced Monday, making it the second-largest cluster in Korea’s capital area.

Seongnam officials said Monday morning that 40 members of the so-called River of Grace Community Church tested positive for the coronavirus, on top of six people connected to the church who tested positive from March 9 to Sunday.

That brings total infections linked to the church to 46, though officials anticipate the figure will rise as tests on the churchgoers are still ongoing.

The second-largest cluster surfaced as daily new cases of the coronavirus, officially known as Covid-19, have been dropping in Korea. 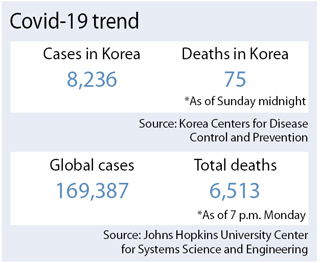 As of Sunday midnight, 75 people were reported dead from the coronavirus, the same figure than the previous day, while 1,137 patients fully recovered, 303 more than the day before. The KCDC said Monday afternoon that 59 people were in critical condition.

The largest cluster in Korea’s capital area - which includes Seoul, the surrounding province of Gyeonggi and the neighboring city of Incheon - was traced to an insurance call center in western Seoul.

At least 124 people contracted the disease so far, including employees of the call center in Sindorim-dong, Guro District, and people they had close contact with, such as their relatives.

Health officials said Monday they don’t know how the virus penetrated either cluster. As of Sunday midnight, Seoul had 253 coronavirus patients, Incheon 30 and Gyeonggi 231. Altogether, Seoul, Incheon and Gyeonggi accounted for 6.23 percent of infections nationwide.

The first member of the Seongnam church to test positive was a 33-year-old man in Jungwon District, Seongnam, on March 9. In the following days, a female churchgoer, her husband, another female churchgoer, a pastor of the church and his wife tested positive.

Sensing a growing cluster, Seongnam officials decided to run a virus test on all 135 members of the church who attended services on March 1 and March 8 and on Monday announced that 40 people tested positive. Some 20 adherents of the church were said to be unreachable Monday.

After seeing its first patient on March 9, the church had said it would close till the upcoming Sunday. Health officials believe the mass transmissions occurred on March 8.

With growing cases of infections among people arriving in Korea from Europe, where the coronavirus outbreak is now rapidly spreading, Vice Health Minister Kim Gang-lip announced Monday that the Korean government has expanded its special entry procedures to arrivals from all European countries starting Sunday midnight, including transit flights.

The process used to be applied to only nine countries and territories: China, Hong Kong, Macau, Japan, Iran, Italy, France, Germany, Spain, Britain and the Netherlands.

Those who are subject to the special entry procedures must fill out a questionnaire asking about possible symptoms related to the coronavirus and have their temperatures measured. Those who wish to remain in Korea must inform customs authorities of where they will stay as well as their phone number. They must also download an app, through which they are required to inform health authorities about their daily condition.

In Busan, a 24-year-old Korean male who recently traveled around Europe, including Italy, which now has the second-highest number of infections after China, tested positive for the coronavirus on March 10 upon his return to Korea, Busan officials said.

The man left for Europe on Feb. 9, returned to Korea on March 4 and started showing symptoms from March 9. Nevertheless, he dined at a restaurant, went to a coffee shop and rode the Busan subway until he finally tested positive on March 10.

A 44-year-old Korean woman in Gwangju likewise traveled to Europe for two weeks earlier this month and came down with a cough last Wednesday. She arrived in Korea last Thursday but was able to pass through customs at Incheon International Airport because her temperature was within the normal range, said Gwangju officials. She took an airport limousine from Incheon to Gwangju, which was a four-hour ride, and mostly stayed home till she tested positive for the virus last Saturday.

In Seoul, a French female national who arrived in Korea on March 9 started showing symptoms of a cough last Wednesday and turned out positive on Friday. Her male Korean friend was also tested and turned out positive Saturday. Seoul officials believe the French national contracted the disease from her father in France, who informed his daughter last Thursday that he was infected.