Post-pandemic, work may never be the same

Post-pandemic, work may never be the same 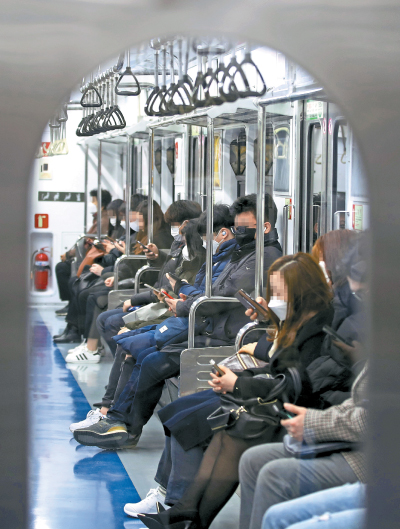 Passengers ride subway line No. 1. The number of commuters using public transportation has visibly shrunk since the coronavirus outbreak as many companies opt to have employees work from home. [YONHAP]

The coronavirus outbreak is upending the way people work in Korea, as companies’ “social distancing” policies are spurring increased flexibility in working hours and arrangements and as government measures to keep the economy afloat target workers laid off from struggling businesses.

Some of the changes may outlive the pandemic, particularly where working arrangements and employee compensation are concerned.

Seventy percent of the 454 companies that responded to a recent survey conducted by job search website Saramin said they felt the need to implement flexible working schedules to their office. However, only two out of 10 companies allowed flexible work schedules such as telecommuting, flextime and customized working hours.

Most answered that they still follow the conventional nine-to-six work schedule. Opposition from labor unions and lawmakers, meanwhile, has made it even harder for companies to experiment with flexible working hours.

Shinhan Bank ordered its entire call center staff to work remotely on Monday, a first for the local financial industry. Normally, working from home is considered a non-starter for employees at banking call centers, as they deal frequently with sensitive customer information.

The Financial Supervisory Service (FSS) has consistently forbid telecommuting for those workers, despite efforts like those of Shinhan Bank, which invested heavily to develop a digital solution that can protect its customers’ sensitive information.

“We thought telecommuting would be impossible [for our call center staff],” said Lee Yoo-cheol, a Shinhan Bank spokesperson. “Since the FSS is in close cooperation with us, in terms of customer privacy issues, we were able to send all our workers home.”

For its part, the government has recently pledged numerous measures to support struggling companies and their workers, including subsidies for infrastructure to allow small- and medium-sized companies to introduce telecommuting into their workplaces. Each company can qualify for up to 20 million won ($16,000) in government support through the program.

It could also trigger a change in how companies compensate their workers, given the inherent difficulties in tracking the number of hours worked by remote workers. Experts believe that this will lay the groundwork for companies to break away from the step-based system, shifting instead to a performance-based system. The government also made clear early this year that it intends to shift its labor policies to restructure the wage system.

The coronavirus has also motivated the government to find measures to help employees retrenched by the weakening economy.

Labor Minister Lee Jae-gap said Monday the ministry will allow all job seekers to apply for a monthly subsidy and job counseling programs. The program was originally available only for those who earn less than the median income. The education support allowance that can be used over the course of five years was also increased from 3 million won to 5 million won.

“Such measures are in line with the government’s unemployment compensation policy that provides 500,000 won [per month] for six months to those in the low-income bracket,” said Kwon Soon-won, a business professor at Sookmyung Women’s University.

While the program secured a 277 billion won budget, the bill took into effect later than expected as it failed to pass the National Assembly multiple times despite a consensus among labor unions, corporate officials and lawmakers to pass it.

“We need to restructure our unemployment support to prevent people from falling through the cracks in the law,” said Lim Seo-jeong, vice minister of the Ministry of Employment and Labor.

The Labor Ministry said it will also increase mental health counseling for occupational trauma, services that have previously faced opposition from lawmakers and corporate officials. Korea has in the past provided temporary counseling services, namely in 2009 to laid-off employees of SsangYong Motor who locked down their factories and staged a protest for 77 days.

“The most basic government support is helping job seekers regain their mental stability. While the measures came late, the fact that it is there is a huge change,” said Ryu Kyoung-joon, a professor at Korea University of Technology and Education.