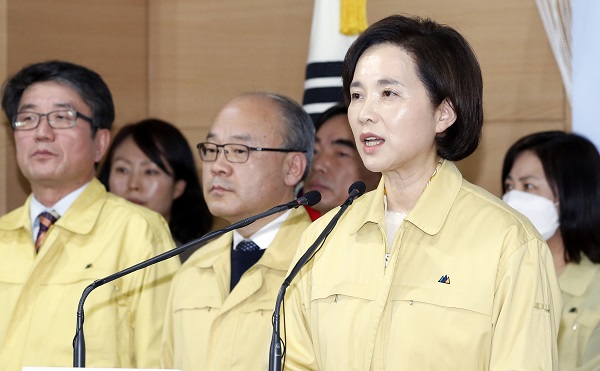 Schools will remain closed for another two weeks, education officials announced Tuesday, the third delay of the start of the school year, which will now begin April 6.

Korean kindergartens, elementary, middle and high schools were supposed to start school on March 2, but education officials have been delaying the start date for five weeks out of fear that children may spread the coronavirus in classrooms.

Universities were exempt from the closure order, but the Ministry of Education advised universities last month to postpone the starts of their school years by up to four weeks. In response, most postponed the starts by two weeks from March 2 to March 16 and said they would offer online courses for two more weeks by the end of this month.

Among the 84 cases, 32 were in Daegu, 31 in Gyeonggi, 12 in Seoul, five in North Gyeongsang and one each in Incheon and South Gyeongsang.

The death toll was 81 at Monday midnight, six more than the previous day. A total of 1,401 people were proclaimed fully recovered, 264 more than the day before.

At least 51 cases of the coronavirus have now been traced to a small Protestant church in Seongnam, Gyeonggi, just south of Seoul, making it the second-largest cluster in Korea’s capital area, which includes Seoul, the surrounding province of Gyeonggi and the neighboring city of Incheon.

With alarming growth in infections in foreign countries, the Korean government announced Tuesday that its special entry procedures will be expanded to arrivals from all countries starting Thursday.

The special entry procedures were applied to visitors from all European countries and some Asian countries previously.

All visitors will have to fill out a questionnaire asking about possible symptoms related to the coronavirus and have their temperatures measured. Those who wish to remain in Korea must inform customs authorities of where they will stay as well as their phone number. They must also download an app, through which they are required to inform health authorities about their daily condition.

Visitors from China’s Hubei Province and its capital of Wuhan remain prohibited.