SMEs get loan relief until September

SMEs get loan relief until September 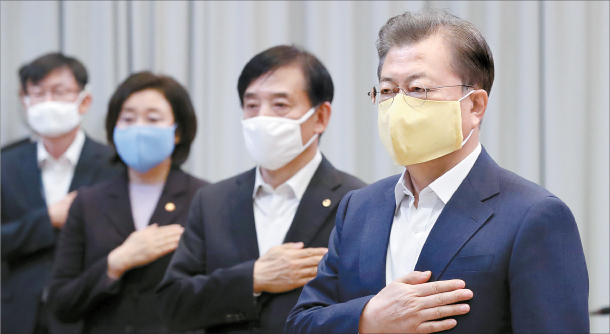 The self-employed and small businesses hurt by the coronavirus outbreak will not have to pay back loans until September - including loans from non-banking companies such as savings banks and insurance and credit card companies.

Businesses that borrow from non-banking financial companies usually have such low credit scores that they can’t borrow from banks and are charged much higher interest rates.

President Moon Jae-in announced the policy at his first emergency economic council meeting Thursday at the Blue House, part of a 50 trillion won ($38.9 billion) emergency aid effort for small businesses, which is separate from the 11.7 trillion won supplementary budget approved by the National Assembly Tuesday.

It is supposed to help small businesses from collapsing as the Covid-19 crisis is expected to hurt them more than such crises as the 2008 global financial meltdown.

Moon called the aid comprehensive and unprecedented in size.

The president noted that for the first time, banks and non-banking financial institutions such as savings banks, which is what Korea calls consumer finance companies, are extending loan maturities and easing loan payment schedules for small- and medium-sized enterprises (SMEs).

The companies have agreed to extending maturities of loans held by companies affected by Covid-19 directly or indirectly for more than six months. Interest payments will be suspended for six month.

The president said 12 trillion won in loans with interest rates of 1.5 percent will be offered to small business owners. The loans will be made through state-owned financial institutions and commercial banks.

That interest rate is lower than the lowest rate currently offered by banks, which is 2.55 percent.

Additionally 5.5 trillion won in loan guarantees will be offered to SMEs.

Businesses with revenue of less than 100 million won can get government guarantees on loans of up to 50 million won. Loan guarantees are also expected to help small business owners with low credit scores get financing.

“No matter what measures are introduced, they will only be meaningful if they succeed in practice,” Moon said.

He stressed that this was just a first step to help the self-employed and SMEs.

“We have to also think of supportive measures for people who either lost incomes or jobs due to the Covid-19 outbreak,” Moon said.

He told local governments to step up as well, saying there is a limit to the central government’s resources.

“This is not a usual situation, and as such, we have to move beyond previous methods,” Moon said. “Our goal is to prevent a collapse.”

In a press briefing held after the emergency council meeting, Finance Minister Hong Nam-ki raised the possibility of a second supplementary budget being promoted by the ruling Democratic Party.

“The government has to continuously come up with measures to overcome the economic crisis while reviewing fiscal resources,” Hong said.

The fund is expected to be larger than 10 trillion won.

“[The government] will exert all efforts so that companies will not face difficulties in securing funding by swiftly activating contingency plans,” Vice Finance Minister Kim Yong-beom said during a separate meeting.

“The competition to secure dollar liquidity seems to be getting worse with the dollar appreciating in the global financial markets and spreads in the bond market widening,” Kim said.

“The government is closely monitoring the market situation and preparing for possible global capital problems and worsening corporate performances as the Covid-19 crisis expands and prolongs.”

During the 2008 global financial meltdown, the Lee Myung-bak administration created a 10 trillion won market stabilization fund, with the help of state-owned financial companies and commercial banks and brokerage firms. The fund was used to inject liquidity into companies by buying corporate bonds.

Financial Services Commission Chairman Eun Sung-soo said the size of any new fund will be larger than the 10 trillion won in 2008.

“We will discuss the plan with heads of banks and financial institutions tomorrow,” Eun said.