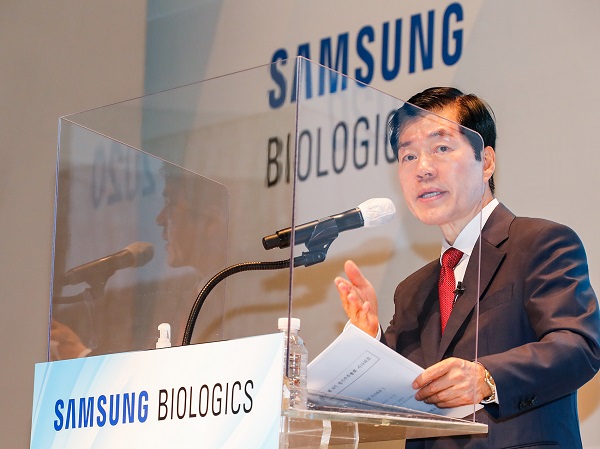 Samsung BioLogics CEO Kim Tae-han speaks during the annual shareholder meeting Friday held in Incheon. Shareholders voted to reappoint Kim as a board member for another three years. [SAMSUNG BIOLOGICS]

At the ninth annual shareholder meeting held in Incheon, Samsung BioLogics shareholders voted to reappoint Kim as a board member for another three years. Kim vowed that Samsung BioLogics will continue its growth this year despite business difficulties due to the coronavirus outbreak with a vision toward innovation.

“The competition within the biopharmaceutical sector is expected to be even fiercer this year,” Kim said in an opening address at the meeting.

“Global pharmaceutical companies are making visible progress in making novel treatments for Alzheimer’s disease, and biotech is growing in many areas, both of which present great opportunities for us to secure new clients.”

The Alzheimer’s disease treatment market is an area that Samsung BioLogics has been targeting in a bid to attract new clients based on its biomanufacturing capacity of 364,000 liters (96,160 gallons), which is the largest in the world.

Kim said the company will now focus on investing in human resources and improving manufacturing practices with an enhanced supply chain to better compete with its global counterparts.

The company believe its third biomanufacturing plant will reach maximum operation rate by 2022, which could lead to the construction of the fourth manufacturing facility.

Also at the meeting Friday, Samsung BioLogics shareholders voted to appoint Executive Vice President John Rim as a board member. Rim is one of the key company executives that Samsung BioLogics is betting on to make connections and help win more global clients as it makes its first overseas expansion next month.

Starting with the establishment of a contract development organization research center in San Francisco this year, Samsung BioLogics is looking to continue overseas expansion by targeting Europe, the eastern United States and China.

Samsung BioLogics shareholders also voted to appoint its first female outside director for the board. Eunice Kim, a law professor at Ewha Womans University who spent years serving in compliance roles for a number of companies including Citigroup, KB Financial Group and Hana Financial Group, will be in charge of ensuring Samsung BioLogics follows ethical business practices.

With the two new appointments, Samsung BioLogics has increased its board size to a total of seven, four of which are internal members and the rest being outside directors. The company said the new board appointments will help Samsung BioLogics better respond to the changing business environment with improved governance ability.