Visitors from Europe being held for testing for 24 hours

Visitors from Europe being held for testing for 24 hours

Passengers who arrived Sunday at Incheon International Airport on a flight from Frankfurt board a chartered bus to a testing center for the new coronavirus as the Korean government tightened its quarantine procedures for inbound travelers from Europe. [YONHAP]

Korea began testing all travelers coming from Europe for the coronavirus Sunday - Korean nationals and foreigners alike - and holding them for 24 hours until the results of their tests come through.

After that initial test, all travelers will have to go into 14 days of self-quarantine or government quarantine - even those who are confirmed negative for the disease.

The measures come as Korea, which has seen a decrease locally in new cases of the coronavirus in the past week, tries to prevent a spike in imported cases.

Travelers coming into Korea from Europe will be separated into two groups: people showing symptoms and people without symptoms. Those without symptoms will be transported by bus to one of seven temporary accommodations arranged by the government near Seoul, where they will be tested and stay for up to 24 hours to await results. 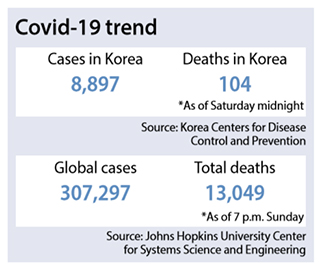 Passengers with symptoms will be tested in one of three separate quarantine facilities.

Those who test positive will be treated at designated hospitals or treatment facilities.

The Korea Centers for Disease Control and Prevention (KCDC) said that around 190 single rooms have been arranged for people with symptoms and 1,000 rooms for those without. The temporary accommodations for asymptomatic travelers include an SK training facility in Incheon, a Korail institute in Gyeonggi and several state-run training facilities such as the Institute of Justice in Jincheon, North Chungcheong.

Testing labs will operate at quarantine centers around the clock.

The KCDC said 52 medical personnel and some 220 support workers sent by local governments were dispatched for the latest quarantine measures.

People who have somewhere to stay in Korea who test negative will be required to self-isolate at home for two weeks. Those planning longer stays who don’t have a residence in Korea will be isolated at government-arranged facilities.

The Korean government will provide some support to cover living expenses for people coming from Europe who are quarantined.

Foreigners coming from Europe for shorter than two weeks, including business trips, will not be put into two-week quarantine if they test negative, but health authorities will check their conditions on a daily basis by phone.

Both Koreans and foreigners who do not abide by the quarantine rules can face fines of up to 3 million won ($2,400).

Around 8,500 passengers were expected to fly into Korea Sunday, of which around 1,000 travelers were expected from Europe, with flights scheduled from Frankfurt, London, Amsterdam and Paris. They were informed of the new regulations before boarding flights.

Following a spike in coronavirus cases abroad, travelers arriving in Korea since last Thursday have been required to undergo special entry procedures, including temperature checks, filling out a health questionnaire and downloading a mobile app for monitoring their health.

There were over 307,000 confirmed Covid-19 cases globally and 13,000 deaths as of Sunday, according to the Johns Hopkins University’s Center for Systems Science and Engineering.

The United States has over 26,000 confirmed cases and over 320 deaths, and California and New York are among states forcing nonessential workers to stay home.

Korea has seen a slowdown in new cases and the daily rate of infections were generally in the double digits in the past week, with the exceptions of Wednesday and Friday.

In late January and early February, hundreds of Koreans and family members evacuated from Wuhan in China’s Hubei Province, the original epicenter of the new coronavirus, were required to undergo quarantine for 14 days in government training facilities. Korea has barred entry to foreigners coming in from Hubei since early February.

However, Korea has so far avoided lockdowns or any other entry bans amid the global pandemic.

That is now starting to change.

The KCDC said Sunday that 98 new cases were tallied Saturday, bringing the nation’s total infections to 8,897, and a total of 104 deaths.

Of these 98 new cases, 15 patients, or 15.3 percent, were infected abroad, of which eight were from Europe and five from the United States, according to the KCDC.

Korea has tested over 331,000 people, and 2,909 people have recovered and been discharged.

Daegu, where a majority of the first wave of cases in Korea were located, has 6,387 cases, with 43 new cases as of Sunday. Seoul has seen a spike in cases in the past week, with a total of 324 cases, and 337 cases in nearby Gyeonggi.

The average mortality rate stood at 1.17 percent as of Saturday, but for those 80 and above, the fatality rate was 10.46 percent, according to the KCDC.

Health authorities also continue to remain cautious about clusters of infections especially with recent outbreaks at a call center in Guro District in western Seoul and a Protestant church in Seongnam, Gyeonggi.

The KCDC said that 80.9 percent of domestic cases were related to cluster infections.

Starting Sunday, the Korean government called for the suspension of religious, entertainment and indoor sports activities for 15 days through April 5 in order to contain the coronavirus. In case the activities must be held, organizers are expected to abide by quarantine authorities’ measures or be penalized.

In a press conference Saturday, Prime Minister Chung Sye-kyun urged the suspension of such activities, stressing the importance of social distancing for the next two weeks calling it a “critical period” to contain the coronavirus.

so the following two weeks are critical for the schools to reopen without another delay on April 6.

“There is no place in the world safe from the Covid-19,” said Chung, referring to strict lockdowns and quarantine measures happening in some countries.

“The Korean people have been recognized overseas for their mature civic consciousness, the selfless efforts of our medical personnel as well as for our outstanding health system,” said Chung. “But this is not the time to lower our guard.”

Chung urged people to avoid going out for nonessential reasons for the next two weeks, to avoid crowded places and to postpone or cancel travel plans.

He advised avoiding locations like nursing homes where elderly people are most exposed.

The government also advised against visiting places where young people gather in confined places such as PC or internet cafes, hagwon (cram schools) and entertainment facilities including noraebang (singing rooms) and even night clubs.

The Seoul Metropolitan Government said that churches and religious groups that carry out services will be responsible for all costs of disinfection and treatment should a participant get infected.

Despite the government recommendations, eight large churches held services Sunday under the monitoring of police dispatched by the Seoul city government.

Prime Minister Chung in a meeting of the Central Disaster and Safety Countermeasures Headquarters Sunday warned the government will take legal action against any breach of quarantine measures.

As of Sunday, 175 countries and territories have some form of entry ban or strengthened quarantine measures on travelers who have been in Korea, according to Seoul’s Foreign Ministry.

Korean Foreign Minister Kang Kyung-wha on Friday held a 70-minute teleconference with her counterparts in countries affected by the coronavirus including Italy, Canada, Australia, Brazil, Turkey and the European Union to discuss international cooperation.