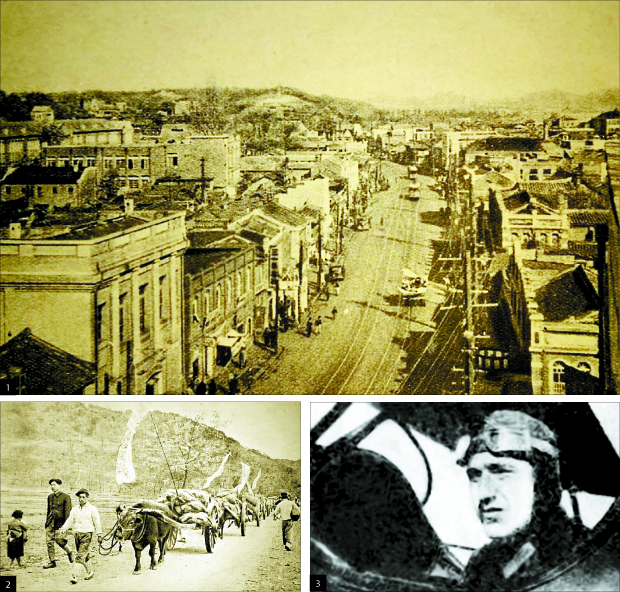 1. View of Pyongyang before the Korean War 2. The countryside in North Korea 3. The first Hungarian envoy to Pyongyang, Sandor Simics (1901-1976) [Hungarian Embassy]

Reports from Pyongyang during the Korean War ①

Hungary and the easternmost state of the Soviet bloc, North Korea, established diplomatic ties on Nov. 11, 1948. However, the first Hungarian diplomats arrived to the Northern part of the Korean Peninsula only one and a half years later. Their reports from Pyongyang are very important sources about the on-the-spot circumstances in North Korea before and during the Korean War.

The first Hungarian envoy, Sandor Simics, was a committed communist cadre, who got involved in communist activities around the end of World War I, and lived in the Soviet Union from the early 1920s. He became a pilot in the air force of the Soviet Red Army, and served in Kamchatka. Simics left the Soviet Union for Hungary after World War II, where he had important positions in the forming socialist regime. According to the archive of Hungarian diplomatic reports, he and his colleagues reached North Korea in April 1950, from Russia’s Far Eastern port of Vladivostok. After a journey on the East Sea, the diplomats arrived to the town of Ranam in the North, where they were greeted by the protocol chief of the Ministry of Foreign Affairs and the party secretary of North Hamgyong Province.

The diplomats participated in a welcoming reception and left for the capital on a special train. In Pyongyang, the Hungarians were accommodated in the local Intourist Hotel, where they received a nicely furnished room. However, the envoy and his colleagues had a hard time due to the lack of a bathroom. Moreover, the Hungarians also had difficulties because of the Korean food, which mainly consisted of seafood. Simics mentioned in his report that they received some kind of “sea cabbage,” which was inedible for them. It was probably seaweed, which is called miyeok in Korean; the main ingredient of the famous Korean seaweed soup, miyeokguk. The envoy also wrote about “big spiders from the sea” that were also served to them. These were probably gazami crabs, called kkotke in Korean. Finally, the Hungarians decided to obtain a small pot, and ended up cooking their own food in their hotel room.

Simics presented his credentials on April 20, 1950, to Kim Du-bong, who served as the nominal head of the North Korean state. However, the Hungarian envoy was unable to meet with Prime Minister Kim Il Sung and Foreign Minister Park Hon-yong, because they went to inspect the “southern borders.” This suggests that the North Korean leadership was probably preparing for some kind of action at the border. The outbreak of the Korean War two months later indicates the kind of action they were preparing for.

Finally, Kim and Park arrived back to Pyongyang on April 28, and the following day, the foreign minister welcomed the Hungarian envoy. Park Hon-yong, the former leader of the South Korean communists, had moved to the North only two years earlier. He became one of the most important figures in the North Korean regime behind Kim Il Sung, but right after the Korean War he was purged by his own comrades during the regime’s first large-scale show trial. Turning back to the minister’s meeting with the Hungarian envoy, right after the mutual polite greetings, Park explained the situation of North Korea in detail and told Simics that the greatest hardship was the lack of well-trained cadres at that time. In a chemical factory, where more than 1,000 Japanese engineers and technicians worked during the colonial rule, only six Korean engineers were available after the liberation, but four of them came from the Soviet Union. The minister mentioned that there were only two Korean railway engineers in the whole country. Due to the lack of well-trained cadres, the leadership sent 600 young Koreans to the Soviet Union to study there. At that point, the Hungarian envoy tried to shift the topic of the conversation to the Hungarian-North Korean relations. Simics suggested that they should establish direct contacts between the national banks of the two countries, and that they should negotiate about establishing postal and telephone connections. However, Park told him that his country would like to establish those kinds of connections a bit later. It is likely that the North Korean leadership was very busy with the preparations for the Korean War, and did not have the capacity to pay attention to a faraway country at that time.

The first meeting with the North Korean Prime Minister Kim Il Sung happened in the same polite mood on April 30, 1950. At the beginning, Kim inquired about the Hungarian party leader, and after that, he asked about the Hungarian rail engine and ship production. The North Korean leader told the envoy that his country, by utilizing long-term loans, would like to buy products made by Hungarians. However, Simics explained that Hungary does not have any raw material; thus, it all has to be bought abroad, and that is why the products made by Hungarians have to follow the prices of the world market. According to the envoy’s report, he knew well that the Soviet Union generously offered long-term loans to North Korea, but he wanted to cool down those kinds expectations toward Hungary.

Visiting a vintage factory in Pyongyang

From May 1950, the Hungarian envoy Sandor Simics started his genuine diplomatic activities in Pyongyang. On May 19, he invited Kwon Oh-jik, the designated North Korean envoy to Budapest, and his staff for a farewell dinner. It is interesting to mention that the North Korean diplomats attended the dinner with their wives, which would not be possible nowadays. According to the archive diplomatic report, after the dinner, Simics and his guests turned on the gramophone to listen to some music, and they danced with their wives. Another episode of his genuine diplomatic activity was an on-the-spot visit in a corn processing factory on the outskirts of Pyongyang. The visit was suggested several times by Simics, but the North Korean Ministry of Foreign Affairs kept procrastinating. Finally, the envoy was allowed to visit the site on June 19, 1950. According to the report, the factory was a real vintage site, which was built by the Americans before Japanese colonial rule, during the reign of Emperor Gojong. The factory made various products from corn: corn flour, icing sugar, cattle cake, cooking oil and soap. The envoy emphasized in his report that the vintage technology seemed to be very simple and primitive, but the site had its own electricity generator which was fueled with coal dust.

Six days later, the Korean War broke out. The Hungarians — the envoy, two female staff members, a male assistant, a driver and two kids — were still staying in the Intourist Hotel at that time, but the North Korean authorities had already begun to modernize three houses for the Hungarian legation. The developments of the war were described according to the official North Korean announcements in diplomatic reports. Simics wrote that the first American bombardments against Pyongyang happened on June 29, 1950, and the city was unprepared for the air raids. The sirens usually went off only when a bombardment had already started. It was only after the first air raids that the government ordered shelters be built for citizens, and there were no available shelters for the Hungarian diplomats. During the first air raids, the Hungarians brought their diplomatic stamps and most important documents, and hid under the stairs of the Intourist Hotel. However, the building was made of wood, therefore the whole building could have burnt down. Furthermore, the Intourist Hotel was on the opposite side of the “most important” military building of Pyongyang, which was equipped with machine gun nests. The whole neighborhood was a potential target.

Moving to the legation during the bombardment

Due to the continuous air raids, North Korean authorities quickened the modernization works on the houses designated for the Hungarian legation. The appointed date of moving from the Intourist Hotel to the revamped houses was July 3, 1950, and the North Korean Ministry of Foreign Affairs ordered ox carts for the move. During the loading of the carts, an air raid began, and after the carts departed for the new venue, the bombardment started again. Therefore, the carts headed back to the hotel to wait under the trees, while the packages of the diplomats were wrapped with blankets on the carts. Finally, the envoy and his staff reached the new legation in the evening, but they did not have the strength to unload the packages and set up their beds in the empty rooms, so everybody just fell asleep on the floor. In the following days, the Hungarians equipped their office space in the basement and excavated a buried shelter, which had probably been built by the former owner during the Japanese rule. However, due to the continuous bombardments, the diplomats decided to send their female staff members and kids away from Pyongyang. The ladies and the kids were settled in a small village 20 kilometers (12 miles) away from the capital, where they were accommodated in a former church. They slept on the floor in the unfurnished building, washed their clothes in a stream, and brought drinking water from 3 kilometers away. Their food supply was sent from the Hungarian legation every day.

During the first weeks of the war, the biggest hardship for the diplomatic corps in Pyongyang was the emergence of a food shortage. The vintage corn processing factory, which made various food products, was also destroyed by the bombardments. According to the diplomatic report written by Simics, food gradually disappeared from the local markets and stores, and the prices increased. For example, the price of 1 kilogram (2.2 pounds) of meat, which was 150 won before the war, went up to 260 won. Ten eggs cost 70 won before, but the price went up to 120 won. There were exclusive stores for diplomats, but those sold only canned fruits and textiles. However, the Soviet store, which was dedicated to the foreign colony, was able to sell bread and milk continuously. The envoy tried to ask for an exceptional food supply from Budapest, but the Ministry of Foreign Affairs refused to send it due to the distance. Seeing the archive diplomatic letters, the ministry might have not understood well the seriousness of the situation. The official who wrote back to Simics asked why the envoy wanted to eat Hungarian food specialties so much and said that it would be much better to ask the Soviet embassy in Pyongyang how they purchase food on the spot. In his short answer, Simics wrote that the legation did not want to receive culinary specialties, they just asked for an emergency food supply. Finally, the ministry ordered the Hungarian embassy in Beijing to send food supply to the legation in Pyongyang. (To be continued…)