‘Kingdom’ tackles power, greed: Creator knows fans like ‘gory’ scenes, but she chooses not to look

‘Kingdom’ tackles power, greed: Creator knows fans like ‘gory’ scenes, but she chooses not to look

The second season of “Kingdom,” the Joseon Dynasty zombie apocalypse series from Netflix, satisfied fans’ desire for gore - with all sorts of body parts being chopped or bitten off throughout the show - but left them thirsty for more stories.

Ironically, the show’s creator, writer Kim Eun-hee, revealed in an interview last Friday that she cannot watch things that are “too gory.”

“People either don’t believe me or laugh when I say so, but if things get too scary or gory, I can barely watch them,” Kim said. “Except for parts that are absolutely necessary, I’m not the one to describe [the gory parts] too vividly or accurately. If the fans were satisfied by the sanguine details in this season, the credit goes to director Park In-je.”

Looking into Kim’s career, although she has tried her hand at various genres, her biggest successes have been suspenseful thrillers such as the SBS drama series “Sign” (2011) and tvN series “Signal” (2016). Last year, she became globally recognized after the first season of “Kingdom” immediately became a worldwide sensation. 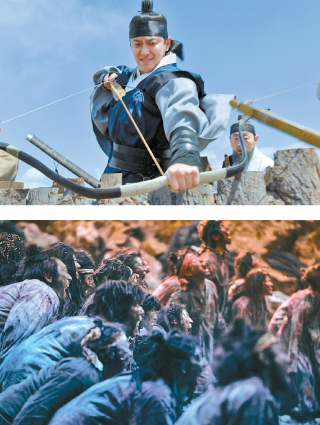 At top, Prince Lee Chang (played by Ju Ji-hoon) fends off zombies trying to climb the walls of the castle. Above, zombies hunt for blood. [NETFLIX]

“I’ve been wanting to do a zombie series for so long, and the first impression I got from the zombies was their hunger,” Kim said. “So I would ask myself, ‘Where does this hunger come from?’ And ultimately, I thought the hunger was a byproduct of bad politics. So when I questioned why [the royals and their subjects] would make bad decisions, it was due to their greed: bloodlines, heritage, things that they can’t have. That’s how I configured the Kingdom universe.”

“It’s also fine if people just enjoy the thrill of the zombie chase, but I also want them to ask themselves, ‘What is the meaning of politics?’ ‘What does it mean to become a true leader?’” Kim added.

Of the many characteristics that fans of the show have enjoyed, what was most striking about the “Kingdom” zombies was their speed. The zombies even earned the affectionate nickname “K-zombies,” and this wasn’t the first time zombies in local films were noticed for their agility: Director Yeon Sang-ho’s 2016 zombie film “Train to Busan” featured zombies that inched closer and closer to the protagonists due to their exceptional speed.

Another unique aspect of the zombies featured in “Kingdom” is how they get infected. The epidemic originates from a particular herb, called saengsacho, where parasite eggs later hatch when consumed by humans and latch onto people’s brains and turn them into zombies.

The motive comes from the writer’s fascination with parasites.

“I was always intrigued by parasites,” Kim said. “I’m interested in anything about parasites, viruses and germs. So I took reference from a lot of books, and thought it would be fun to fuse zombies with parasites. Since it would be realistically improbable for people to directly consume parasite eggs, I came up with saengsacho, the resurrection plant.”

In her works, Kim is also famous for introducing fantasy elements that are close to reality.

“In ‘Signal,’ it was the walkie-talkie. I wanted it to be a hope for the characters: That we can change the future with our will,” Kim explained. “For this epidemic, I wanted to dramatize the series’ message of that price that people have to pay due to their greed.

“Plus, in a Confucian society in which social hierarchy is everything, once they turn into zombies, that doesn’t matter anymore. Whether they were originally kings or from the lowest of the social classes, it doesn’t matter once they’re infected. Hunger is a universal instinct that all living things possess.”

How the zombie plague spreads in a blink of an eye and the different responses and actions that the characters take is eerily similar to the virus pandemic that the world is currently suffering from. However, at the press conference prior to the season premiere, Kim firmly concluded that it was “pure coincidence” that the season overlaps with the outbreak.

“Nobody expected this kind of epidemic to happen in real life,” Kim said. “Regardless of linking the virus to the series, it’s serious enough to shake up everyone’s lives. I just hope that like in the series, this nightmare will end once spring arrives.”

Kim also hinted at another season that is likely to arrive on the platform. But everything remains undecided for now, as the writer has yet to have signed any contract with Netflix for a third season. Although prior fans expected some deaths and sacrifices, what they didn’t anticipate were a large cluster of deaths among the show’s main characters.

But Kim reassured them that there will be new villains for the prince to battle soon.

“There were some responses commenting that they were surprised at Lee Chang’s choice [of not taking over the throne],” Kim said. “But the way I see it is that I don’t think the character would have made the right choice if he decides to become a king without caring for what happens to his country. Saengsacho still exists throughout the country, and if the prince has truly grown up [to be a true leader], he will work to trace and exterminate the plague once and for all.”

His expedition takes him north to China where he meets a mysterious warrior, portrayed by actor Jun Ji-hyun, as Netflix hinted last November.

“If Jun does agree to appear in the next season, she will definitely be one of the main characters that leads the story along with the prince,” Kim said. “And since the story will take place in China, in a place that hasn’t been mentioned in local films or series before, it will be about the residents there fighting fiercely for their survival.”