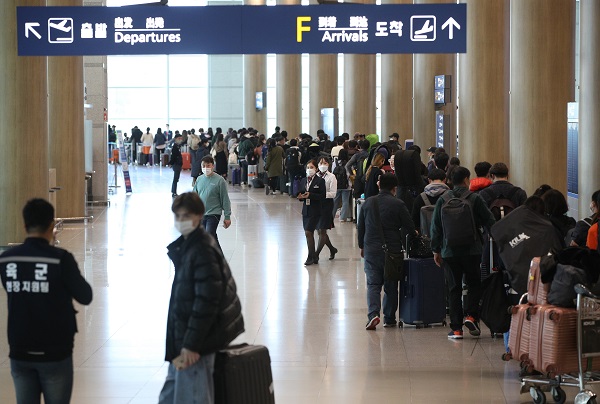 Travelers from Frankfurt wait in line for virus tests at Terminal 1 of Incheon International Airport in Incheon on Monday. [NEWS1]

According to the Korea Centers for Disease Control and Prevention (KCDC), seven more people died from complications related to the coronavirus, putting the total number of fatalities in Korea at 111.

Of the new patients, 24 were from Daegu, 14 from Gyeonggi and six from Seoul – numbers markedly lower than in the previous week, when the capital saw a spike in cases owing to outbreaks in some clusters. A total of 13 of the new cases were people returning from abroad who had been found positive for the virus at testing facilities at Incheon International Airport.

The number of people released from quarantine after recovering from the virus reached 3,166, far outpacing the number of new infections. The rapidly growing number of recoveries in recent days has raised the recovery rate to 35.8 percent on Monday, according to the KCDC.

One of those discharged was a 93-year-old woman living at a nursing hospital in Gyeongsan, North Gyeongsang, who after 13 days of treatment at a hospital in Seoul tested negative in two separate tests.

She is the oldest person in Korea to have recovered from Covid-19, health officials said, noting that she had no significant underlying diseases that could have worsened her condition.

While the disease’s spread has markedly slowed since major spikes in February, health officials on Monday stressed numbers meant little unless infections in clusters were contained.

“The nature of Covid-19 is such that even if we are a little lax there could be cluster infections,” said Yoon Tae-ho, a senior health ministry official, at a press briefing on Monday. “What is most important is how to stop sporadic cluster cases [domestically] and infections spread by people coming from abroad.”

With religious services emerging as major hotspots of contagion in recent days, the government on Monday also stepped up measures to enforce its guidelines ON social distancing among the public.

Prime Minister Chung Sye-kyun in a morning health meeting warned that “stern legal action” would follow for churches in the country that have violated government orders against mass gatherings.

The remark came in response to decisions by hundreds of Protestant churches across Korea to hold services on Sunday in spite of the government’s orders against large public gatherings.

“[Such meetings] are actions that threaten not only the individuals partaking in them but also the safety of our entire community,” Chung said. “Now is a time of emergency akin to a state of war, so executive orders should not be lightly regarded as a bluff.”