[NEWS IN FOCUS] Markets in disarray, yet some see a safe bet with Samsung Electronics

[NEWS IN FOCUS] Markets in disarray, yet some see a safe bet with Samsung Electronics

Bae Sun-jung, a Seoul resident in her early 30s, sunk her 5 million won ($4,000) in savings into a Samsung Electronics share on March 13, as soon as it fell under the 50,000 won mark. The days since have been rough on Korea’s stock market, which proceeded to crash on intensifying fear over the coronavirus pandemic, and it has largely taken Samsung’s share price along with it.

Although not an avid stock trader, Bae has nursed a habit of monitoring Samsung Electronics shares after turning a profit on the stock last year. 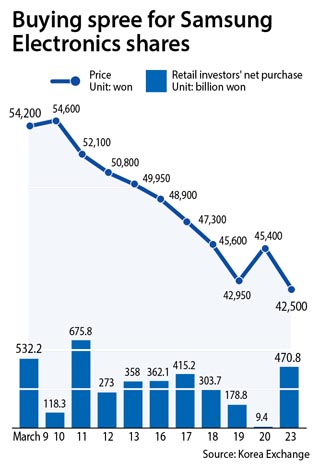 “I have an unconditional faith towards Samsung Electronics’ share price,” said Bae. “Although it has plummeted even further now, and I am seeing minus profit, I believe it will rebound within the next year. I still plan to put all my spare cash into buying them.”

She’s not alone. Despite the coronavirus-driven collapse of the Kospi and stock markets around the globe, retail investors have been on a relentless buying spree recently for the tech giant’s shares.

For the past 11 trading days, retail investors have purchased a net 3.8 trillion won worth of Samsung Electronics shares. During the same period, foreign investors dumped a net 4.1 trillion won of the shares.

Bae said she purchased 100 shares of Samsung Electronics for 47,000 won each on March 13. Last week the share price approached a one-year low, falling to the 42,000-won range, but had recovered to 46,950 by the closing bell on Tuesday.

Kim Bum-joo recently dumped 300 shares of the company’s stock after it fell from her purchasing price of 54,000 won to 51,000 won. But the Seoul lawyer she said she would buy even more once the price falls below 40,000 won.

“I don’t unconditionally think that Samsung Electronics shares will increase infinitely, but I do believe that it won’t collapse entirely because the country will do something to save the company when it really is in a crisis. It is my go-to investment item to play around with idle money, because I don’t have time to monitor stock prices in real-time.”

Retail investors in Korea have been on a relentless buying spree for the tech giant’s shares since growing fears over the Covid-19 virus shook up the country’s stock market.

And for some investors, they aren’t just plowing their spare change into Samsung. Some are even taking out loans to pick up more stock.

According to Korea Financial Investment Association, the amount of Samsung Electronics shares purchased with outstanding loans jumped by 70 percent as of March 18, increasing from 4.1 million shares in February to 5.9 million.

For many of Samsung’s believers, their zeal for the company is rooted in an expectation that history will repeat itself.

During the financial crisis in 2008, shares of Samsung Electronics had plummeted to as low as 407,500 won on Oct. 24, 2008, before the company split its stocks. Just five months earlier, the price had been nearly double that - hovering around 700,000 won per share.

“Samsung Electronics shares cannot be perceived as just ‘one of those shares’ in the main bourse,” said Sung Tae-yoon, an economics professor at Yonsei University. “It is highly perceived as a safe haven asset for retail investors that is guaranteed to bring in some extra cash sooner or later. “

Major brokerage firms are downsizing their target stock price this month for Samsung Electronics for the first time since December, when trade friction intensified between the United States and China.

“Although the semiconductor business will get better this year, business for complete products like home appliances and smartphones will be dismal,” Hyundai Motor Securities analyst Noh Geun-chang said.

“In the past, foreign investors saw Samsung shares just like retail investors are seeing them right now, believing it would eventually recover,” said Professor Sung. “But now, they are on a selling spree meaning that to their analysis, Samsung Electronics shares are not as safe as they used to be.”