Travelers from the United States will face new restrictions when they enter Korea starting Friday, but not as rigorous as those on travelers from Europe.

All travelers from the United States including Korean nationals will undergo temperature checks and be asked if they have experienced symptoms of the coronavirus on arrival at Korean airports. Coronavirus tests will be done on people with symptoms and short-term business visitors. 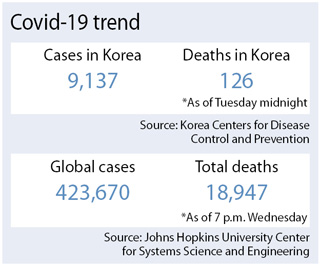 Visitors staying longer than 90 days who don’t show symptoms will be told to self-quarantine for 14 days in their homes.

Anyone testing positive for the coronavirus will be transferred to a government-run isolation facility or to a hospital for treatment.

Short-term business visitors who test negative will be released. During their stay, they will be contacted daily by Korean health authorities and asked about their health.

Since Sunday, all travelers from Europe have been forced to be tested, and in case they intend to stay for longer than 90 days, they have to undergo a two-week isolation period.

Homegrown infections are falling on a daily basis, and the numbers of infected people arriving in Korea are growing, particularly after all European visitors started being tested.

Korean health officials explained Wednesday that the outbreak in the United States wasn’t as severe as in Europe, which is why the government had different quarantine measures for arrivals from both places.

Yet in the same breath, health officials admitted they were closely monitoring the U.S. situation and may decide later to apply stricter measures.

The Korea Centers for Disease Control and Prevention (KCDC) announced Wednesday morning that 100 new cases of infections were tallied Tuesday, bringing Korea’s total case load to 9,137. Of the 100 cases, 51 were imported - 34 tested positive at customs, while 17 tested positive after “settling in the local society.”

All people arriving from the United States from Friday onward will have to fill out a questionnaire asking about possible symptoms and have their temperatures measured. In case they show symptoms of the coronavirus, they will have to wait at the airport to be tested. If they test negative, they will be allowed to go but still have to report their condition to health officials everyday for two weeks through a smartphone app.

In case their results turn out positive, they will either be sent to a hospital or a government-run isolation facility for medical treatment, depending on the severity of their illness.

The process above is the same as the one currently imposed on U.S. arrivals.

What will change from Friday is that short-term visitors who don’t exhibit any symptoms of the virus will still have to be tested at the airport and prove they’re not infected in order to leave.

Another change is that longer-term visitors will have to self-isolate at home for two weeks whether or not they’re feeling symptoms of the virus. If they do feel symptoms, they will have to call the KCDC’s hotline at 1339 to be tested for the coronavirus.

Korean health officials said Wednesday that visitors staying longer than 90 days will be handed a legal document at the airport informing them about their mandatory self-isolation period and process. If they violate the order, they can face up to a year in prison or a maximum 10 million won ($8,100) in fines.

If anyone violates the self-quarantine guidelines and “leave the area or pursues some sort of personal business,” the Korean government will press criminal charges against the alleged perpetrator and hold them legally responsible, Sohn Young-rae, spokesperson of the Ministry of Health and Welfare, said Wednesday.

Health officials said most arrivals from the United States will probably fall into the longer-term stay group in light of that fact that 80 percent of U.S. arrivals were either Korean nationals returning from study abroad or business trips.

According to KCDC statistics, a total of 227 people appeared to have contracted the disease from a foreign country so far, which accounts for about 2.5 percent of total infections in Korea.

By Tuesday midnight, a total of 126 people have died of the coronavirus, up from 120 the day before. A total of 3,730 people were declared fully recovered, up from 3,507 the previous day.

Earlier Tuesday, the Korean government changed quarantine guidelines for Korean nationals arriving from Europe, saying if they don’t feel any symptoms of the virus upon their arrival at the airport, they don’t have to be tested then and there and can go home to self-isolate.

But, once they arrive home, their local health center will contact them to run a virus test on them within three days of their arrival.

Non-Koreans who arrive from Europe and plan to stay for longer than 90 days still have to be tested at the airport.

In the system launched Sunday, every single person arriving from Europe had to be tested right away.