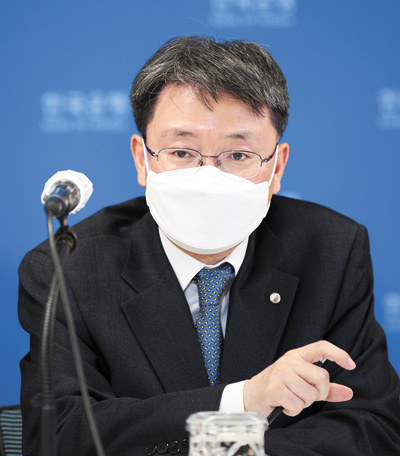 Korea’s central bank promised unlimited liquidity through repurchase operations for the next three months in an effort to keep the economy afloat through the coronavirus pandemic.

The bank has never made such a promise of an “unlimited” amount of money to financial companies, not in the Asian financial crisis in 1997 nor the global financial meltdown in 2008.

At its regular monetary policy meeting Thursday, the Bank of Korea (BOK) committed itself to massive repurchase (also known as repo) agreements from April through June to meet the market’s demand for liquidity.

A repurchase agreement allows financial institutions to sell securities on the condition of buying them back at a later time, acting as short-term loans. The buyer puts up the securities as collateral until they are repurchased.

“It could be seen as a sort of quantitative easing,” said Yoon Myun-shik, the bank’s senior deputy governor, during a briefing Thursday.

Quantitative easing in the United States takes the form of direct purchases of securities, compared to the BOK’s promise, which takes the form of lending. The U.S. Federal Reserve announced Monday it would purchase treasuries and mortgage-backed securities “in the amounts needed” to sustain the economy.

“Its characteristics are a bit different, but in a sense that the BOK agreed to fulfill the entire demand [for liquidity] in the market, it is not wrong to see it as quantitative easing,” Yoon said.

When asked if the move indicates that Korea’s economy is worse off than during the crises of 1997 and 2008, Yoon said, “The shock will be greater than the [2008] global financial meltdown.” He said it can’t be determined yet whether it’s worse than the crisis in 1997.

The bank will hold repo auctions every Tuesday starting April 2 at which financial institutions will be able to borrow at a rate of no higher than 0.85 percent.

The repo operations might extend into July and beyond, the bank said.

To maximize the impact, the central bank said it will add 11 more banks and brokerage houses to an existing pool of 22 financial companies eligible for repurchase agreements. The central bank will add to the list of state-run company securities qualified for repurchase agreements, allowing for the use of debt issued by the Korea Electric Power Corporation and the Korea Water Resources Corporation.

The newly-added securities have been selected for their healthy credit ratings, according to Yoon, to avoid any possible credit risk by the central bank.

If Korea’s financial markets continue to slide, the central bank said it will consider “additional purchase of treasury bonds” while purchases of corporate bonds or commercial papers are “undecided.”

The bank announced purchases of treasury bonds worth 1.5 trillion won ($1.2 billion) on March 19.

“The latest announcement actually exceeds market expectations,” said Shin Eol, an analyst at SK Securities. “Unless the coronavirus infection reignites, I think the financial market will settle down pretty quickly.”