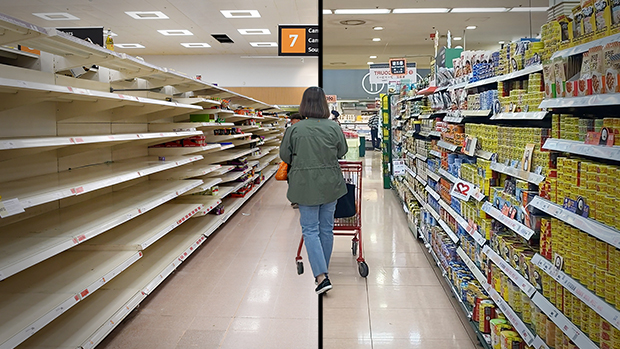 Right: A shopper browses items on Thursday at Lotte Mart near Seoul Station in central Seoul. Left: The shelves at a supermarket in Britain are almost cleared [JEON TAE-GYU]

While scenes from other countries, notably the United States, have shown bare grocery shelves denuded of toilet paper, packaged noodles and other shelf-stable necessities, Koreans appear to have been spared a panic-buying epidemic during the country’s own explosion in coronavirus cases.

At a Lotte Mart near Seoul Station in central Seoul recently, a woman offering free ramen samples said she hadn’t seen any rush to hoard noodles after Korea’s cases of Covid-19 began growing exponentially last month.
“Rather, sales shrank after the virus,” she said. “Since the store is close to Seoul Station, we served many tourists from China and Japan. But they are gone.”

The store’s shelves remain packed with staples from water, toilet paper and groceries to bottles of sanitizer and canned food.
For many Koreans it seemed - at first, in any case - that they had seen this movie before.

This is a common scene across supermarkets big and small in Korea, as shoppers see no need for any buying up of essential items despite a relatively high number of confirmed cases at more than 9,000.

“I don’t feel threatened that much to a point that I should hoard something,” said Ms. Yoo, leaving the Lotte Mart with just a single pack of pork. “People around me don’t do panic buying, because people appear assured that items won’t sell out.”

Spokespeople for Emart and Lotte Mart said that none of their stores - even in the hardest-hit areas of Daegu or North Gyeongsang - experienced panic buying.
Nor did they increase the inventory of the items they sell, they said, since they didn’t spot a notable increase in demand.

That relative stability has also been attributed to Koreans’ confidence in the government to be responsive to issues of supply and demand.
“I am just buying what I need, because I believe that the government well manages [the supply of products],” the 40 year-old Kim said.

John Brady, consumer science professor at Seoul National University, echoed that view, citing his research on the Korean authorities’ past measures to contain spinach contaminated with the E. coli.

“One of our findings was, since the government and industry moved quickly and effectively, consumer confidence returned fairly quickly,” the professor said in an e-mailed interview with Korea JoongAng Daily.

“I think that a similar thing might be happening now. Korean consumers, I believe, saw their government acting quickly so did not feel the same panic that American consumers might have felt because they were given incomplete information and slow responses.”

Many consumers say the combination of a robust delivery network across the country along with the number of e-commerce sites also helped them maintain confidence that they could get what they needed, when they needed it.

“I go to e-commerce sites for products like detergent,” said 40-year-old Kim Young-hoon, holding a reusable grocery bag as he perused the wares at Emart in Seongsu-dong, eastern Seoul, on Thursday morning.

Setting aside the well-known e-commerce players like Coupang and WeMakePrice and online channels of the large supermarket chains, Korea had 19,515 online malls as of 2018, according to the most recent data available from Statistics Korea.

The actual number is likely higher, as the agency only counts online-only businesses.

And the launch of a shopping platform by internet portal giant Naver has brought brick-and-mortar shops, department stores and retail outlets into the e-commerce world as well, letting users purchase their items at offline shops.

Given the convenience and in some cases, more competitive prices, shoppers have flocked to online retailers in recent years.
The volume of transactions reached 135 trillion won ($110 billion) in 2019, up 19.5 percent from the previous year.

Meanwhile, sales at Lotte Mart branches declined 10.2 percent between March 1 and 25 compared to the same period last year.
Its online mall saw a rise of 61.7 percent during that period, according to the retailer.

“I feel assured of great delivery service, typically arriving the next day after the order,” said Seoul resident Lee Da-hye, 34. ”I believe I can get the items whenever I need them. So I am not tempted to buy a great deal of products more than I need.”

With the introduction of delivery agencies, cheaper essential items sold at convenience stores can also be delivered within hours of the order.