Foreigners who break quarantine can be deported

Foreigners who break quarantine can be deported 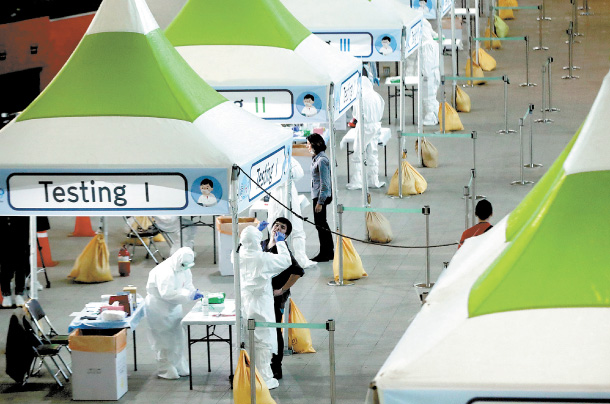 Asymptomatic foreigners from Europe get samples taken Thursday at Incheon International Airport as part of the testing process for the new coronavirus. Sixteen “open walking thru” centers have been set up at the airport to streamline testing. [YONHAP]

Health officials warned Thursday that foreigners who ignore isolation orders and get busted roaming around “without a just reason” will be expelled from Korea.

The Central Disaster and Safety Countermeasures Headquarters, the Korean government’s task force fighting the coronavirus, announced the ultimatum in a press conference Thursday morning as the numbers of coronavirus cases coming into Korea from abroad surge.

Since Sunday, the Korean government has made it mandatory for everyone entering the country from Europe - Koreans and non-Koreans alike - to self-isolate in their homes if they intend to stay long term, or longer than 90 days. From today, U.S. arrivals will face the same measures. 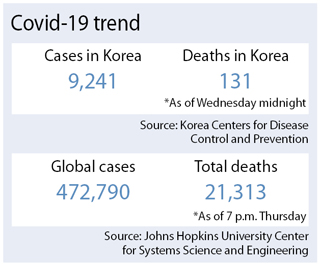 The government also warned Koreans to obey self-isolation guidelines, saying they, too, can face legal repercussions if they don’t.

“If a local government office calls a person and asks where they are, and the person replies they’re at home but are actually outside, that’s a flagrant lie and error, and that person will therefore face punishment according to the Infectious Disease Control and Prevention Act,” said Yoon Tae-ho, a member of the task force who’s a high-level official in the Ministry of Health and Welfare.

Under the act, violators of the government’s self-quarantine order may face up to 3 million won ($2,400) in fines.

The task force said police officers will be mobilized to track down the wanderers. Local government offices will be advised to open call centers to receive tip-offs about people breaching quarantine rules.

All foreigners and Koreans arriving in Korea will also be required to download a self-quarantine app that tracks their location and reports possible symptoms of the virus to local government offices for 14 days, the incubation period of the virus.

Those who refuse to download the app will be barred from entering the country, officials said.

The warnings came as the Korea Centers for Disease Control and Prevention (KCDC) said 104 new cases of the coronavirus were detected Wednesday, of which 39 were imported, bringing Korea’s total case load to 9,241.

Of Wednesday’s imported cases, 25 were from Europe, 11 from the Americas and three from other Asian countries.

At least 139 cases this week were visitors from abroad. Among Korea’s total cases, 284, or 3.1 percent, were imported, according to KCDC statistics.

As of Wednesday midnight, Korea’s death toll was 131, five more than the previous day, while 4,144 people were declared fully recovered, 414 more than the day before. The KCDC said Thursday afternoon that 56 people were in critical condition.

About 2,500 people are arriving from Europe and 1,200 from the United States each day recently, local health officials said, more than when Korea was reeling from its own coronavirus outbreak last month.

More than 80 percent of arrivals from the two regions are said to be Korean nationals, including students returning from abroad or people returning from business, as well as their families.

Daegu on Thursday announced far more rigorous quarantine measures than the Korean central government, saying every single person coming to live in the city from a foreign country will be put through a virus test within three days of their arrival in Korea, forced to stay at home under quarantine for 14 days and be tested a second time on the 12th or 13th day. Their results have to be negative for them to be freed from isolation.

Daegu Mayor Kwon Young-jin said Thursday the central government currently informs local government offices about people settling in their areas from Europe and the United States and urged that arrivals from other foreign countries should be provided as well.

Daegu was the epicenter of Korea’s coronavirus outbreak after a large cluster was discovered there in mid-February. Most homegrown infections are still from the city.

Daegu’s measures are far more stringent than the Korean central government’s general guideline for arrivals from foreign countries, which currently states that people arriving from Europe and the United States who intend to stay for more than 90 days have to self-isolate in their homes for two weeks.

Arrivals from other countries aren’t required to self-quarantine.

Under the central government’s guidelines, all people arriving from Europe have to be tested for the virus whether or not they feel symptoms of the virus. For people entering from the United States, tests are performed only on short-term visitors and those who exhibit symptoms.

To streamline virus-testing procedures at Incheon International Airport, where almost all foreign arrivals are landing, Korean health officials announced Thursday that 16 “open walking thru” sample collection centers have been established in tents on the airport grounds.

The tents can handle as many as 2,000 people to have their samples taken each day and have no walls, which means they don’t have to be disinfected after each time a sample has been taken, unlike other conventional testing clinics.

In a given hour, Yoon said, two to three people can have samples taken at an ordinary virus-testing center, six to eight people in a drive-through center and 12 people in an open walking thru center.