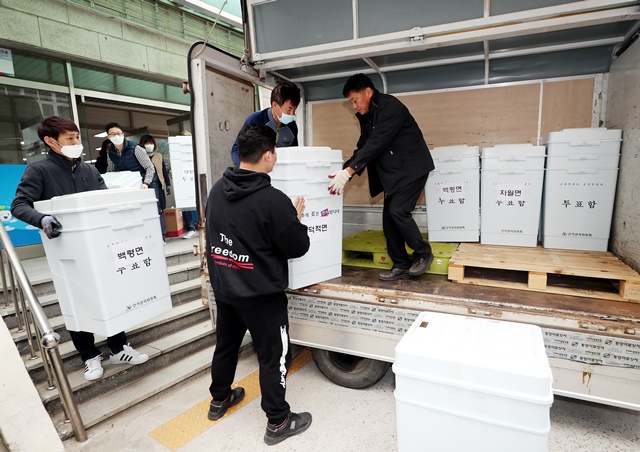 Officials on Friday load ballot boxes on trucks to transport them to local polling sites in Incheon ahead of the April 15 general election. [YONHAP]

The National Election Commission (NEC) said Thursday it will stop preparations for overseas voting at 23 Korean diplomatic missions in 17 countries until April 6 due to the coronavirus.

Because overseas voting takes place between April 1 to 6, voters in the affected areas will effectively not be able to cast ballots in the April 15 general elections.

Preparations at the Korean consulate in Wuhan, China, the epicenter of the outbreak, were halted on March 16.

If overseas voters do not vote in their foreign countries, they are allowed to return to Korea to vote. They must enter Korea before April 1, notify the authorities before April 15 and cast ballots at voting stations here.

Election preparations will be halted at 12 missions in six countries in Europe: four in Germany, three in Spain, two in Italy and one in Ireland, England and France.

In the United States, only one mission will stop election preparations — in Guam.

“We are paying special attention to the rapid spread on the U.S. East Coast,” said an NEC official. “If overseas voters’ safety is at risk, we will announce additional measures to stop election–related operations in other areas.”

In Asia, embassies in the Philippines, Papua New Guinea, Nepal and Kyrgyzstan will stop election preparations, along with the consulate in Mumbai, India.

Overseas voters in Ecuador, Honduras, Colombia, Ghana and the Republic of South Africa won’t be able to vote.

According to the NEC, home quarantines and travel restrictions are imposed in those countries, and punishments such as fines and detentions are imposed on violators. “It is, therefore, not possible to guarantee that voters can participate in voting,” the NEC official said.