As layoffs loom, they show up instead of staying home

As layoffs loom, they show up instead of staying home

Fearing job losses more than they fear getting infected, some workers would rather take a chance than shelter in place. 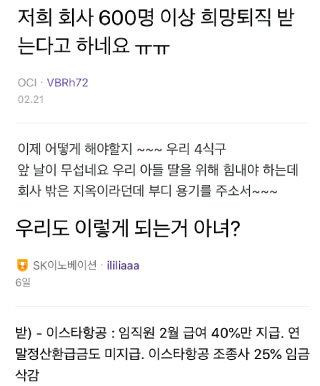 In a switch, unions are refusing to walk off the job out of fear that they would be unable to return.

One Korean Air Lines employee took an unpaid leave late last year. While she expected to return to work in May, she’s not sure if she can now.

“I’ve been working with the company for twenty years. Even if I manage to save my seat, I am afraid the company would send me in a random position and make me leave the company voluntarily,” she said.

Some workers are so worried they commute to their offices despite remote-work, or stay-at-home orders.

One manager of a CJ Group company says he punches in every other day. He is only required to come in every three days, but is determined to come in more.

“Even though the company issued a remote-work order to all employees, it feels like sitting on a bed of nails at home when I know that all the executives come into the office every day,” he said.

“I will keep with the current work flow until the company lifts the remote-work order.”

The fear of layoffs is stronger than the fear of contagion for some workers at Hanwha. The office is bustling with workers even when the company asked only core personnel to be at their posts.

Office workers have been venting their frustration online.

On Blind, an anonymous social media platform for office workers, more than 30 posts related to restructuring were posted on the platform since this February. Users have been sharing news articles on massive layoffs, pay cuts and indefinite leave. Some claimed that at least 14 of the 60 largest companies might conduct massive layoffs due to the pandemic.

One employee from Lotte Shopping said the concerns of other office workers resonate with her since her company decided to close almost a third of its 700 offline stores in the next three to five years.

The situation is devastating for workers who have fallen victim to restructuring.

One employee at OCI, a chemical company, said he’s concerned about his earning ability. OCI is the second largest polysilicon manufacturer in the world.

It recently closed down the polysilicon production plant in Korea. Polysilicon is a material used to make solar panels.

Finding another job is not an option. Many employees have rejected voluntary retirement offers and opt to hold out as long as possible due to the bad job market.

Doosan Heavy Industries & Construction offered two years of salary to any employee above the age of 45 taking retirement.

The company offered 50 million won ($41,000) of compensation for employees who have worked for more than 20 years, but the number of volunteers is below expectations.

At Doosan’s factory in Changwon, South Gyeongsang, the labor union refused the employer’s offer to go on leave while receiving 70 percent of the monthly salary.

The situation is much the same at Hyosung Heavy Industries.

Hyosung started offering early retirement to top level employees since early this year after the company struggled from higher tariffs from the United States on ultra-high voltage transformers. The company eventually decided to stop accepting requests after no one showed up to volunteer.

Experts predict the trend will continue at other companies due to the coronavirus-led slowdown.

In a survey, 74.6 percent of 489 human resource managers said they would either scale back recruitment or completely cancel their plans, according to a survey conducted by Job Korea, a local recruitment information website.

Lotte Group Chairman Shin dong-bin requested at a teleconference held with Lotte executives last Tuesday to focus on the emotional health of employees.