A high column stands at the Jongno 4-ga crossroads. The memorial tower was erected in 1996 commemorating the centennial of the Park Seung-jik Store, the origin of Doosan Group. Founder Park Seung-jik saved up the seed money from traveling around the country as a peddler and opened a linen shop there in 1896. It was the beginning of the 100-year-old company. 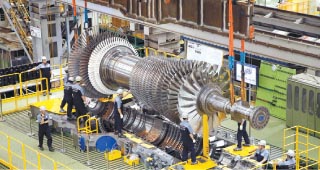 The name Doosan appeared when Park’s son Doo-byung, the founding chairman of Doosan, changed the name of the store to Doosan Store in 1946. Taking “Doo” from his first name, Doosan means accumulating one by one to make a mountain.

As Doosan expanded to the trade, liquor and construction industries, it grew into a substantial and solid mid-sized conglomerate. In the 21st century, it surprised the business world by radically transforming itself into a heavy industry-oriented company with Doosan Heavy Industries and Construction and Doosan Infracore. However, Doosan’s present is not so bright. With a slowdown in overseas construction boom and the Moon Jae-in administration’s implementation of the nuclear phase-out policy, Doosan Group was shaken and had to ask for help from its creditors.

It is concerning as it coincides with the possible beginning of an economic crisis from the coronavirus outbreak. At the time of the 1997 foreign currency crisis, Koreans saw that the country could be shaken when large conglomerates faltered. As Hanbo, Sammi and Kia fell one after another, the economic growth rate that hovered around 7 and 8 percent suddenly fell to minus 5.5 percent in 1998. The unemployment rate in February that year was 8.8 percent, and the youth unemployment rate was as high as 14.5 percent.

Of course, it is unfair to compare Doosan with many insolvent companies at the time. Doosan saw relief after the government’s infusion of 1 trillion won ($813 million). But fiscal help is limited. At this juncture, the possibility of more companies asking for help should be considered in case the economic crisis deepens.

There is much backbiting over the government’s decision to pay emergency rescue subsidies. It may be an indicator of how much the nation has grown over the past 20 years. But what saves people ultimately is not irregular subsidies but regular income, and it comes from businesses — not the state.