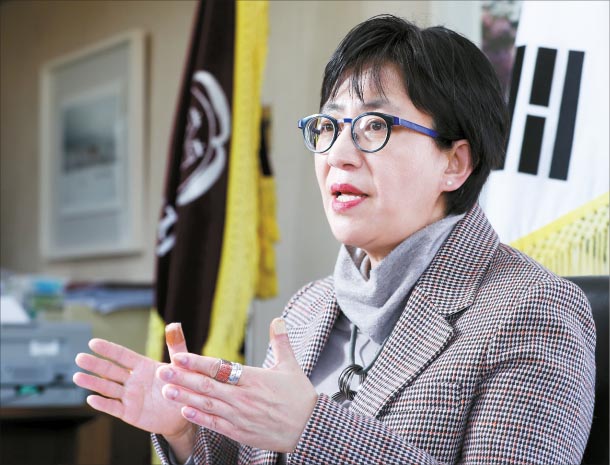 Kang Su-kyoung, president of Duksung Women’s University, talks about vision of the school which celebrates its 100th anniversary this year. [SHIN IN-SEOP]

“Live, but live your own life. Think, but think in your own way. Know, but know through your own perception.”

Upon reading this phrase imprinted on the walls of Duksung Women’s University in Dobong District, northern Seoul, a sentimental feeling may be evoked. However, it is now 2020 and current society is undergoing the fourth industrial revolution. For most Koreans, once they know that this is a 100-year quote, they may feel that it has no special relevance in the current day and age.

But for Kang Su-kyoung, president of Duksung Women’s University, which is celebrating its centennial year, this quote holds special meaning. Not only for herself, but for the future of Korean higher education.

“Self-reliance, self-determination, and self-awareness. These are the concepts that the quote implies,” explained Kang, emphasizing that “Duksung Women’s University strives to innovate, and to do so while preserving Korean traditions.”

Kang is not alone in this push for innovation in the educational system. She has the backing of the student body. The first president to win the position through direct election by the students with a 98 percent approval rating, Kang is known as a friend, educator and leader.

In the following interview, Kang, explores the history of the school and reveals the plans that the university has in store for prospective students and a higher educational institution at large.

Q. The quote was originally stated by Cha Mirisa, the founder of Duksung Women’s University. What type of person was the founder?

A. She was an independence fighter against Japanese colonial rule and an educator who was at the forefront of the Korean enlightenment movement. She was also involved in the Korean-American expatriate education organization and, driven by the spirit of the March 1 Independence movement - one of the large-scale displays of Korean resistance against Japanese colonial rule - formed the Joseon Society for Women’s Education in 1920. Afterwards, she went on a nationwide tour, giving speeches and lectures on the importance of individuals fostering expertise. Using the proceeds from the tours, she founded Geunhwa Women’s School in 1921, which formed the bedrock for Duksung Women’s University.

This year is an important turning point for Duksung Women’s University. Many universities, or higher education in general, are under severe strain due to the coronavirus outbreak. But we are slowly, step-by-step, taking necessary measures to ensure that we have a successful year. I became president of the university last year, and I feel that being the acting president for the university’s 100th year anniversary gives the position new meaning. I am honored to be in such a position, but at the same time, I feel mounting responsibility.

What is your overall approach in the coming year?

While emphasizing the basics, we aim to develop an innovative and interdisciplinary approach to education. Developing trust is a key aspect to our teaching, mainly because we want students to develop a joy for learning.

Any other important catchphrases or quotes that capture the school’s plans for the next 100 years?

“Korean nation in heart, face the world” and “Design your story, lead your future” are two of them. These catchphrases are influenced by mottos and philosophies that have already existed throughout the school’s history. Historically, the school had three main mottos: to develop a global perspective, even though the school may have been founded on national motives; to overcome gender stereotypes and widen the definition of education; and to develop an interdisciplinary approach to education.

The university seems to give students a lot of room to craft their own education.

That is correct. In order to foster their creativity, students must live through a vast array of experiences, or “stories,” if you will. This kind of experience is important for when they select their majors. [Prospective university applicants in Korea apply to a specific major. When they get admitted to the university, students must study the major that they had applied for.] Duksung Women’s University’s approach is radically different, especially starting from its 100th year anniversary.

Unless the student is planning to study in the College of Early Children’s Education or the College of Pharmacy, prospective students apply through an integrated college admissions process, which includes over 39 different disciplines. In the first year, students study a mandatory core liberal arts curriculum and have opportunities to try courses from their prospective major. They finalize their major in the second year. So far, for the 2020 academic semester, there has been a well-balanced spread of students across the 30 different disciplines.

It seems that the school is intent on strengthening its ICT program and biotechnology [BT] program.

We are aware of the recent trends in artificial intelligence [AI]. A student well-versed in software technology [such as in ICT] will become leaders in the AI field, which is why we created the ICT program. On the other hand, the university had the biotechnology program for a while. But recently, we wanted to fine-tune our approach to it, especially since it is such a broad field.

What do you think about the future of higher education in Korea?

Getting hold of information and basic knowledge is effortless in modern society. As a result, the responsibility of educators shifts as well. We should leave the information gathering to the students and teach them ways to improve their thinking process - such as their problem-solving abilities and creativity.

Is Duksung Women’s University pursuing any other changes?

While the university is running online classes [due to the coronavirus outbreak], we are promoting a wide range of new pedagogical techniques.

The university is also offering Nano Degrees and Micro Degrees as well. The Nano Degrees were made for the purpose of supplementing the student’s main major, and students earn the degree once they earn six credits through relevant coursework. On the other hand, the Micro Degree is offered for students who want a more interdisciplinary approach to their major and would like to develop the relevant thinking skills. A Micro Degree is earned upon completion of 12 credits of relevant coursework. Think of it as a certificate that guarantees that a student has done a deep study of the corresponding area of study.

Students can request professors to make a specific degree, and professors can look into making their own degrees as well.