Mom-and-pop and backstreet shops teetering on the brink

Mom-and-pop and backstreet shops teetering on the brink 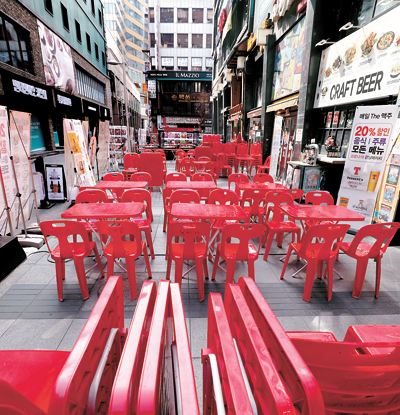 A backstreet in Myeong-dong, central Seoul, teeming with small restaurants, is empty during lunch hour. [YONHAP]

With sales and income down by about half, some neighborhood and backstreet shops expect to close in the next six months if the coronavirus crisis continues.

These establishments - secondary shops located off the main thoroughfares of shopping districts and in residential areas - feed and provide necessities for much of Korea. Normally mom-and-pop stores, they are also vital sources of work and income for many.

The outlook and estimates, published by the Korea Economic Research Institute (KERI), were the result of a survey of 32 different federations and unions overseeing 24 different types of businesses in this category, including restaurants, laundries, corner stores and hardware shops.

According to the report, sales for these companies fell by 42.8 percent on year in February and March. The surplus, which is sales minus costs, fell by an estimated 44.8 percent.

Of the 24 business categories, 22 experienced a contraction of business.

Sales at clothing shops fell by an estimated 85 percent in the two-month period. For furniture shops, sales dropped by 80 percent.

At retail establishments, sales were down by an estimated 67.5 percent, while for real estate agents and restaurants, the fall was 65 percent for both. At flower shops, sales dropped 62.5 percent.

In the survey, only delivery service companies did well. Sales were up an estimated 5 percent as more people sought to avoid face-to-face contact.

Sales at fruit shops were flat.

Backstreet and neighborhood establishments are being hit from all sides. Weak consumer demand was cited by 93.3 percent as being a problem, according to the survey. Half said that higher wages were an issue, while rent was noted by 20 percent as a source of challenges.

Almost 60 percent said tax relief is needed to support these businesses, while 53.1 percent asked for the government to simplify and speed up the application processes for receiving government subsidies.

Of those surveyed, 46.9 percent suggested the government relax loan conditions and increase direct support for businesses hit by the coronavirus.

In Korea, the Ministry of Employment and Labor submits a request to review the minimum wage every March 31. Relevant officials get together from April through June to discuss the exact amount, which is announced in August.

“Backstreet and neighborhood shops were already suffering from a contraction in real economy which continued since last year and are suffering even more from the coronavirus outbreak,” said Choo Kwang-ho, research head of KERI’s economy policy division.

“The government needs to quickly offer financial and tax support as well as delay increasing the minimum wage to lessen the damage suffered by corner store owners.”