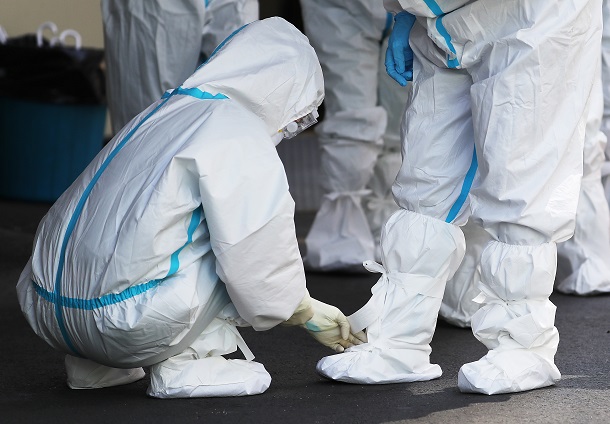 DAEGU -- A doctor died Friday after being infected by the new coronavirus which he is suspected to have contracted while treating a patient in North Gyeongsang.

He was the first medical professional in Korea to die from the disease.

According to the North Gyeongsang Provincial government and Kyungpook National University Hospital, a 59-year-old doctor who operated an internal medicine clinic in Gyeongsan, North Gyeongsang, died at 9:52 a.m. on Friday. He was diagnosed with the infection on March 18 at the hospital and was receiving treatment there.

According to the provincial government and the hospital, the doctor’s condition recently became critical. The doctor had been on a respirator and dialysis before he underwent a heart surgery but was unable to recover.

“Around March 25, the hospital decided to use an artificial respiration system on him,” said an official of the North Gyeongsang Province Medical Association. “Later, his kidney function rapidly worsened. So we put him on dialysis. Recently, he had a cardiac arrest, so we performed a stent surgery.”

According to the authorities, the doctor visited the Kyungpook National University Hospital on March 18 complaining of muscle aches. He tested positive for the virus and his conditions rapidly worsened the next day.

Authorities suspect he was infected while treating a confirmed coronavirus patient. The doctor operated a clinic in Gyeongsan, an adjacent city of Daegu where the largest number of coronavirus infections were reported.

According to the Gyeongsan city government, a man in his 70s visited the doctor’s clinic in late February and then later tested positive for the virus.

The clinic underwent disinfection measures on March 6, shut down for one day and resumed operations.
“Until he was diagnosed, the doctor wore a face mask when he treated patients in his clinic,” said the medical association official. “His condition deteriorated starting March 19, the day after the diagnosis, and he fell into a coma.”