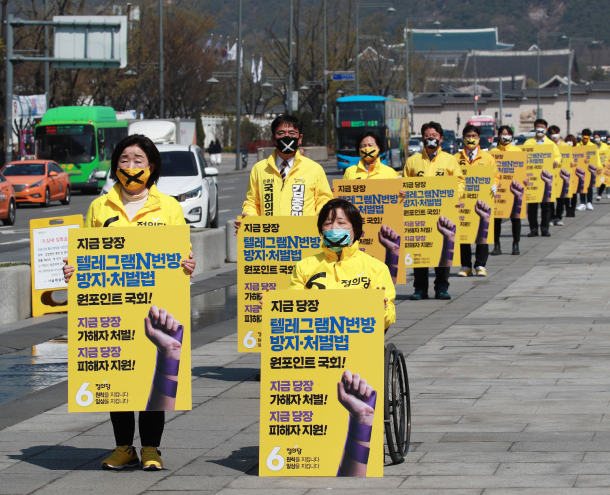 At Gwanghwamun Square in central Seoul on Monday, members of the Justice Party wage a campaign to urge the plenary session of the National Assembly to enact a revision bill to harshly punish the culprits of the “Nth room” case. The party held events at the same time across the nation as a part of canvassing for the April 15 general elections. [YONHAP]

About 10 paying members of an illegal chat room on the Telegram messenger service that distributed photos and videos of a sexual nature have been booked for possessing child sexual exploitation materials, police said Monday.

Police have apprehended Baksa room founder Cho Ju-bin, a 24-year-old, and his three accomplices, for allegedly blackmailing women into sharing sexual videos in the Telegram chat room and are now expanding their investigations into its paying members, estimated to reach around 15,000.

At least 103 people, including 26 teen girls, are believed to have been exploited in the case, in which their photos and videos of a sexual nature were distributed to the chat room’s paying members.

Cho and two of the accomplices are now facing criminal indictments, while the third co-conspirator, identified as an Army soldier, was placed under arrest Monday after a military court issued a pretrial detention warrant for him.

The Army soldier with a rank of private first class has been under police custody since Friday for allegedly distributing content of women performing gruesome sex acts under coercion in collaboration with Cho.

Police have so far obtained the nicknames of the about 15,000 paid members of the Baksa room from digital data secured from Cho and are now tracking down their personal identity information.

In a related move, the Seoul Metropolitan Police Agency raided about 20 cryptocurrency exchanges and purchasing agencies Monday to ascertain financial transactions between Cho and his paying members. Five of the exchanges and agencies were already raided by police late last month.

Through the multiple raids, police are also trying to figure out the amount of Cho’s criminal proceeds.

Police said they have first booked about 10 of the Baksa room’s paying members due to their possession of child sexual exploitation materials, adding most of them are in their 30s.