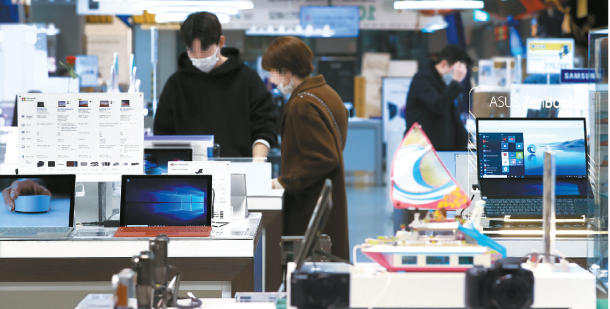 Customers shop for IT gadgets at an Emart in Seongdong District, eastern Seoul, on April 6. [YONHAP]

School’s out, but the PC is back in.

While old-school computing devices have largely been eclipsed by smartphones and other advanced devices, demand is up again as parents look for the best machine for online classes.

Elementary, middle and high schools are scheduled to gradually begin their academic calendar starting Thursday by introducing education via the internet, an unprecedented step to limit the spread of the new coronavirus.

Last month, the government notified parents that students would need one of four types of devices - a PC, laptop, smartphone or tablet - to keep up with the new way of schooling.

And with the March 31 announcement, parents and children marched into retail shops in search of an ideal option to facilitate virtual learning.

Lotte Hi-Mart, an electronics goods retailer, said that sales of desktop computers soared 105 percent between March 21 and April 6 compared to the same period last year. The sales of laptop computers jumped 65 percent during the cited period, while for tablets the increase was 75 percent.

Even if a family already owns one PC, they are shopping for another to be dedicated to the online classes and studies.

“There are different cases where a customer needs more than one PC,” said Kim Sang-hyeok, a manager at Lotte Hi-Mart, offering an example of a household with many children.

The increased demand for desktop computers suggests a comeback for devices that were in their twilight.

In 2009, 72 percent of households had a desktop computer, according to Korea Information Society Development Institute. That was the year the iPhone landed in Korea.

The portion dramatically declined, to 47.1 percent last year, as many people shifted to mobile devices for web browsing, shopping and financial transactions.

Relevant accessories have also been flying off the shelves.

WeMakePrice, an e-commerce player, said that the sale of web cameras surged 2,987 percent between March 12 and April 1 compared to the same period last year.

The sales of microphones, often used in distance learning and teleconferencing, grew 68 percent for the cited period, while laptop computers posted a 44 percent increase.

Before the public schools announced the switch toward online classes, the growth trend already started due to increased enrollment for online lectures provided by hagwon, or private institutions.

“As the school schedules are delayed more, students show up for online lectures,” said Kim Tae-young, head of the PC division at Lotte Hi-Mart.

In March alone, sales of desktops, laptops and tablet PCs increased 15 percent compared to February. February is typically the shopping time for the start of the new school year.

The preference for online courses - rather than attending brick-and-mortar hagwon - gave a boost to online education companies such as Megastudy.

“This year’s sales of online classes for elementary school students are 2.5 times higher than last year’s sales,” said an executive at Megastudy. “We achieved 10 billion won [$8.3 million] in sales in just three months, which took one and a half years since the service started two years ago. Sales of online classes for middle school students also increased more than 30 percent this year compared to last year.”