All hostess and karaoke bars and other nighttime entertainment establishments in Seoul have been forced to shut down until April 19 after a woman who tested positive for the coronavirus last week was found to have worked in a hostess bar - and had contact with over 100 people.

Officials believe the 36-year-old employee of a large hostess bar in Gangnam District, southern Seoul, was infected by a relatively obscure K-pop star who goes by the stage name Yoonhak. The 35-year-old, whose real name is Chung Yoon-hak, tested positive on April 1 shortly after returning from Japan.

So far, only the hostess’s 32-year-old roommate, who also works at the bar, has been infected.

Seoul Mayor Park Won-soon announced Wednesday in a press conference that 422 clubs, hostess bars and other establishments in Seoul in what is called the “entertainment industry” in Korean that didn’t voluntarily shut down will be forced to close until April 19, the end of the government’s so-called high-intensity social distancing campaign. 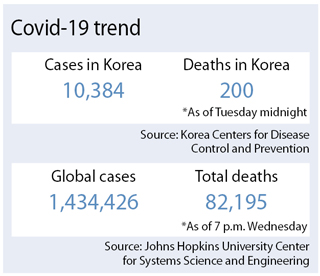 They include nightclubs in Hongdae and Sinchon, western Seoul, and Itaewon-dong, central Seoul, but not ordinary pubs, bars or noraebang singing rooms that are legally banned from serving alcohol.

The Gangnam hostess bar in question has been shut since last Thursday, the day the 36-year-old hostess received her positive test result.

Seoul’s administrative order came as the Korea Centers for Disease Control and Prevention (KCDC) announced that 53 people were newly infected with the coronavirus Tuesday, up from 47 on Sunday and Monday. 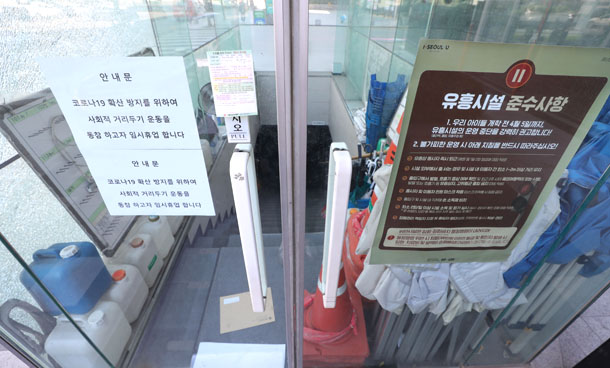 A hostess bar in Gangnam District, southern Seoul, is closed on Wednesday after a woman working at the bar tested positive for the coronavirus. [YONHAP]

By Tuesday midnight, 200 people had died, up by eight from the previous day, while 6,776 people had been declared fully recovered, up by 82 from the day before.

Of Korea’s 53 new cases, 24 were imported from a foreign country. Among the nation’s 10,384 total, 832 people, about 8 percent, were imported, mostly from Europe and the Americas.

In explaining the operation ban, Seoul Mayor Park said Wednesday that his office has continuously carried out inspections of 2,146 entertainment businesses in the city and had recommended some to temporarily close, but that 422 establishments remained open.

“In light of the fact that close physical contact is unavoidable in those places due to the nature of the industry,” he said, the city has “decided to hand down the stern measure of a congregation ban,” which is technically an administrative order telling businesses to “shut down” until April 19, Park continued.

According to Seoul officials, 118 people had been identified by Wednesday morning to have had contact with the 36-year-old Gangnam hostess. She told officials that she started feeling symptoms of the coronavirus on March 29, visited Gangnam’s community health center on April 1 and received her positive test result the next day.

What she apparently lied about last week is the fact that she’s employed at a popular hostess bar, and from the evening of March 27 throughout the morning of March 28, she went to work. Exactly how many people she had contact with at the bar is currently being investigated, but Gangnam officials said the woman had contact with at least 118 people around the time she started manifesting symptoms of the coronavirus.

Officials believe she contracted the disease from the K-pop singer Chung, who she met on March 26. Chung is the leader of a five-member boy group called Supernova, which debuted in 2007.

Chung had returned from Japan on March 24 and started feeling symptoms on March 27. He went to a community health center in Seocho District, southern Seoul, and received his positive test result on April 1, one day earlier than the hostess, Seoul officials said.

Local news agency News1 cited a spokesperson from Chung’s agency Tuesday as saying that the singer did not visit the hostess bar and that he and the female were “originally acquaintances” who “briefly” met after Chung had returned from a Japanese business trip.

Officials believe the female’s 32-year-old roommate, who also works at the bar, did not have contact with as many people as the 36-year-old because she started feeling symptoms on Sunday, and the bar has been closed since last Thursday.

The hostess bar uses two underground floors of a hotel in Gangnam, with each floor being about 660 square meters large, some 220 pyeong or 7,104 square feet.

On a similar note, the Korean central government announced Tuesday that local government officials and police officers will team up from 11 p.m. to 4 a.m. everyday over the weekends to carry out joint inspections of the country’s nightclubs and other entertainment establishments that specifically involve dancing to see whether the businesses are abiding by the government’s social distancing campaign rules.

The intensified inspections will kick off this weekend, said the Central Disaster and Safety Countermeasures Headquarters, the Korean central government’s coronavirus task force.

On Wednesday, the task force once again recommended all private cram schools, which are known as hagwon in Korean, churches and indoor fitness facilities across the nation to temporarily shut down, and in case they decide not to, follow stricter health guidelines.

If they fail to abide by the more stringent rules, the task force warned they may face effective operation bans.