BOK holds rate but admits growth will be near zero

BOK holds rate but admits growth will be near zero 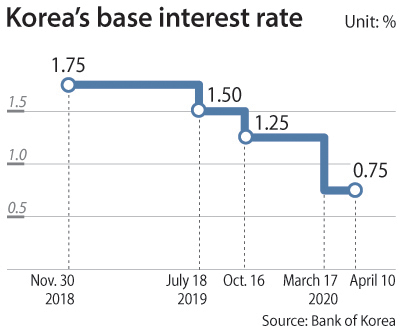 The central bank said Korea is not likely to reach 1 percent economic growth this year considering the coronavirus pandemic, hinting that if the outbreak doesn’t subside, a recession is possible - as is a cut to interest rates.

The Bank of Korea (BOK)’s monetary policy board held the base rate at 0.75 percent Thursday at a regular meeting, saying it would watch the market and evaluate the latest stimulation measures, which include a big rate cut last month. The bank made a surprise cut of 50 basis points on March 16.

“It won’t be easy [for the 2020 economic growth rate] to reach the 1 percent level,” said BOK Gov. Lee Ju-yeol in an online briefing Thursday.

“Yet, the figure is extremely changeable depending on the progress of the coronavirus,” Lee said. “In the most basic scenario, however, the country’s growth rate for this year will be able to surpass zero.”

The basic scenario, according to Lee, refers to a situation in which the outbreak subsides in the second quarter and the economy starts to rebound in the third quarter.

It also means that if the global pandemic doesn’t fade out by the second quarter, like the bank expects, the growth rate has the possibility of sinking below zero.

The bank forecast the country’s GDP would grow 2.3 percent in December, only to adjust that to 2.1 percent in late February when the coronavirus started to affect Korea’s economy but wasn’t yet a pandemic.

The Korea Economic Research Institute made a forecast Wednesday that Korea’s economy would shrink 2.3 percent this year. It is the first time the institute released a minus growth outlook for the country since the 1997 Asian financial crisis.

Out of seven members of the monetary policy board, Cho Dong-chul and Shin In-seok dissented and voted for a 0.25 percentage point cut at the meeting Thursday.

“Although inflation and growth rates are expected to fall short of the existing outlook by a large margin as Covid-19 spreads across the world, [the BOK] decided that it would be better to wait and see the effects of fiscal, financial and monetary policies before taking the next step,” said Lee.

Instead of lowering the base rate, the bank is focusing on other liquidity measures to prevent a possible credit crunch in the finance industry.

Prior to the base rate announcement, the bank said it would add special bank bonds such as those issued by the Korea Development Bank and Export-Import Bank of Korea, as well as mortgage-backed securities, to a list of bonds it can purchase to boost liquidity for the financial industry.

Gov. Lee said although the maneuvering room for an additional rate cut has decreased due to the 50 basis point cut last month, the BOK is still able to “counter the situation with monetary policy in May if necessary.”

“It is hopeful that the central bank is showing strong determination to counter the economic slowdown derived from Covid-19,” said analyst Kim Ji-na from IBK Securities.