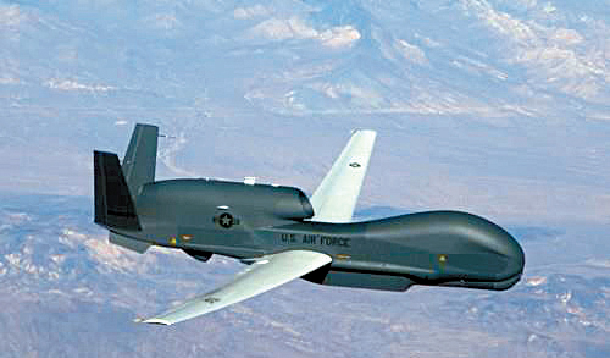 Two more units of the Global Hawk high-altitude unmanned aircraft are expected to arrive in South Korea this month, sources said Thursday, a move expected to further boost the country’s surveillance capabilities against North Korea and beyond.

Air Force officers and the manufacturer, Northrop Grumman, have been working to bring in two additional units within this month, though the exact schedule is subject to change, according to the government sources. One remaining unit is also expected within the first half, they added.

The Air Force said it has been working to put the aircraft in operation by the end of this year. Late last year, it set up a reconnaissance squadron in charge of the asset.

No ceremonies to mark their introduction or deployment are planned, according to the military. Such a low-key stance appears to be, at least in part, in consideration of strong complaints from North Korea.

As one of the most advanced intelligence-gathering platforms in the world, the long-endurance unmanned aerial vehicle is capable of performing reconnaissance missions for around 40 hours at a time at an altitude of roughly 20 kilometers (12 miles).

Equipped with a state-of-the-art “multi-platform radar technology insertion program” ground surveillance radar sensor, Global Hawk can perform tasks at a range of up to 3,000 kilometers and distinguish objects on the ground as small as 30 centimeters (12 inches) across, which is expected to enhance Seoul’s reconnaissance capabilities in the face of persistent threats by North Korea, as well as growing security challenges from neighboring countries, according to the officials.