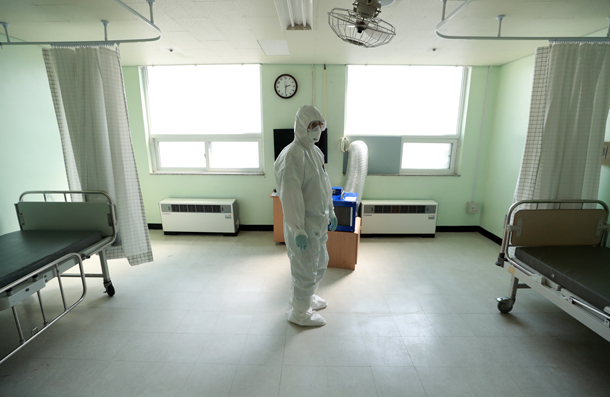 A medical worker checks on an empty ward at the Armed Forces Daegu Hospital on Thursday after a patient was discharged. According to the Korea Centers for Disease Control and Prevention on Friday, no new cases were reported in Daegu as of midnight Thursday, for the first time in 52 days since the city confirmed its first patient. [YONHAP]

Korea recorded 27 new cases of coronavirus infections on Thursday, the first time the number of new cases has fallen below 30 in 50 days, the public health authorities announced Friday.

According to the Korea Centers for Disease Control and Prevention (KCDC), the number of new cases on Thursday was the lowest since the country recorded 16 new patients on Feb. 20. Korea’s total number of cases was 10,450 as of Thursday midnight.

For the first time in weeks, Daegu had no new cases. The metropolitan city with a population of over 2.43 million has been hit hard since a cluster outbreak linked to the Shincheonji religious sect in February. Since a Shincheonji follower was confirmed as Daegu’s first patient on Feb. 18, the number of cases in the city skyrocketed to 741 on Feb. 29.

As of Friday, Daegu’s total number of cases was 6,807 and neighboring North Gyeongsang 1,327.

Starting in April, the daily increase of new cases drastically dropped in Daegu, even recording single-digit figures this week. Four new cases were seen on Wednesday, the authorities said Thursday.

Despite the drastic decrease in new cases, the authorities urged the public to continue practicing social distancing.

“We must be extremely cautious that people do not gather in the highly populated capital region, famous tourist destinations for the spring flower blossom season, [April 15 general elections] campaign venues or for the Easter weekend,” Vice Minister of Health and Welfare Kim Gang-lip said Friday during the daily media briefing.

According to the KCDC, five of the 27 new cases nationwide were patients who recently entered Korea from overseas. While the number of community-spread infections has steadily decreased in recent weeks, more imported infections were reported. This week alone, 96 new cases were attributed to people entering the country from Asia, Europe and the United States.

Regional breakdowns for Thursday’s 27 new cases showed that Gyeonggi had nine new patients, North Gyeongsang seven and Seoul five. Four of these cases were detected during the airport immigration and quarantine checkpoints.

On Thursday, 144 people had fully recovered from the disease and ended isolation protocols, bringing up the total number of cured patients to 7,117. According to the KCDC, 3,125 people are receiving medical treatment under isolation.