From a pretty face to businesswoman: Ulzzang star Hong Young-gee is now a successful entrepreneur and mother hoping to help the world

From a pretty face to businesswoman: Ulzzang star Hong Young-gee is now a successful entrepreneur and mother hoping to help the world 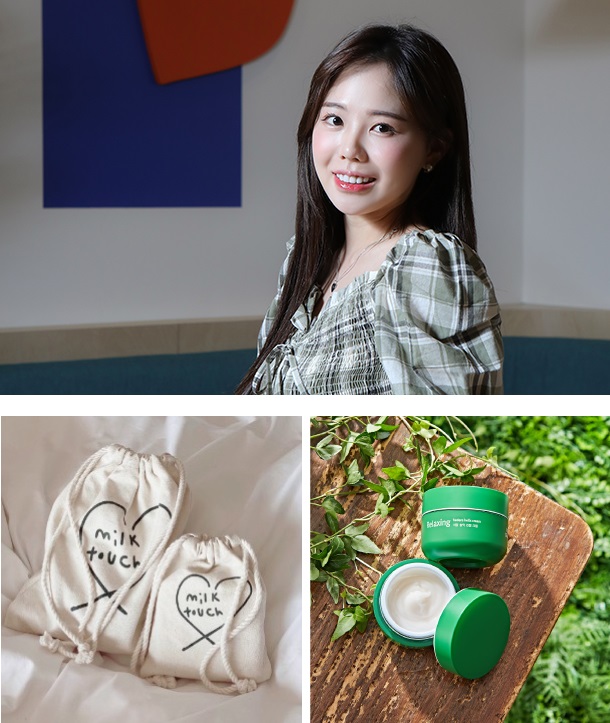 Top: CEO Hong Young-gee poses for a photo after an interview with the Korea JoongAng Daily at the Milk Touch office inside WeWork in Seoul Square, central Seoul. [PARK SANG-MOON] Above: The pouch that carries Milk Touch products when delivered to customers, left, and English Ivy Cream, which can be used by everyone in the family, right. [MILK TOUCH]

TURNING 20 FIFTH IN A SERIES

We’ve all had our coming-of-age moments growing up, unless you’ve managed to travel through time (in which case we’d love to interview you).
The Korea JoongAng Daily is turning 20 this year. We’ve had our own coming-of-age moments, but rather than boring you with stories about us, we decided to bring you stories of people who have their own special memories with the number “20.”
Here’s a person who started a new chapter of her life at the age of 20. 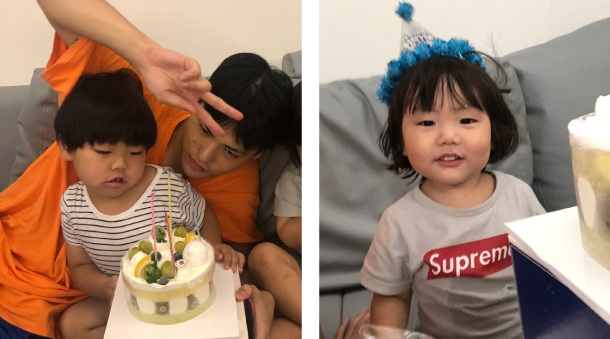 Hong Young-gee’s family is made up of her husband Lee Se-yong and their first son Jae-won (top) and second son Zet. [HONG YOUNG-GEE]

While the concept of influencers hasn’t been around for long, over 10 years ago, there was an equivalent kind of figure in Korea, known as ulzzang or eoljjang. The word - a portmanteau of eolgul and jjang, meaning “face” and “best” - referred to “people with the best faces.” These stylish youngsters became famous for their ideal looks mainly through the then-popular social media platforms like Cyclub or Buddy Buddy and gained fans and followers there - not unlike the influencers of today.

Although the age of ulzzang has passed by, these people are now thriving in their own respective fields. Among them is Hong Young-gee, the CEO of two online shopping malls - Milk Touch and On The Flow - and a mother of two sons.

Born in 1992, Hong was one of the most popular figures in the early to mid-2000s, when young girls and boys alike would save her picture to their phones or computer and share it with each other. She was the No. 1 pick for girls when it came to putting a face to the main character of popular novels or comics, even though most were never made into films. She finally made her official debut in 2009 as a part of a TV show called “Ulzzang Shidae” (Ulzzang Era), where she would appear with other ulzzang stars and pull off missions like a common variety show.

Hong proved that she was more than just a pretty face on TV, showing off her humor and eloquence, winning the hearts of many with her clever jokes. That also led to the success of the online shopping malls she was running, emphasizing her ability as a businesswoman as well. She was an early adopter to the YouTube scene, starting off her channel YounggeeTV in 2013 with her boyfriend Lee Se-yong, also an ulzzang himself. And a year later, she came out with the news that shocked everyone.

“I know that you are very well aware of the relationship between me and my partner Lee Se-yong,” she posted on her Facebook. “It’s been two years since we met and we love and support each other from the bottom of our hearts. During our relationship, we were gifted with a life. And through many obstacles, I gave birth to a precious child with the blessing of our parents.”

Her quasi-celebrity status had everyone in the country - at least those that followed the ulzzang culture of the 2000s - talking about Hong and her family. While some were pointing fingers, others supported her decision and praised her bravery. In a society closed off to the idea of people getting married at a young age or any other form of “atypical” relationships, Hong has survived the storm of hostile words thrown at her over the years and successfully launched her first skin care and cosmetics brand Milk Touch last April. The brand recently announced that its products will be sold in 100 shops across Japan and Taiwan and celebrated its first anniversary on April 3.

From a teenager just excited to be recognized, to now a mother of two and the owner of a successful brand, the life of Hong Young-gee has been a ride that she calls “a spectacle.” The Korea JoongAng Daily sat down with Hong to learn more about her life, her family and business. The following are edited excerpts.

Q. Your new cosmetics brand Milk Touch celebrated its first anniversary earlier this month. Why did you begin a skin care brand?

A. I worked in a lot of skin care and cosmetics companies, as either a marketer or a model. And in a lot of cases, the owners would just take an old product sample from a factory, put on a different label and call it new. Their mindset was that they’re not going to be the ones using it, and it made me really fed up. I wanted to make a brand that I can use, and my friends and family can use too.

When I thought about what my brand was going to be, I wanted it to be something that would make me say, “I made it for the people I know - my friends, family and my children.” This has always been the core value, and we just came up with a slogan a couple months ago. “Until our sincerity is felt by the customers - an experience beyond skin care.”

Your first product was Marshmallow Foundation. What made you choose to release that first?

It’s usually the case that newly-launching cosmetics brands begin with lip products, because customers are more willing to try them and it gets public attention in a shorter amount of time. But I wanted to start with a foundation, because I never had a foundation that I could settle with. I don’t have bad skin, but I do have complexities, like my freckles that I want to hide. At the same time, it should be really light. It also had to last long, because I work long hours too. It took me a year to get it right, and the team had to work over and over and over to get it right. By the time we were done, we were so tired.

Thankfully, the foundation got good feedback from customers, and the following products did well, too. Our biggest seller now is the English Ivy Cream that I made especially for children and people with sensitive skin. I’ve learned while raising kids that children develop skin allergies often, and this is the cream that I can proudly recommend to people who have those skin problems and all their families.

What do you think appealed to the customers?

English ivy isn’t a common ingredient used for skin care products, and I don’t think many others use it. It’s quite costly as well. So it did take us some time to convince people, but the best way was to show people every day - through YouTube and Instagram and other means - that I actually used it with my family. When people start believing, they start buying. Then we would take the reviews that people post and apply for clinical trials to scientifically prove people’s reactions. That works to appeal to people positively and it creates a synergy.

Other than Milk Touch, you also run an online retailer called On The Flow. How long have you run that service?

I actually began selling clothes when I was 17. But I changed the name around often, and it’s only been five years since On The Flow began.

From when I was really young, I had to take responsibility for a lot of things. Honestly, if that hadn’t been the case, I would have just spent everything I earned and not cared about anything. But when I was young, my father was in debt, and I had to work to pay it off. So I did. I bore a lot of responsibility on my shoulders and that kept me running my business. It did and does take a mental toll on me, but I think I tough it out well. I actually just can’t lie still. You could give me a year to just relax and do nothing, and I’d end up starting another business.

It must have been hard to have a child at 20 while also running your own business and taking care of both. What was the hardest part?

The years went by so quickly that I can’t actually remember the details of it. I had a lot of siblings growing up, so raising children itself wasn’t that hard. My parents helped a lot as well. But having children felt like, for me, climbing a really steep mountain while carrying two people. I had to take care of myself, but the two little ones needed help with everything.

A thing that was hard was that I couldn’t get our marriage certified because my husband was under 20 at the time I had the baby. We needed his parents’ approval, but there aren’t many parents that would let their child get married before 20 (laughs). So we waited until he reached his age before we could get our legal marriage certificate. And before then, our kids couldn’t be registered under the both of us - my son was just certified as Young-gee’s son and not a couple’s son. I’m not saying that young people should start marrying and that it should be easy for them to do so, but the current system does make it hard for young couples.

What was it like raising a child and running a business at the same time when your husband was a student?

I had to work until right before my first son came, until my belly was so big. My body hurt so much, so I had to have other people run much of the business, which meant sales went down. So I could only rest for a month and then I had to go back to my job. I thought I was okay because I was so young, but I felt so cold all the time. It really took a big toll on my body, and I was even wearing padded coats in the summer because my bones always felt so chilled. My bones and joints didn’t heal properly and it still hurts. So for my second child, I took two months of full rest, but I still had to go back early.

As a business owner, I’d like to be a fancy CEO who has all the bodyguards following the car out of a big building (laughs). Like, having a secretary run you down your daily schedule and have people wait next to you. And I’ve always had this goal, that I would save 5,000 children. I’m making small donations and helping in ways that I can, but I’d like to do something bigger and take care of them myself. I think of it as a calling.

As a person, I’d just like to live with a happy family. I wish my husband will live long and that I’ll live long too. It’s like how people say that your partner becomes a friend. I’d like to live with my husband for a long time and talk to each other like friends, traveling around altogether with the children. I’d like my children to know that I love them, in the way that they understand love.