Almost all arrivals from U.S. must now be tested for Covid-19

Almost all arrivals from U.S. must now be tested for Covid-19

Catholic priests keep distance from one another without a congregation at Gyesan Cathedral in Daegu Sunday, as Easter service was streamed live on YouTube to prevent the further spread of the coronavirus. [YONHAP]

Starting today, all Koreans and long-term traveling foreigners from the United States will be required to be tested for Covid-19 within the first three days of their landing in Korea, even if they are not showing any symptoms.

Local officials announced the revised health guidelines Sunday, saying they will have to go through the same procedures as those coming from Europe, as Korea has recently seen a rising number of imported cases from the United States.

In the previous health guidelines, people arriving from the United States were told to self-quarantine for 14 days, the incubation period of the virus, and get tested only if they had symptoms of the virus.

Under the new system, all Koreans and long-term travelers of a foreign nationality arriving from the United States not only have to be quarantined at their home or at a government-run isolation facility for two weeks, they also have to be tested within their first three days in Korea. Short-term travelers from the United States of a foreign nationality, who intend to stay in Korea for 90 days or less, will be told to abide by the same health guidelines as before, which is to get tested if they show any symptoms during their 14-day quarantine period. 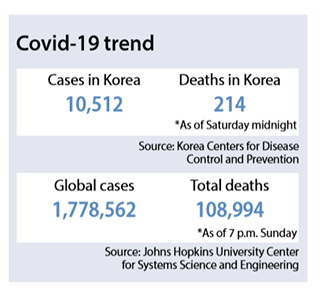 Exceptions to the self-quarantine rule are a few specific visa categories coming for short-term stays, such as diplomats and businessmen who had received special waivers. They still have to get tested at the airport.

Anyone who tests positive will be transferred to a hospital or a government-run isolated treatment facility depending on the severity of their conditions.

The revision came as the number of new infections reported daily have fallen in recent days to around 30, far lower than the 100-something new infections each day just three weeks ago, but still not low enough for the general public to let their guards down, health officials said.

On Saturday, officials also announced that Korea had reached the milestone of having a recovery rate of over 70 percent.

According to data from the KCDC Sunday, 343 people out of the 912 imported cases were specifically from the United States, accounting for about 37.6 percent of all infections from overseas. Over the past two weeks, Korea counted 459 cases brought from foreign countries, and 228 of the cases, about 49.7 percent, were traced to the United States.

“Many local government offices are already testing people from overseas, so [the central government has decided to] make the tests a government guideline [for U.S. arrivals] so that we can support the examinations with the national budget and have more people get tested,” Jung stressed.

As local government offices complain about overseas returnees disobeying their two-week self-quarantine orders and exploiting loopholes in the system, Prime Minister Chung Sye-kyun announced Saturday that those who’ve been busted for violating self-quarantine will be asked to wear electronic wristbands for the remainder of their isolation period so that local governments can better track their whereabouts.

The issue had been a hot topic of debate because some critics viewed the device as a human rights violation in light of the fact that it seemed similar to the ankle bracelets worn by some criminals, such as sex offenders.

However, the new system will be based on consent, which means that quarantine violators who wish to not wear the devices do not have to. Officials explained there are no legal grounds to force people to wear the wristbands. Critics say the devices will not prove to be effective because most people won’t voluntarily wear them.

As for the hostess bar in Gangnam District, southern Seoul, which shut down on April 2 after a 36-year-old hostess contracted the coronavirus from a relatively unknown male K-pop star, Seoul officials said Sunday that no additional infections have been traced to the worker other than her 32-year-old roommate, who also works at the bar.

Among the 116 people that the 36-year-old hostess had contact with at the bar, including her colleagues and customers, 114 have tested negative for the coronavirus as of Sunday, Seoul officials said. Officials explained that the remaining two people could not get immediately tested because they recently had plastic surgery, adding that they’ll be tested soon.

For Easter Sunday, churches across Korea varied in how they celebrated the annual holiday, with some pressing ahead to hold services inside their buildings and disobeying the government’s social distancing campaign rules, while others held services online or invited congregants to large parking lots where people listened to the sermons from their cars.