After years on stage, K-pop star moves to movies: Heo Ga-yoon plays a hacker in upcoming film ‘Search Out’

After years on stage, K-pop star moves to movies: Heo Ga-yoon plays a hacker in upcoming film ‘Search Out’ 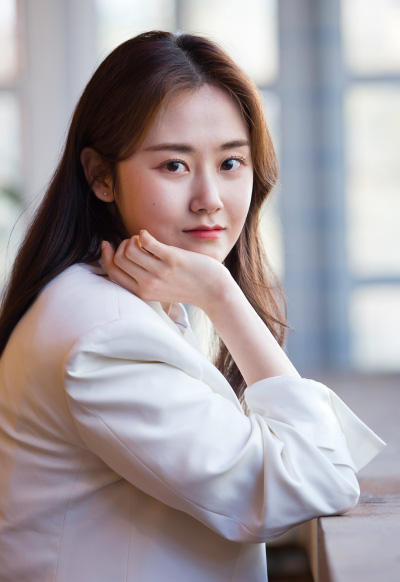 For seven years, Heo Ga-yoon was a member of the hit girl group 4Minute, performing on stages all around the world. But now, she’s ready to start all over again to achieve her childhood dream of becoming an actor.

In the upcoming mystery thriller movie “Search Out” Heo is playing a lead role for the first time. She plays a genius hacker named Noo-ri who, along with Sung-min (played by Lee Si-eon) and Joon-hyuk (played by Kim Sung-cheol), tries to catch the culprit behind a cyber crime that is convincing lonely and secluded people to take their own lives.

Although Noo-ri seems cold and cynical at first, viewers eventually learn that there is a reason why she has had to toughen up. She has a dark past of her own and struggles with depression.

“She is very strong and says whatever is on her mind without really caring for what others will think of her,” Heo said in an interview at a cafe in Samcheong-dong, central Seoul, last week. “In a way I think she represents a side of young people today. From the perspective of the older generation, we may seem defiant and like we don’t have a care in the world because we express what’s on our minds. But I think that young people may be doing that to hide their pain. It is the same for Noo-ri too.” 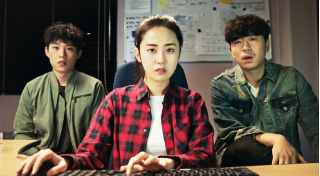 In “Search Out,” from left, Joon-hyuk (Kim Sung-cheol), Noo-ri and Sung-min (Lee Si-eon) work together to catch a culprit. The film arrives in theaters on Wednesday. [STORM PICTURES KOREA]

“I applied to be a student in the department of theater and film at a university and was accepted,” the actor admitted. “But the company gave me an ultimatum: Do you want to debut with 4Minute or go to college? Of course I chose the former,” she said with a laugh.

In her seven years with 4Minute, Heo rarely appeared in TV series or films.

“Since I was the main vocalist, I couldn’t be exempted from any performances,” Heo explained. “Although I really wanted to build up my acting career too, the agency would always coax me into saying that I could always try [acting] later and for now concentrate on showing my talent as a singer.”

“If I was able to juggle both singing and acting when I was in 4Minute, it would have been different,” the actor said. “But I couldn’t. My voice isn’t going to disappear suddenly because I don’t sing. I can turn to musicals or maybe drop a surprise album after I build up my acting career.”

When asked if she faced any difficulties while trying to start her career all over again, Heo surprisingly said that she wasn’t aware that 4Minute was such a popular group.

“We, [the members], were always dissatisfied with our albums in one way or another,” Heo reminisced. “We were always pushing ourselves to do more, but when I look back now, I guess we did pretty well, but we didn’t know it. The members and the agency staff still meet now and then, and they say that they still get requests [from current girl groups] to make songs or looks similar to our song ‘Crazy.’ I felt really proud of that.

“But as popular as the group was, it became harder for me [to broaden my image as an actor] because people continue to see me as ‘4Minute Heo Ga-yoon’ instead of an actor. But, that’s my own problem that I hope to eventually resolve [through my acting],” Heo said.

Her first attempt at getting rid of her singer image came through the 2018 film “The Drug King.” Heo had went to the audition without any hopes that she would land a part, but director Woo Min-ho, who did not know that she was a member of 4Minute, said that her acting was “fresh” and asked her to play a minor role in the film.

“I never knew that being ‘fresh’ was a compliment,” Heo said. “But when I heard that, I was encouraged, and to be on the set with such veteran actors like Song Kang-ho was once-in-a-lifetime experience for me. Although I was a rookie, he read lines with me and offered me so much advice on how to deliver my lines. I gained more than what I contributed to the film.”

Her first lead role may have come a little later than she’d anticipated, but the actor said that she’s alright with that.

“Recently I had time to rest, and that changed my perspective,” Heo confided. “I was so busy for seven years as a singer and never really had any time to relax. After the group disbanded, I felt empty and lonely, but also anxious and impatient [to start acting]. But I finally gave myself some time off to organize my thoughts, and now I’m okay. I mean, it took me six years to become a singer, and it’s been only three years since I started to act. So I decided to be patient, but ready at any moment to show off my various sides as an actor.”

Heo says that she wants to try her hand at as many roles and genres as possible, since she’s still a young actor without much experience.

“Come to think of it, I learned what I was good at as a singer as I built up my experience in 4Minute,” Heo said. “I want to find out what I’m good at, and I am quite curious to see how I’m portrayed on screen through various roles.”