Campaign ends with pledges and accusations

Campaign ends with pledges and accusations 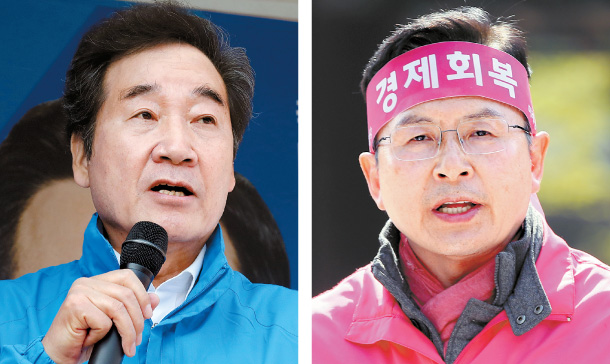 On Tuesday, the eve of the general elections, Lee Nak-yon, left, co-chair of the ruling Democratic Party’s election committee, and Hwang Kyo-ahn, right, chairman of the main opposition United Future Party, campaign against each other to represent Jongno District, central Seoul. [YONHAP]

Last-minute promises and claims on the stump by leaders of the ruling and opposition parties sparked controversy Tuesday as both tried to rile up their bases on the eve of today’s general elections.

“The Democratic Party [DP] and I will do our best to pay emergency disaster relief funds to 100 percent of the people,” said Rep. Lee In-young, floor leader of the ruling DP, on Tuesday.

The disaster relief funds to help the country recover from the coronavirus outbreak are supposed to go to 70 percent of Korea’s households and particularly the needy. Lee made the pledge in a speech supporting Ko Min-jung, former spokeswoman of President Moon Jae-in, in Seoul’s Gwangjin B District. Ko is running against former Seoul Mayor Oh Se-hoon of the main opposition United Future Party (UFP). The DP has scrambled the jets to help Ko defeat Oh, a potential conservative presidential candidate.

Lee is one of the co-chairs of the DP’s election campaign committee. He has been touring key districts with neck-and-neck races against the UFP.

“If Ko is elected, Gwangjin District residents will be excited the most, and President Moon will also be happy,” Lee said. “If Oh wins, [UFP] Chairman Hwang Kyo-ahn will become happy. What choice will you make?”

Oh condemned Lee’s campaign pledge. “He is telling voters to vote for Ko if they want to receive money,” Oh wrote in a Facebook posting. “This is the worst way of buying votes.”

“It’s like an elementary school kid who promises to buy his classmates hamburgers if they vote for him as student council president,” said Lee Jun-seok, a UFP Supreme Council member.

Park Hyung-joon, co-chairman of the UFP’s election campaign, also criticized Lee for trying to buy votes with taxpayers’ money. “The people must make a stern judgement on the ruling party’s and government’s attempt to use the coronavirus outbreak to influence the election,” he said.

The UFP faced its own criticisms from the DP after its chief campaign manager questioned the integrity of the flattened coronavirus curve - and the government’s claim to have handled the outbreak well.

“As the general elections neared, authorities set a new guideline that suspected patients will take coronavirus tests only when their X-ray tests show that they have pneumonia,” the UFP’s chief campaign manager Kim Chong-in said Tuesday. “It was a strategy to reduce the number of confirmed cases before the general elections. Doctors from around the country are sending letters that the number of infections will skyrocket after the elections.”

Kim was referring to a claim by a doctor from a hospital in Incheon in a Facebook post that the government is applying a new guideline, blocking doctors from sending patients for coronavirus tests ahead of the elections. The doctor said tests were only being allowed when suspected patients’ CT or X-ray scans show pneumonia.

The doctor’s claim was made after the Korea Centers for Disease Control and Prevention (KCDC) updated its guideline on March 2. In an earlier guideline, the KCDC said tests should be administered on people in whom doctors suspect coronavirus infections. The new guideline, however, said tests should be administered to people suspected of being infected for such reasons as having pneumonia without a known cause.

The doctor’s claim was dismissed by Vice Health Minister Kim Gang-lip on Monday. “The new guideline mentions pneumonia without known cause as one of the situations that requires a test,” he said. “It remains unchanged that a doctor can ask for a test if there is a suspicion of infection. Until now, we’ve never rejected a medical institution’s request for a test by questioning a doctor’s judgement.”

Jung Eun-kyeong, head of the KCDC, also dismissed the doctor’s claim. “We’ve never artificially reduced the number of tests or made an attempt,” she said Monday. “It is impossible for us to influence a doctor’s clinical judgement. Public health authorities respect the doctors’ judgements.”

According to the central disaster management headquarters, a daily average of 7,627 suspected cases was reported from April 5 to 11, lower than the daily average of 9,584 from March 29 till April 4. It said the number went down because the country is seeing a decrease in infection clusters.

The ruling DP also criticized UFP campaign chief Kim for attacking the public health authorities with groundless claims. “I know Kim is very busy with the election campaign, but he should at least read newspapers and the government press releases,” Kim Sung-hoi, a DP spokesman, said Tuesday. “He should feel ashamed for having spread fake news.”

“I am shocked to see Kim thinking that the people will vote for the UFP, if he uses the coronavirus outbreak to discredit the government and the central disaster management headquarters,” the DP spokesman continued.